This has been a bad year weather-wise for the land speed racing community. Bonneville gave us slush due to too much rain and this weekend’s El Mirage meet was scrubbed due to, you guessed it, rain.

That left us with a big problem as to what to do on Friday, Saturday and Sunday. Never fear, our friends at the NHRA solved the problem for us by putting on another California Hot Rod Reunion at Bakersfield. Looks like we had to go.

But first a little recap of some of our weekly adventures. We got another surprise package from Jere Sheehan. Inside was a document titled The California Highway Patrol Hot Rod, Motorcycle and Sports ar Safety Program. It was dated January 1, 1954. It seems the CHiP’s were more than a little concerned that over 160,000 Hot Rod and Sports Car drivers and 55,000 Motorcyclists were using public streets and highways and that they were “Speed Minded”. They stated that this situation wasn’t too much of a problem before WWII (right), but after, citizen’s complaints about racings about racing on public highways poured in so something had to be done. Some laws were changed to the chagrin of some but we also have to thank the likes of Pete Petersen and Wally Parks for their tireless work on selling the establishment that we weren’t all bad guys. A few short years later some big companies in Detroit picked the rodders’ brains and decided they could build hot rods too, by the millions, and sell them to little old ladies as transport to church and the grocery store. I guess you could say those street racers corrupted the rest of the U.S. and the World. Cool!

We were also burning the candle at both ends making those stacks of 8” x 10” photographs needBC_811 dates from 1965 and is an “Official” Indianapolis Motor Speedway photo. Better yet it was stamped on the back as a surplus photo print. Its special price was half a buck. Where were we when the sale was going on? Car builder Fred Gerhardt took a big leap and constructed four rear-engined cars for that year’s race. He sold three of them and kept one for himself and contracted with George Snyder to drive it. The lavender and yellow car had a 251″ Offy residing behind the driver and started the race on the outside of the seventh row in 21st place. George managed to complete 64 laps before the rear end gears decided to go on vacation and was credited with a 21st place finish. What’s amazing is all four cars made the field and Mickey Rupp drove one to a sixth-place finish.

Here’s a lead-in image to those funny drag race cars we saw this weekend (JMC_4445). Max Musgrove did this wild drawing that appeared in the Readers’ Drawing Board pages of the October 1962 issue of Custom Rodder. The ’32 Ford Roadster featured a Chrysler Hemi fitted with dual superchargers and 10 carbs. Note the wild rake.

Lets fast forward eight years and look at a real funny looking car (GCC_186). Recently retired NHRA Announcer Bob Frey has been hard at work trying to document drag race results and we just received his spreadsheet covering the 1970 season. His hard work just made our life a little easier. This George Callaway shot was taken at Ontario Motor Speedway back on November 21, 1970, and shows Don “The Snake” Prudhomme during qualifying. He ended up as the top dog with a time of 7.044 seconds and a speed of 200.00 mph. In the first round, he faced off with Richard Tharp who had qualified in ninth place with a time of 7.191 seconds. When the Christmas tree went green the “Snake” broke and Tharp went on to win the round with a speed of 202.70 mph in 6.960 seconds. Tharp went on to win in round two and broke in round three. Thanks to George for the picture and thanks to Bob for the results.

JMC_4464 shows driver Mark Sanders’ carbon fiber bodied Ford Mustang AA Funnycar at the 2013 edition of the California Hot Rod Reunion at Bakersfield during the first round of eliminations on Saturday, October 19th. Mark had just staged and his intense crewman is either pointing out a spot of dirt on the windshield or indicating where the tach is. Just kidding.

We were cruising the pits between rounds and spotted the wild-looking red and black ‘57 Chevy sporting a monster bug catcher (JMC_4467). I’m thinking this rig would turn more than a few heads cruising down Woodward Avenue.

No, this one doesn’t need a new set of rings, the smoke is courtesy of a heavy right foot putting some heat into those large rear tires (JMC_4461). Driver Marc Meadors plays with street rods during the week at his dad’s Goodguys operation but has been playing hooky lately making a name for himself as almost unbeatable.

The Reunion weekend is all about classic old railjobs and this one fits the bill perfectly (JMC_4466). This Fuel Dragster dates from 1958 and was built by the Julian Brothers. It’s powered by a 440″ Pontiac and sports a few MT go fast parts. It’s the real deal and won the B-Fuel class at Half Moon Bay the weekend after the first March meet, held back in ’59.

DBC_811 dates from 1965 and is an “Official” Indianapolis Motor Speedway photo. Better yet it was stamped on the back as a surplus photo print. It’s special price was half a buck. Where were we when the sale was going on? Car builder Fred Gerhardt took a big leap and constructed four rear engined cars for that year’s race. He sold three of te were lucky enough to capture the man suited up in his Deist silver suit right after he had slid into the driver’s seat but before he was pushed down to the far end of the track and fired the puppy up.

Everywhere you looked there were hero drivers and hero cars. The “Greek’s” ride was sandwiched between Ivo’s Barnstormer and one of Garlits’ Swamp Rats and said shoot me (that means push the button on the camera, not the trigger of a 45)(JMC_4470). We did just for you.

Last up for today is another EPA hated machine paying homage to the Bakersfield track and the folks who made it all possible, the Smokers Car Club (JMC_4471). Thank you! 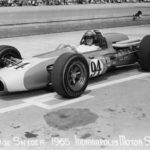 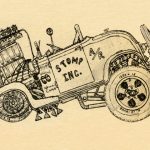 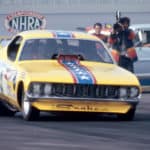 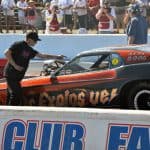 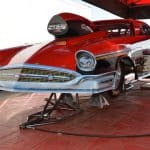 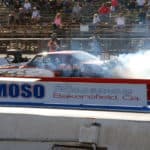 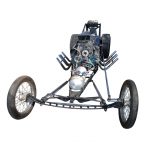 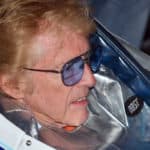 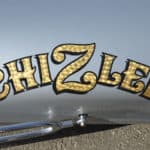 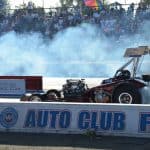 Previous Post: « Info From Out of Nowhere
Next Post: Old Newspapers To The Rescue »
↑ Top of Page