Around here we normally play it a little loose on the places we have to be as we never know what can’t miss event we find out about with just enough time to get there pops up. Then again sometimes we’re lucky enough to have a little lead time to get our ducks in a row before going on another fantastic adventure.

A good example is the week that just passed. The early part of the week was devoted to posting a bunch more Photos Of The Day for you and doing a little proofreading on David Featherston’s upcoming book Bonneville, A Century Of Speed that will debut at the 2014 Grand National Roadster Show. I also had to be on an airplane early Wednesday morning to attend the Inaugural England Hot Rod Reunion.

In the past, the AHRF has been quietly building its reputation and archives on a low key basis but it was decided that we should be a little more “Out There” and picked the Reunion as a test for further event participation as it was close to our home office. We also had a little push from our friends at the Wally Parks NHRA Motorsports Museum in the guise of Larry Fisher, Executive Director, and Greg Sharp, Curator, and author who put on the show. We took the three books we’ve published so far, Hot Rod Roots, Portfolio 1- Boys and Their Toys and The Great American Hot Rod Explained plus our two DVD’s, Deuce and Slingshot to see what reaction we’d get. It probably helped that we had a good-sized tent for it became the place to be when the rains came and went and came again. All in all, we learned a lot, met some great people and even sold a bunch of merchandise.

When not under the tent, it was walk around time and take a zillion pictures to share with you. It was also a great education in seeing how the North East’s old and new Rods and Race Cars differed from what we’re used to seeing west of the Mississippi River. Let’s have a look at some.

Horace and Paul Reinford built and ran this beauty back in the late 1960s and called it the Moose Too (JMC_4361). It was powered by a 427″ Chevy and it best was 142.80 mph in 9.52 seconds. The recently restored car (by Horace and Paul who still own it) had been awarded “Best Engineered Car” at the Maple Grove Raceway Year End Banquet and the Philadelphia Civic Center Car Show way back in 1969. The car was also featured on the cover of the September 19, 1969 issue of Drag Times that was formerly called Eastern Drag News. I love the body setback.

Our second shot was a real surprise to us. While walking around we spied a ‘29 Ford roadster that looked like it was out of a Bonneville time warp. The yellow car had the tell-tale signs of mucho lower body rot. There was a wooden board in front of it that was loaded with S.C.T.A. timing tags from ‘67 into the ’80s to confirm our guess. The name on the tags was Don Sarmento. There were also two pictures glued on the board that showed the car in one of its former lives. We present one of them (JMC_4377). This pix shows Don in the car in San Louis Obispo, CA back in 1948. It also ran on the sands at  Pismo Beach the same year. Another pix shows the car and Don in 1946 with it sporting full fenders. This ride has quite a history, from the streets of California in the ’40s to a display in New Hampshire this weekend. This one is a survivor for sure thanks to Don Sarmento.

Old racecars are fascinating to look at up close and personal and our next shot (JMC_4385) shows you what we mean. We’re looking at a Ford rear end nestled in an old Scotty Fenn dragster chassis that makes you ask, what was the builder thinking? I know saving weight in a railjob is a major consideration but I think this solution is a little over the top. It looks cool but how long do you think the ring and pinion and axle bearings would live under flattie power without trying to take out the driver’s private parts?

JMC_4375 shows another display car and survivor from the Golden Era of Drag Racing. We see “Hellzapoppin” originally owned and built by Ron Abbott back in 1961. It features a Dragmaster Mark 2 Chassis fitted with a 301″ Chevy small block that ran on Alcohol back in the day. Behind the flywheel is a ’39 Ford tranny hooked to a ’40 rear end that were both out of trucks. Dig the whitewalled slicks. The car was originally yellow and ran at Dover before a big wheelie got the car upside-down and bent the chassis upon landing. It was straightened and then painted Candy Apple Red. The repairs are visible to this day.

What was so mind-blowing about the New England Dragway event was the number of really neat old rides (JMC_4371). In front, we see the cool looking AA Fuel Coupe of Louras & Preising out of Cleveland, Ohio based on an American Bantam body and fired by a Chrysler FirePower Hemi built by Engine Specialists out of Chicago. In the background, we see the ’64 Fuel Dragster of Barnes & Gladstone out of St. Johns, Michigan.

We’ve fast-forwarded a decade to have a look at the Class AA number 700 Funny Car of Art Whipple and Ed Wills called Whipple & Mr. Ed (JMC_4373). It ran back between 1970 and 1972 and was driven by such notables as Bob Rowe, Dave Beebe, Kelly Brown, Leroy Goldstein, and Mike Snively. It’s currently under the custodianship of Reggie Bernier out of Nottingham, New Hampshire. In the background is the Country Girl flopper, a real survivor. Originally built in 1974, it ran the ’76-’77 seasons as a Gas car before switching to fuel for the ’78-’79 season. It was then sold and run as a Class B Blown Fuel Coupe and then rebodied as a roadster and ran a small block. The body and chassis went to separate locations in two different towns in the state of Maine and had to waite 25 years before they were re-united. We have John Knox and Chris Skirkey to thank for this. The body is a ’76 Plymouth Duster on a 118″ chassis and powered by a 426 Chrysler Hemi. Could I say we flipped over them.

There are so many neat rides we want to share with you but don’t have space to in the News, so our  option is a couple of combo images to get you salivating more. First up (JMC_4400) shows a variety of toys that were on hand. Top left is a vintage flat powered rail of the short wheelbase kind. Below it is jack Webster’s not so slow Slo-poke that loves to do wheelies. Then there’s Rob Young’s flamed Altered Ego T. It was hot! In the center is the original “Christmas Tree” used at New England Dragway. On the right top is the Waltons (not the TV show but Bobby and Shirley’s) Ford powered Fiberfab bodied sports car from ‘69. Below it for the Carpetbaggers is a wildly painted ‘55 Chevy Nomad. It does wheelies too. Last up is an MG TD with a 327 Chevy shoehorned in. It looks nasty sitting still and sounded great burning rubber.

Our next combo (JMC_4401) shows more East Coast eye-turners. Top left is a nice chop-top Model A  driven by an Alterboy. It features a Nailhead for go and a ‘37 truck-shell for style. Below it is Ron and Vicki Ernsbenger’s 1938 Willys Pickup with a wild looking engine lurking within. They came all the way from Napolean, Ohio. Bottom left is a duded up Model A with Chevy power and wide whites. Lady Luck, behind, approves. Top center is the nose of a neat rear-engined digger. Below it we see the tail of a wildly flamed ‘34. The strip work is over the top and well executed. On the bottom is a spectator’s radically customized ‘49 Shoebox that wore shapely skirts on its hips. Top right is another chopped A that featured banger power. The red Willys under it is just starting a burnout and is under no pressure, yet. Our last victim is a clean pick-em-up truck with a smoothie look. The nose and light pods look like they were bagged from a ‘37 Buick. Thanks Harley Earl.

Between heavy rain and sprinkles on Thursday and Friday and mostly clear skies on Saturday bunches of cars even made trips down the track at great rates of speed to wow the audience. Some of them were old Funny Floppers that brought back many memories. JMC_4393 shows Bruce Larson’s old USA-1 Camero doing a burnout before wowing the crowd with a quick run. We love the smell of burning rubber in the morning.

Last up is a little something we snagged in the swap meet area (J area (JMC_4354). Amongst the 20 something little pages, we lucked out and found some Volume One, Number Ones that are in great shape. A quick look through some of the Eastern produced mags revealed pics and stories of cars that will help us ID some of our A.B. Shuman slides. We call that a win-win for everybody. 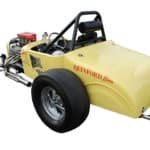 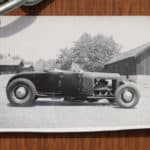 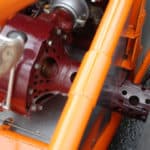 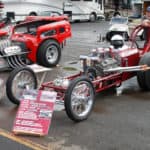 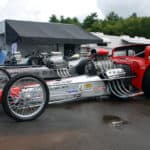 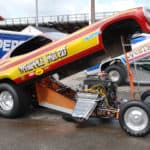 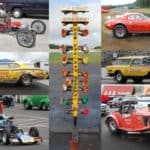 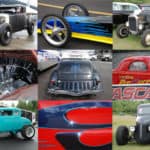 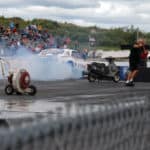 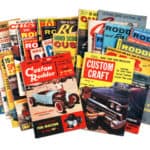 Previous Post: « Beware of Bookie Joints and Hot Models
Next Post: From a Flop Top to Short Shorts, Yea Baby! »
↑ Top of Page