In the past and the last installments of the news, we’ve mentioned about roadster’s as race cars and how the roots of hot rod style were developed before World War II on the streets an at the dry lakes of sunny So-Cal. We can take that a little farther and say a more sophisticated evolved after the war thanks to a bunch of X-GI’s and defense workers with newfound skills and the resumption of the Indy 500 in 1946. All one has to do to see this new style is look no further than our first two shots for this weeks story.

First up we see Dolphins Club member Les Callahan’s wild ride that ran at the lakes in September and October ’49 (GGC_116). His ’22 Dodge bodied roadster sported a Kurtis Indy car nose and a George Barris paint job. It was powered by a 248″ ’46 Merc with Edelbrock heads and his own intake manifold stuffed in a Deuce chassis. He ran 117.95 mph in Sept. for a 13th in class. Les and George entered the first Oakland Roadster show with the car.

We can follow  Les and George’s ride with the one of William A. NeiKamp (LOL_048). The Road Runners member ran his little street roadster at El Mirage in 1950. Power was supplied by a 248″ Ford flattie vintage 1942. The car ran in Class B Modified Roadster. In June it ran 124.64 mph for 12th in class. Bill also entered the first Oakland Show in ‘50 and came home the winner.

We should also mention that besides the Kurtis style noses an Indy car fabricator by the name of Art Ingles was churning out a cast grill shell insert and stylish noses for the likes of Dick Kraft, Yam Oka, Wes Cooper, the Spalding Brothers, and Barney Navarro to name a few.

Last week we showed you Dick Flint’s ride that pushed the envelope even farther in the roadster streamlining nose department. Let’s look at straight on shot Dick’s car from the same group of shots  (DCC_666). One has to admit that this car looks like it could have run at the 500. The best word that I can find at the moment to describe it is “Bitchen”. Last Monday I shot an e-mail of the car to Steve Memishian, the Foundation’s founder and guiding light, to show him how special the car looked without headlights and he came back with it sure looks a lot like Goodguys founder Gary Meadors’ jaw-dropper. We just happened to have a shot of Gary’s car that was snapped up at Steve Moal’s place a while back so here it is for comparison (JMC_4749). All we have to do now is talk Gary into losing the lights and shield, adding a tarpaulin and somehow get both cars up at Bonneville for an end-all photoshoot. We could call it “Double Bitchen”.

To change the subject for a moment the latest issue of Speed & Chrome is now out and our founder, Steve, has plied his literary talents into a six-page story about how the AHRF came to be. We even supplied some pictures to go with his words (JMC_4748). Check it out if you can find a copy.

To get back to noses for a bit lets look at a ride that had a lot to do with being the benchmark for swoopy pinched noses (PCC_178). Were looking at George Robson’s Thorne Engineeringngg Special backing into pit lane during a practice session at Indy in 1946. George qualified the car in 15th spot and drove through the pack to win the race. If we turn the clock back to 1938 that’s when this car and its’ twin made their Indy debut. Jimmy Snider and Ronney Householder were the drivers of the cars that they called “Little 6’s” due to their 179” inline 6-banger powerplants. The cars were conceived by Art Sparks and the chassis’ were built by Clyde Adams.

Continuing the nose game we showed you the snout of the Novi in Wendover last week. Its counterpart was the beautiful and trendsetting front-drive Blue Crown Spark Plug Specials  (LSC_052). We see Bill Holland in this Firestone PR shot. So successful were these Emil Diedt built cars that they were first Mauri Rose) and second (Bill Holland) in ‘47 and ‘48 and first (Holland) and third (George Connor) in ‘49. Note the spikes at top and bottom and on the sides of the grill that were used as mounting tabs, thank you, Emil, for this innovative design that carries on till this day.

Next up is something special that came from author-illustrator Joe Henning’s drawing board and demented mind (JHC_070). Take the engine out of Frank Lockhart’s crashed beach car, the Stutz Blackhawk and put it in an Indy car? That’s what Gordon Schroeder did for Aldon Sampson at Indy in ’39. With driver Bob Swanson they qualified 22nd and finished 31st. In ’40 they came back and finished sixth in the 500. in ’41 with Deacon Litz, they finished in 22nd spot. For ’46 with Spike Jones sponsorship and Sam Hanks up they finished 31st. So now it’s a make-believe 1947 when Joe Henning suggests to Gordon he should build a car for Bonneville. Why not set some endurance records in a roadster powered by the old Lockhart engine. We see Gordon warming up the Spike Jones sponsored car at the salt before his runs. Oh wait, this is all a dream! In reality, this would make for one really great retro ride and a worthy AMBR contender. Any wackos out there ready for a challenge?

To drift back to a little reality lets head for Harper Dry Lake on July 7, 1946, and see what’s doing at the third S.C.T.A. lakes meet that year (ARI_040). We’re looking at Gear Grinders club member Wilbur Burbeck’s Streamliner. Naturally, there is no engine make or speed listed. It was also the first and only time we can find that Mr. Burbeck appeared at the lakes. A close look at the shot reveals that the car looks like it was set up as a two-man car and is running a license plate. We count three exhaust pipes. The only thing we can figure is that it might be an Olds three-port head on a Chevy block. Anyone have any ideas?

ARI_028 is an important shot history-wise as it shows the inner workings of the first rear-engined roadster to ever run at the dry lakes. It was put together by Eddie “Bud” Meyer Jr. before WWII. In 1946 when this shot was taken Chauncy Crist of the Lancers was the owner. In April he ran 118.57 mph and in June he ran 117.34 mph. By July he was a no-show and gone. Note the lack of transmission and crude workmanship. In ’47 fellow Lancers, Jim Palm was the car’s new caretaker and made more than a few changes. We have him running 121.78 mph for a fourth in class on July 6  so his changes worked.

One look at our next shot says this is one cool Deuce. It also presents us with yet another mystery that needs solving (ARI_360). That’s a Cad V8 Flat motor taking the place of one of Henry’s hunk of iron. Check out that DuVaul windshield too and the really wide whites on the rear, Nice. Here’s what we’ve figured out so far. The plate on the ‘40 in the upper left has a tag on it so that puts this shot in the ‘48-’50 years. We also zoomed in on the roadster blocked by the DuVall and found the number to be 485. The only problem is there is no class B car that ran that number during those years. Our only option left at this time is it might be at a Russetta meet but finding results is a bear. I guess that’s why we never get any sleep.

Our next image is also a stumper and dates from September 1931(DBC_1078). It was identified as taken at Santa Maria, California as was the car sitting on pole. It’s none other than Lee Chapel’s  Chevy 4 powered car. Looks like the car is sporting a Model A front axle with modified springs. That’s Lee in the white coveralls with his left foot on the front tire. Earl Brentlinger standing behind the rear wheel with his back to the camera was the driver. The Model A’s in this lineup seems to have door handles so that makes them ‘29’s. Since this is a ‘31 shot the cars were almost new at the time.

Last up for today are a couple of image composites showing just a few of the books we plow through all the time in search of answers to our self imposed questions (JMC_4746 and JMC_4747). The worst thing about doing the scan job on these was that you automatically start flipping through them and then poof, there goes an hour or more each because something inside you says you gotta read all of it.

I’ve got a few more to read yet, so later! 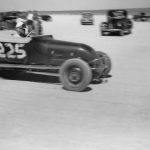 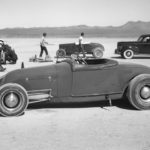 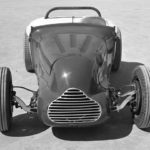 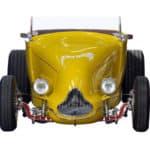 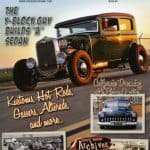 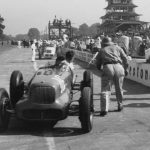 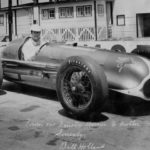 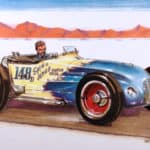 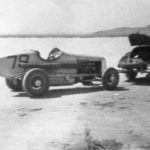 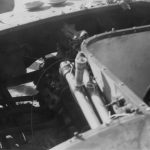 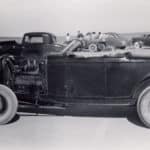 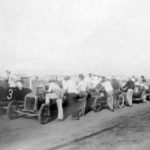 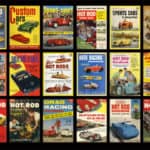 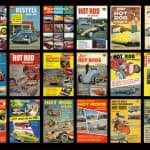 Previous Post: « Lots of Old with a little New
Next Post: The Good, the Bad and more Proboscises »
↑ Top of Page