We like to think that hot rods are really race cars in disguise. Since it’s not too practical to drive a racer on the streets the next best thing is to make your streetser look like a racecar and drive the #&@% out of it. That’s exactly what happened to our first vehicle for this week (DCC_667). Dick Flint, the owner of this fine-looking ride, was working at Alex Xydias’ So-Cal Speed Shop. When you worked at a speed shop like Alex’s it was almost a prerequisite that your ride had to be something special. Just master craftsmen were plying their trade in their body shop called Valley Custom. They had turned Alex’s lakester into a streamliner so Dick thought why not have them work a little magic on my roadster. The rest of the story, as they say, is history.  The front end of Dick’s car is perfect, especially without headlights, and looks fast just standing still. We see the car at El Mirage in 1951 with a light coat of dust after it was unloaded from its U-haul trailer. The shot is from our Don Cox Collection and was scanned directly from a negative, hence the great quality. As far as we know this is the first time it’s ever been reproduced.

Our next shot is also from the Cox Collection (DCC_146). Were looking at a what started life as a 1941 Chevrolet special Deluxe Cabriolet Coupe of which 15,296 were made. It’s undergone just a little work consisting of a chop top and the removal of Harley Earl’s overabundance of trim and the addition of much sought after today ‘37 De Soto bumpers and flipper hubcaps. Sorry, it’s a little out of focus, it’s from about half of a 35mm slide.

Since we live a little in the past around here, old race fans will remember that the month of May use to be really special as all died in the wool racers would take off for Indianapolis for a one month vacation. Our next shot was from one of those trips and was taken in 1951 (JMC_4694). The scan was made from a 2” x 3” negative that I believe is of ANSCO manufacture. Yes, it’s delaminated after having gone through over half a century-plus of heat cycles. It’s a keeper though because of the special subject matter. Car number 88 was the Joel Thorne entry that year. That’s no big deal in itself except that the car started life as something extra special. It was an all-conquering pre-WWII Mercedes-Benz W154 Grand Prix car that Joel somehow got out of Europe to enter in the ‘47 race. After Duke Nalon was a DNF in ‘47 and Chet Miller ditto in ‘48 the car was bastardized for ‘49 when an Art Sparks 6-banger was installed. It was a DNQ. In ‘50 it was the same deal which brings us to this ‘51 shot and another DNQ. Now we get to why this shot is actually important and it’s because of who’s standing next to the car. The Gentleman is Paul Grosso but everybody called him Punky. He hot-rodded everything from lakes cars to sports cars to aircraft but his most significant contribution beside being an all-around nice guy was when spearheaded the reforming of the Western Racing Association for vintage oval track cars in the early ’80s. Enough said.

Our next image was taken in a desolate-looking downtown Wendover back in August 1947 when the fabulous Novi’s took on the Salt Flats (JMC_4700). After Cliff Bergere qualified in second place for the 500 and dropped out with a burnt piston for a 21st place finish builder Bud Winfield took the Novi home and rebuilt it. A streamlined canopy was added and off to Bonneville the car went. Ab Jenkins was slated to drive the car but wasn’t comfortable in it so his son Marvin jumped in and set a Class D Record at 179.434 mph at the Mobile sponsored runs.

We were doing a little research and ran across this image that was taken at Southern Speedway in Los Angeles on June 7, 1936 (JMC_4709). The cars in the shot are called Roadsters and two of the three in this shot also did double duty on the Muroc lake bed. On the left, we see Pat Notary in a T-bodied ride that sported the first grill-shell that Frank Kurtis ever made for a race car. In the center we see Vince Podurgiel Cragar headed Ford-4 banger powered Chevy fours. He also was a big-time supplier of Spindizzies and our pal Lou Senter worked for him at that time.

To keep you on your toes with something that’s only thirty-four years young we just found this pristine copy of a Pete & Jake’s catalog from 1980 (JMC_4685). It’s packed with great stuff and features the best illustrations from then new kid on the block Thom Taylor whose now gainfully employed as a staff editor at Hot Rod Magazine.

We got out of the house this weekend and took a drive down to Orange County. The reason was our pal Leslie Long was putting on another Santa Ana Drag Strip Reunion Picnic. As usual rodding legends were everywhere. We couldn’t resist taking this one (JMC_4705) showing Isky and Art Chrisman trying to figure out who was in the pix there looking at. On the right is Jimmy Murphy (not that one) another early Santa Ana dragger who also worked for Louie Senter at Ansen Automotive back in the Golden Age of hot rodding.

Phil Turgasen brought his slightly used Pith Helmet to thred ride featuring a narrowed ‘27 body with Shorty Ellison behind the wheel. On the right is Woody Wilburn in a Whippet radiatored and grilled T-bodied ride. Another fellow that started with these kinds of track jobs migrated to the lakes soon afterward, his name was Ralph Schenck.

Our next shot courtesy of Pat Campea shows the Pat Notary ride that Campea-Oka had campaigned at the lakes in ’38 and is seen during the 1939 lakes season with new owner and driver Gardner Harris. It’s seen here at Rosamond on July 23. A Ford flathead with hi-altitude heads propelled the car to speeds of 94.73 mph and 113.90 mph. The last being good enough for fourth in class. Behind is the Deuce of John Blackwood who ran the stock V8 to 102 mph.

We’re always on the lookout for speed parts and our next image from May 15, 1936, shows an advertisement for an Alexander OHV conversion for a 21 stud Ford Flathead (JMC_4703). Eat your heart out Ardun fans. Alexander also made aluminum heads for Ford bangers as well as hop up parts fo foe April 26, 2014, Santa Ana Drag Race Reunion picnic for all to see. He was nice enough to let us take some snaps of it. This close-up of an Isky decal is a little worse for wear but is priceless. Thanks, Phil.

This morning it was up and at-em again with a little ride out to Irwindale Speedway to have a look around. The 39th edition of “Bug-In” was in full swing. It’s been years (the early ‘70’s) since we have even thought about the next best car after a Model T. There were literally hundreds of them in every size and shape imaginable and all of them were cooooooool. Let’s look at a couple of Bugs.

First up is Driver Ron Flemming’s ride getting a little out of inspection (JMC_4708). One-piece noses, flushed windows, slammed into the weeds and turbos are the hot setup these days for the VW’s. The orange one in the background carries EMPI “Inch Pincher” markings for those of you who remember.

Last up for today is a side view of the “Bug” shoed by Mark Prothero (JMC_4707). These puppies sport state of the art everything and are over the top in the wild paint and decal department. It weird watching these critters do smokin’ burnouts in staging and then pull wheelstands off the line. It a long way from 36 hp and Ferdinand Porsche for sure. 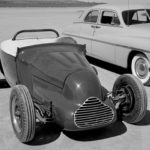 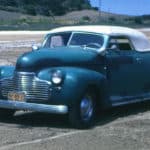 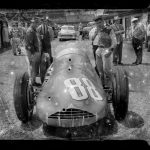 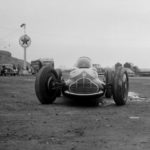 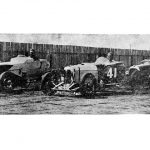 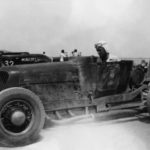 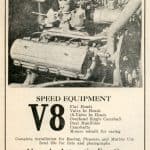 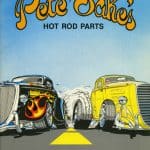 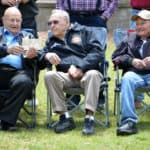 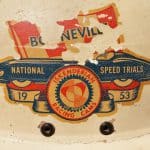 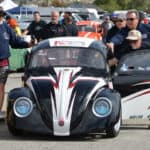 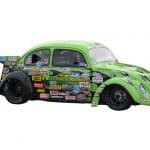