We’ve just finished off four rolls of 35 mm color negatives and a bunch of 2 1/4” x 3 1/4” black and white negs ranging from 1966 to 1970 and taken at the Grand National Roadster show when it was held in Oakland. There all courtesy of Doug Rasmussen who’s from Omaha but was an Air Force man stationed in the bay area back in the day.

Our next victim is Reynard Moody from Walnut Creek, California who entered this 1963 Corvette in the 1966 Grand National Show (DRC_195). It features an extended nose and tons of subtile body mods. Inside is a black tuck and roll job with matching headrests. Outside features different shades of blues in Candy and Pearl.

I think a lot of the cars displayed at this time weren’t very good looking so I had to dig out an oldie but goodie to show you what floats my boat. Featured on the August 1951 cover of Motorsport we see Miami, Florida resident C. C. Alexander’s customized 1950 Ford (JMC_5080). The car took seven months to construct and the front of the body tilts forward to reveal a 1950 Mercury V8 fitted with Edelbrock go fast parts. 32″ high at the cowl, it features a plexiglass windshield and snapped on Daytona Beach during Speedweeks in February ‘51.

This cover of HOTROD PARTS dates from August ‘64 and was shot shortly before Dave McDonald left for Indy that year and perished in one of the nastiest accidents ever at the Speedway (JMC_5079). On the left is A. P. Buesch of Sears Automotive (the car’s sponsor) and owner/builder Mickey Thompson on the right. Inside the issue is packed with cool stuff and gives complete results from the U.D.R.A. Spring Drag Championship. There is also a story on Ted Halibrand’s Shrike and our bud Lou Senter.

We couldn’t resist pulling out a shot of Lou back in the day behind the wheel of his Ford push truck at the Orange Show in San Bernadino (LSS_124).

Our next shot shows that all track roadsters are not created equal (LSS_112). Louis Senter’s beautiful street T is powered by a 159” Offy that powered Jim Hurtubise’s Mallard at Indianapolis in 1969. The Mallard was the last front-engined Roadster to try to qualify for the 500 and Lou helped sponsor it. The car is enshrined at the Justice Brothers Museum these days and is definitely worth a look.

We have great friends hiding everywhere and they continue to foreword goodies to us all the time. Take for example a little package we received yesterday of photographs taken at Bonneville back in 1953 by John Peschek. He and two of his buddies from the Torques Car Club of Tacoma journeyed to the flats to check it out and 60 plus years later we get to see the results. We present four shots from the trip.

First up is the Guy Mabee Drilling Special out of Midland Texas (PCK_001). Driver Joe Mabee had the distinction of being the first driver to shoe a sports car (this one) over the magical 200 mph mark at the salt. After qualifying at a speed of 194.07 mph that was good for a first in class Joe gained entry into the famous Bonneville 200 MPH Club with a two way average of 203.10 mph in the car.

Denny Larsen built the chassis and Ray Brown built the Chrysler under the missing hood. What’s even cooler is we met the car’s present-day owners, James, and LeaAnn Robinson, at the Bowling Green Hot Rod Reunion this summer.

Next up we see Ak Miller’s Class D Modified Roadster from Whitiedweeer, California at Speedweek in ’53 with its brand new paint job (PCK_002). Out back was a 1950 320″ Oldsmobile powerplant fed by four carbs. Ak was after the record of 170.04 mph set by the team of Stecker & Fugatt in ’52 and managed to qualify first in class with a run of 174.08 mph. His only problem was he couldn’t do two more laps so went home empty-handed. Behind to the right is Dr. Nathan Ostich’s ’48 Cad powered by a 348″ V8. He ran 131.77 mph for fifth in class (anyone remember his Flying Caduceus jet car?). On the left in the background is Tommy Thompson’s brand new Class C Streamliner that was powered by a 270″ ’49 Olds. Tommy ran 142.40 mph for a third in class (these days the car lives about three miles from here in Tom McIntire’s garage).

Spectator and Photographer John Peschek captured Glen Overmyer’s ’53 Studebaker Starliner in the pits at Bonneville in 1953 (PCK_003). The Long Beach resident replaced the Stude motor with a 368″ Cad to make an assault on the Class D record. Glen managed to get timed at a speed of 138.88 mph that was good enough for a second in class.

There is nothing like a multiple exposure to make your day in trying to figure out the rides in this shot. We can see the number 577. This is the Class B Competition Coupe of Nickell’s Automotive out of Newberg, Oregon that was powered by a 237″ Ford inline 6. There is no name or number match in the results so the car probably never ran. We also see the 573-C number that was taped on the side of Alban Bau’s Roadster from North Judson. Indiana. The program lists the engine as a 286″ ’48 Merc and we see Ardun heads in the shot. We have Alban running 139.31 mph in Class C Roadster for a 10th in class. We also see some other stuff happening in the shot that might say this is a triple exposure. Yikes!

We’re going to rate John’s road trip as A+.

We can’t forget Scott Phy for lending his dad Bill’s cool shots that we’ve scanned and been retouching. First up we find Bill Phy’s V-8 60 powered Streamliner entered in two  Russetta meets in 1948 wearing the number 337 (BPC_090). We have no speeds for either the June or July events, but who cares, the car is to die for.

Last up for today is a car Bill shot that everyone forgets because it never did anything that we can determine. We see Jim Brubaker’s Maserati number 14 as snapped in its garage in Gasoline Alley in 1948 (BPC_025). Jim was also the entrant and the car ended up being to slow to make the field. In ’47 the car ran as number 96 and was sponsored by Jack Maurer and didn’t make the field. In ’46 as car number 68, it was also a too slow to start. We think it might be one of four Tipo V8R1’s that the factory built in 1935. 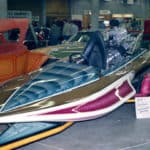 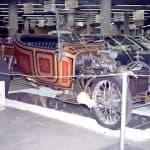 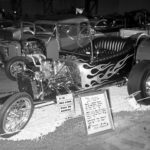 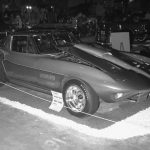 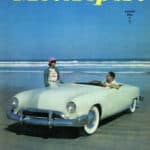 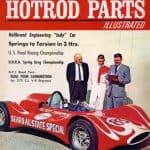 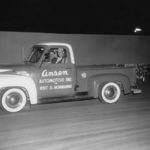 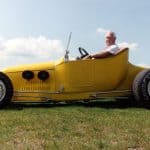 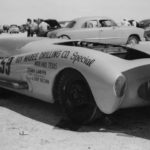 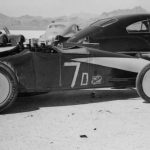 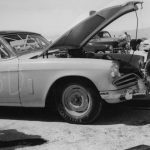 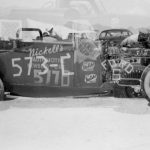 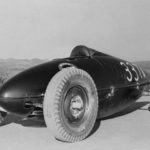 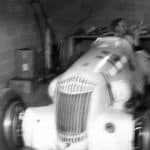