This year is the first time I’ve gone to Bonneville as a spectator since 1995. All the years in between then and now have been as a worker, inspecting cars and doing impound, etc. When you work an event that doesn’t leave much time to cruise around, collect dirt and take pictures so it was time for some goofing off. As luck would have it the 2014 event was a washout.

After a 10 hour drive from L.A., I pulled into Wendover about four P.M. and checked into the Motel. Since things were on hold due to rain from the day before and Wendover is such a small joint with nothing much to do except gamble and drink, it was time for a walk. The Stateline Hotel and Casino was only 200 yards down the road so off I went.

In front of the Casino Photographer, Peter Vincent was unloading his latest “Find” as we walked up. After the unload it was time to take a shot (JMC_5066). Peter was thinking about converting it to Bonneville use. Our opinion is NO, it’s been butchered enough already!

An hour or so later and a few feet up the parking lot our next shot was snapped (JMC_5067). Dice hanging from the rear view mirror was “In” in the late ’50s along with shrunken heads and female undergarments. Pinstriped dashboards ruled the day and it seems that nothing has changed till this day as seen with this ’40 Ford. The only thing missing on this ride was a “Bongo” on the rear seat or window shelf and a Mooneyes decal on the side window.

This year cars weren’t the only rides displayed in the parking lot in front of the State Line. We see Terry Craik’s 1350 cc Class A-PG Harley-Davidson powers on a powered bike that is called “Pistol Whip” (JMC_5076). The 2014 Speedweek entry was gunning for Larry Cason’s 2012 record of 169.975 mph.

This neat looking Track T streetster was snapped Friday morning (JMC_5068). Note the double spoked steering wheel. This detail was carried out throughout the car (steering arm, shifter, rear spring perches etc.) to give it a unified look. The trickest feature on the car was an aluminum casting bolted to the front of the block that acted as a motor mount and receptor for a modern Chevy water pump.

While cruising around the parking lot I ran into Peter “Pedro” Hendrickson from Bozeman, Montana. He gave us one of his new stickers for his Fast Four Special, a ’28 Dodge roadster that always has the V4F (Vintage Four Flathead) Ford guys up in arms because it goes so fast (JMC_5078). It’s powered by a 215″ ‘28 Dodge banger that came with five main bearings instead of Ford’s three for starters and has records in Blown Fuel Modified Roadster, Fuel Roadster, Gas Roadster and Blown Street Roadster. The rules were specifically written for Fords so when someone thinks out of the box and goes to fast it shakes up the status quo guys. Along with the sticker came a tailgate party with steak, corn and wine that was to die for. Go Pedro!

Next up we see the Contrivance boy’s Class D Blown Gas Modified Roadster out of Texas that was snapped in the parking lot behind the Shell station where Nevada and Utah borders collide in Wendover (JMC_5077). Roe Yale drove this car to a class record of 285.182 mph in 2012. By the way, the car with Roe shoeing also holds the Gas Modified Roadster records in classes AA (284.268 mph) through E (231.918 mph). That mean’s it’s really fast and their “Aero” tricks really work. Note the wide tread (with rollers, not race tires), airfoils on the axles and sliders to keep air the from getting inside and soft body shapes. The Red “T “behind the car was to serve as its push vehicle.

Around the corner from the Roadster, we found Keith Copeland and his “Worlds Fastest Modified Stock Car” (JMC_5069). The Class C Blown Fuel Modified Sports captured its Class record of 364.051 mph at Speedweek in October 2012 after starting life as a 1971 Triumph GT6. For powered, it uses a turbocharged 364″ Chevy V8 that drives the front wheels. Low oil pressure during a warm-up minutes earlier necessitated the oil filter check in progress. Inside the filter, there was no sign of FOD (Foreign Object Damage).

The Nish Motorsports Class AA Fuel Streamliner is caught waiting for word on   Bonneville Speedweek 2014 was a go or not (JMC_5071). Power for the slick looking ride is a 540″ Hemi V8 that’s gunning for Charlie Nearburg’s 392.503 mph record set in 2009. Jerry Darian who wrenches on John Force’s motors did the top end of the mill. Note the lower portion of the nose is all new this year and has been modified to direct air around instead of under the car. Former Indy Car driver Mike Nish pedals the car for his dad Terry and thinks the mod will prove the car’s stability at speed.

Fred Blanchard owns this super-sano Lakester that’s seen resting in its trailer before a called off 2014 Speedweek (JMC_5070). It sports a supercharged 437″ Arias Hemi-Chevy V8. Fred knows the engine inside out as he and Nick Arias have worked together and been buds for years. Rich Manchen originally built the car that features top fuel dragster front canards made into a rear wing. Yours truly helped Rich with the building and is a big fan of Fred’s efforts.

Looks are deceiving. At first glance, you would assume that this old Ford Pickup was Chrysler Hemi powered. A closer look reveals that it’s not really a Chrysler at all but a Buick (the front distributor, dipstick and header spacing are the giveaways) in disguise (JMC_5072). Covers were fabbed to hide the OEM valve covers and hold the Chrysler tin in place. The moral of this story is these days you really have to look closely to appreciate all the tricks the builders use.

All we can say is that this shot of nasty weather in Wendover this year reminds us of cruising around back in ’62 in my ’55 Pontiac and listening to tunes on our local AM radio station (KFWB in our case). We had to put up with Bobby Vinton warbling Rain Rain Go Away for 12 weeks on the Billboard Hot 100. Yuck! (JMC_5073). Originally an English Nursery Rhyme from the 17th century and tweaked by Gloria Baker and Noel Regney for Vinton, we think it’s high time to change the lyrics for a better situation— Rain, Rain go away, Come again some other day, Rain, rain go away, please bring Wendover (and August) some sunny days.

One of the downside to the flats being flooded was the absence of salt-encrusted rides at the Friday Night car show at the Stateline. Bummer! This ’34 Ford Fordor sedan Model 40-730 is as clean as it can get after a little rain storm passed through. For the record, Henry built 22,799 of them in Standard trim and 102,653 in Deluxe but none slammed like this with split wishbones and a ’37 Ford Truck grill shell.

You would think that Lake Bonneville might be the perfect place to hold a few Thunderboats races if you couldn’t race cars and bikes but alas the draw was to shallow (JMC_5075). Everyone had to settle for a no-go in 2014 as mother nature dumped too much water to soak in. Photographed Saturday morning at 9 AM, a half hour before the 66th Annual Speedweek event was Officially called off.

After another 10-hour drive returning from aborted speed trials, I was out of luck trying to do anything constructive at home as I had arranged for the old Casa to be tented to take care of some little pests that like to eat wood. I got to crash at my sister’s house for a couple of days and catch up on Turner Movie Classics. By Thursday it was back up and running time at home on the computer.

For the rest of the week, it was retouch and caption shots from the Bill Phy Collection like our next shot (BPC_056). We see Regg Schlemmer’s Eddie Hulse driven Class C Roadster at El Mirage on October 19, 1947. Hulse qualified the car first in class with a speed of 135.33 mph to beat Randy Shinn’s month old September record of 130.76 mph. On his down run, Chuck got on it hard and ran 136.57 mph. On his backup run, he turned 135.54 mph to establish a new class record of 136.05 mph putting Shinn’s record into the weeds. Under the hood of Regg’s machine lurked a ’47 Merc V8 with Navarro heads and Evans intake manifold fitted with two 97’s. A Smith bumpstick and two 4-cylinder Wico Mags completed the package that fed a 3.27-1 rear end gear. While doing caption research on the cover car for the first issue of Hot Rod Magazine we re-discovered Regg’s first land speed experience took place back in 1933 at a place called Muroc.

Late in the week, we got a call from Terry Larson who now owns the Joe Simpson ‘52 C-Type Jaguar that placed third in Class C Modified Sports Cars at Bonneville in 1957 with a speed of 155.97 mph. We passed on what info we could find and have a new car to be on the photo lookout for. Along the same lines was an e-mail that was another call from Tom Chambliss who saw one of our shots taken at Epping, New Hampshire last year of a “bitchen looking” altered wheelbase ‘55 Chevy (JMC_4355). Seem’s Tom was behind the car build back in ‘65 and sent us a pix of it as originally built. We also discovered in our chat that Tom was also a Bay Area Drag Racer so we passed on a shot of Mike Mitchell’s A Gas Willys from our Doug Rasmussen Collection (DRC_099) that Tom still remembers from ‘68. There must be something to this thing called networking after all.

For every shot, we can identify we also have bunches that were lost on. Here’s a shot from the ‘70 GNRS of a wild Vette we’re lost on (DRC_140). We’re guessing it might a ‘66-’67 by the basic shape of the front fender vents and no vents between the door and rear window. Anybody out there have a clue?

To close out an interesting week let’s look at an Official NHRA Drag Rules book from 1964 (JSC_082). Things were a lot simpler back then, totaling only 28 pages including finding the front and rear covers. Best of all the rulebook only cost fifty cents. A look inside revealed there was a new class called Factory Experimental (FX). Looks like the beginning of “the horse was out of the barn” as altered wheelbase and funny cars would soon follow. 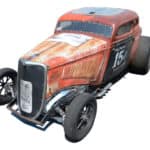 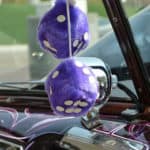 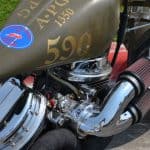 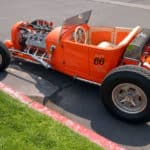 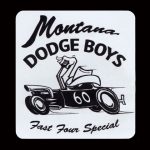 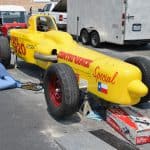 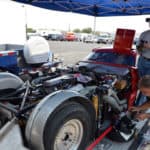 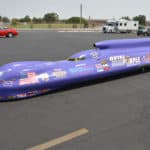 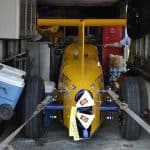 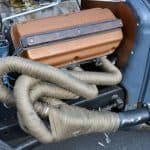 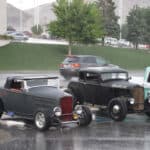 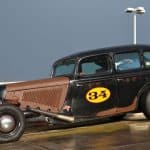 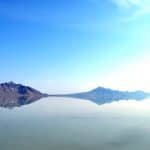 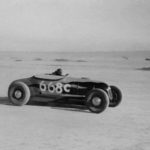 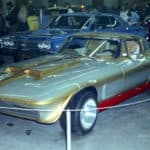 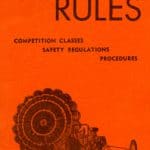 Previous Post: « Salt Fever
Next Post: It has been a fun week scanning and retouching and getting new stuff »
↑ Top of Page