Last week we received some old negatives from Geoffrey Skene out of Wyoming. We didn’t get a chance to touch them with all our running around so it’s only fair to show you one this week after we cleaned it up and played with the exposure some.

Waiting patiently in his Class C Modified Roadster is the “Dumb Kid” himself, Don Waite (GKS_002). FYI, Don got the nickname because he was south of 21 and smarter than the average bear. The starter waits for word from the tower before he lets our shoe hot foot it down the track at El Mirage in 1950. Our dilemma is we’re guessing it’s a cold May 6th meet because of the more sure. Don made three runs at this meet, 154 mph, 157 mph and 160.710 mph that was good enough for him to grab a first in class ahead of Paul Schiefer who ran 156.25 mph. Sitting behind the Sidewinders member was hotted up 296″ Merc. Since Don worked for Edelbrock guess what kind of go-fast parts he used?

We went overboard at the Drags last week and shot way too many pictures. It’s one thing editing out a few good shots but there is also the identifying of the cars and drivers. Between bringing home a program, National Dragster and checking the NHRA website we’ve got most of it figured out. Let’s look at a few shots.

While walking by the grandstands looking for a place to sit fellow Sidewinder Don Tubbs and a couple of his buds spotted me and invited me to join them. We were only a couple of rows back and had a perfect view of the track. After clicking off a few shots we got to witness some history in the making. John Force is captured Friday, February 7, 2014, on his way to setting a new National Speed Record of 324.12 mph and a new National Elapsed Time Record of 3.966 seconds (JMC_4979). WOW! You can call that good timing and also a lot of luck as panning a speeding race car is no easy task and getting it in focus and in the frame is even harder. On Sunday Force went on to defeat Matt Hagan (the guy in the previous picture) in the final round with a speed of 323.58 mph in 3.965 seconds. That makes it a Double WOW for the Winner!

Some of the coolest cars are never seen or known about at the Winternationals. While cruising the staging area Friday morning during first round eliminations we spotted this work of art (JMC_4949). Tod Barton from Norwalk, California ran his super sano 1955 Chevrolet in the Super Gas class. Under that scoop lurked a 540″ Chevy. Unfortunately, Tod was only one of 48 others that didn’t make it into the first 35 cut. Bummer!

During the week we finished up a bunch of spotting and retouching on Josh Mishler’s ‘54 and ‘55 shots taken in Kansas. Here are a couple for you.

MSL_016 shows us Joaquin Arnett’s “Bean Bandit III” flathead powered ride that was entered in the Dragster Class at the First NHRA Nationals held at Great Bend, Kansas in October 1955. The car was powered by a ’48 Merc and was one of the six finalists in the runoffs before the rains came and shut down the meet. Joaquin had beaten Art Chrisman’s famous ride that was powered by a Chrysler to get to the eliminations and now he had to start all over. To make matters worse, the runoffs were to be done at the Arizona State Championship Races on November 19th and 20th.

Sometimes taking other than race car pictures is also a great idea and Josh’s Grandfather had an eagle eye when he snapped this one (MSL_020). This primered and chop-topped ’40 Ford Standard was taken at Great Bend, Kansas in 1955 during the First Annual NHRA National Drags. At first, we thought it looked like Earl Bruce’s ’40 Deluxe that he chopped the same way right after he bought it new back in ’40 but no, this is a different ride and does it look cool. Wonder if it still exists?

We’re constantly on the lookout for things “different” and that’s what ended up on our desk this week.

JMC_4606 was done as a PR piece back in early 1966 for Ford Motor Company. We see a stylist’s take of the new Ford J-car that was to take on the World’s Best in international sportscar racing. The car was an updated version of the now-famous Ford GT40. It featured an all-new aluminum honeycomb chassis and was called the “J-car” because the design met Appendix J rules of the FIA’s International Sporting Code. I always liked this illustration from day one and wondered if the number 32 was paying homage to our favorite year roadster?

Our next shot shows the real thing, a prototype Ford J-car, that is seen on Test Day at Le Mans on April 3, 1966 (JMC_4608). The test drivers were Chris Amon and Bruce McLaren and were entered under the name of Shelby American, Inc. The real car had a few aero problems as tested so for the 24-hour race on June 11, Amon and McLaren would be driving the older but updated GT40 Mk II model and end up winning the race in a controversial for Ford, finish. After Le Mans Ken miles was killed while testing the J-car at Riverside so a complete redesign was undertaken culminating with the GT40 Mk IV. For ‘67 the new Mk IV would go on to win the 24 Hour Race in the hands of Dan Gurney and A.J. Foyt wearing the number 1 just like the prototype car did. Cool!

We also ran across this interesting shot (JMC_4600). Frank Burany goes on his head on the left in number 26 while Richards in number 10 slides by. On the right Remeevich in the number 25 and Muhike in the number 15 have problems of their own. We had no clue where Crown Point was so we did a little digging. Crown Point turned out to be Crown Point Fair Raceway just south of the city of Crown Point, Indiana (go figure). The town is about 10 miles due south of Gary, Indiana and about six miles east of the Illinois border. The 1/2 dirt fairground track actually ran around Fancher Lake (seen in the foreground). We are looking South West from the shooter’s location and beyond the trees is the intersection of West 121st Avenue and Lake Street. How’s that for doing research!

Another shot we just scanned is from Rodney Smith and shows Nelson Taylor’s car, number 191, at the lakes in 1941 (ROD_003). Jack of West 121st Avenue and Lake Street. How’s that for doing research!

Another shot we just scanned is from Rodney Smith and shows Nelson Taylor’s car, number 191, at the lakes in 1941 (ROD_003). Jack Mickelson is seen removing the windshield while the headlights and exhaust have already been stripped. In June the Gophers member’s car ran 114.00 mph, in July 106.89 mph and in September 115.23 mph. Note that ’39 Ford teardrop lights were already standard rodder fair on roadster tails and that recessed plates under glass were making their way from customs to rods. Looks like the doors were stuffed with newspapers too, another rodder’s trick. If you find an old ride that’s stuffed like this one, check the date on the papers. We’ve seen some dated before WWII.

To end this week check out our last odd-ball shot (DOT_964). Looks like it was taken in a ballpark and the Ford cop-car is of ‘49 vintage. At the top, we see an in-flight ‘36 Auburn Sedan about to take out what’s left of some semi-old Ford sheet metal. Ouch again. On the bottom, a hard-tail is about to make a hard landing. Somehow we just don’t think the landing ramp look to secure. Oh well, it’s Show Biz. 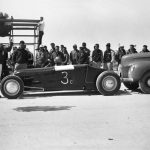 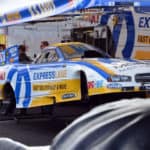 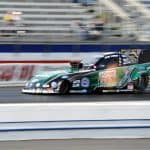 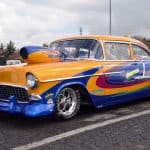 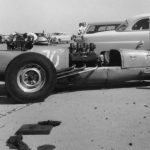 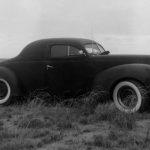 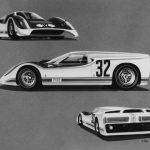 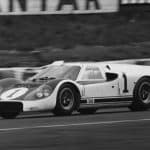 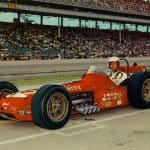 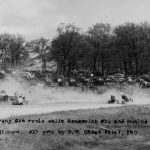 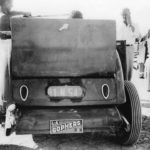 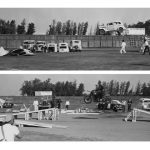 Previous Post: « Who Has Time to Sleep
Next Post: From a Wing-Tank to a Rocket-Deuce with a Capsule in Between »
↑ Top of Page