It’s been retouch and caption week around here. That also means pulling one’s hair out on trying to find documentation to help get things right, especially the old stuff. A case in point is the First NHRA National Drag Races held at Great Bend, Kansas back in 1955. We got “Official” HNRA documents from Bob Frey on car entries and numbers and when we started matching them with the pictures we got from Josh Mishler’s Grandfather, who took them, we came up with a lot of don’t match images. The best example is Jim Hopper’s dragster. It’s not in the entry lists but we have a picture of his going head to head with eventual winner Lloyd Scott in his “Bustle Bomb” that was published in the “Drag News” issue that covered the event. Oh well, we’ll keep looking.

For our first shot, today let’s go back to Great Bend and have a look at one interesting ride (MSL_036). We see future dragster builder “Extraordinary” Rod Stuckey’s wing-tank body chrome rims up front ride that he brought from Kansas City, Missouri. Looks like he’s sporting chrome rims up front and a 1952 Cad power-plant out back. Naturally, there is no info on how fast the car went.

Almost a year previous to the Great Bend run-off’s a group of guys set off from Los Angeles pulling a trailer behind their station wagon with everything in it needed to stage a drag race. This adventure was called the NHRA Safety Safari and it crisscrossed the United States. One of its stops was at Edna, Kansas to show the local populace how to stage and run a drag race. Our next shot (MSL_051) shows a picture of the fastest car at that race. It turned a speed of 127 mph and was also the scariest looking car there safety-wise according to a caption on the back of the shot by photographer and attendee Jim Golden. It looks like the chassis it ready to collapse just sitting there. Again we have no info on the car’s owner.

We showed you some shots from Pomona last week. A good couple of days was spent going through the “Official” NHRA results on their website to try and get the correct info for about 5 dozen shots including the next three that follow.

Antron Brown crashed last year in his Top Fuel Dragster fitted with the new “Safety Capsule”. While we were cruising the pits this year we spotted his team pulling out of their pit stall on the way to staging. We just had to get a shot of his new ride for this year fitted with the “Cell”. Here’s what we came up with for a caption on the shot (JMC_4962). The number 2 Matco Tools 2014 DSR chassied and TFX powered Top Fuel Dragster is heading out to staging before first-round qualifying action at the 2014 Winternationals. Drive Antron Brown did a good job with the car as he motored through the lights at 318.17 mph in 3.798 seconds for a fifth in round 1. For round two he upped his game and ran 326.00 mph in 3.731 seconds to slide into first spot. Antron let it all hang out in round three but smoked the tires at the 400-foot mark and clicked it for a coast through at 139.76 mph in 5.089 seconds. He was still in the number 1 position. For the last round of qualifying our man only ran 326.00 mph in 3.733lection.1 seconds and slipped to third spot. Come Sunday it was elimination time and his first-round matchup was against Clay Millican. Antron was first off the line with a .040 reaction time but smoked his tires again at the 300-foot mark and only managed to run 266.53 mph in 4.076 seconds. Clay went on to win with a 312.28 mph lap in 3.797 seconds. Adios Antron.

We were also rummaging through some of our collected goodies and thought we’d show you some of the odds and ends we haven’t got to yet (JMC_4627). Up front we have an original Ford V8 Car Reference Book from 1936. Inside, it lists the car’s new owner, one George DuVall Junior and is dated November 8, 1935. For you who have been living under your car for way to long, George is the designer of those funny windshields that turn up mounted on 1932 Ford Roadsters. There’s even a section in the booklet on how to remove a huuthe So-Cal Streamliner at El Mirage was the editor back then.

At the bottom of the pile is the Guildsman, or the publication of the Fisher Body Craftsman’s Guild. If you were a kid growing up and in the ’50s and ’60s and were into designing cars this was the bible. It was full of cool drawings and pictures of what cars would look like in the future (Today). This issue is from ‘62 and boy was the future predicted wrong.

When you look at JMC_4629 you’re actually looking at the top of a hat around 15” in diameter. It was worn as an advertisement over 60 years ago. We’ve only seen a couple in pictures at the early Motorama’s so we’re guessing there aren’t too many that survive today.

During the week the question was posed about what constitutes an A-V8. At first, that’s an easy one, it’s a Model A with a V8 flathead in it like Don Ferrara’s seen in DFC_179. This picture shows Don’s roadster at El Mirage on May 20, 1950, before taking a lap during a Russetta Timing Association meet. He was playing with the hot dogs who had their modern 24 studders and flaunted his use of an old 21 stud model. He turned a respectable 115.38 mph that day in his beauty.

Our pal John Athan use to go to wrecking yards in the late ‘30’s and chisel off the rivet heads on used up Deuce chassis to get a cross-member. He’d then install them in Mob cap, exciting, huh?

Underneath it is a poster for A.M.A. Sanctioned Motorcycle, S.C.T.A. Hot Rod Races and a C.A.P. Air Show that took place at the Santa Ana Blimp Base on Sunday, July 16. This, folks, turns out to be the inspiration for C. J. Hart starting up the Santa Ana Drag Strip and years before there was an NHRA. A guy named Wally Parks was behind the S.C.T.A. timed event.

Under the poster is Volume 1, Number 1 of Four-Banger from 1973 published by the Half Mile Dirt Track Racing Exhibition Association. This was at the beginning of the retro craze in old race cars. Lots of cool historical info is contained inside it.

It’s followed by Volume 2, Number three of Hop Up Magazine. A guy by the name of Dean Batchelor who had crashed as the editor back then.

AJC_047 shows how slick a ‘’28-’29 body looks resting on a set of Deuce rails looked as seen in this ‘47 shot. In ‘46 and ’47 this car was raced by the Barber Brothers at the lakes with a Merc flattie in it before Kenny Yenawine took it over in ’48 with the same Jerauld’s Racing Equipment painted on the side. It continued lakes racing and participated in a new-fangled sport soon to be called drag racing.

The question then arises, is this an A-V8 since it uses A parts along with Deuce parts? It also gets complicated as guys like Connie Weidel ran an A chassis with a T body that was powered by a Cad flattie V8. See what we’re getting at.

To take it to the next level where do we slide in our next shot (DKC_009)? The truncated Phaeton body isn’t of Ford vintage and neither is the chassis but there is probably a flat motor inside just behind the Deuce grill-shell. Ah, the joys of stirring the pot.

Then we get to a real non A-V8. Bet the Carlsbad Oiler-shell. Ah, the joys of stirrings member would get a little bent out of shape if his ride was associated with one of those older model Fords. To further stir the pot, the owner had visited a Military Surplus Yard a little south of him in San Diego and bought some bright orange paint that was used on rockets to help identify them in flight. Maybe we could call his car a Deuce Rocket, Na, but we bet the Cop’s loved this one.

We just had to throw in this non-roadster shot because the chief mechanic on it was a hot rodder himself. Before the war, he had equipped Danny Sakai’s Modified with a set of his own heads and intake manifold. His name was Mal Ord. JMC_4560 is a great overhead shot that shows the Rex Mays’ driven Bowes Seal Fast car at the first post-WWII race held at Indy in 1946. The car was built by Myron Stevens and was powered by a supercharged Bud Winfield built straight-8 displacing 180″. Mays qualified the car in 14th place and only lasted 26 laps before the intake manifold gave up. We can trace the car back to ce the car back to being new in 1938, the first year that riding mechanics were done away with for the second time. Lou Meyer qualified the car in 12th spot and finished in 16th going out with a broken oil pump. In ’39 Meyer drove it again and started the race in second spot and finished the race in 12th after crashing on lap 197 and immediately retiring as a driver. In ’40 with new driver Rex Mays the car started on the pole and came home second. In ’41 Mays drove it to a second place finish yet again. The car missed the ’47 race and resurfaced in ’48 when Bill Cantrell raced it in the 500 as the Fageol Twin Coach entry minus the 8 and now fitted with a Fageol inline 6. He tried it again in ’49 and was a DNQ. After that, we don’t see it again at the race.

Just had an idea, what if we got a Model A and put some Deuce rails under it and then installed the Winfield motor from May’s car. Could we call it an A-in-line 8? OK, don’t shoot me. 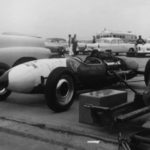 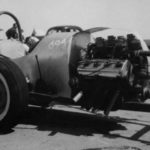 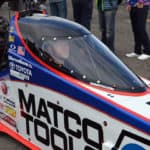 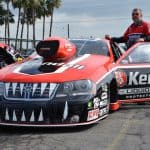 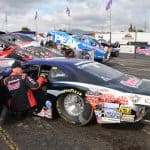 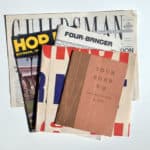 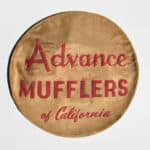 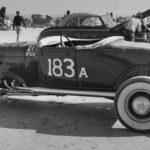 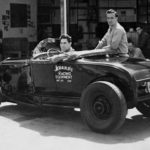 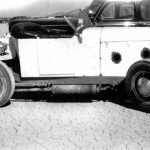 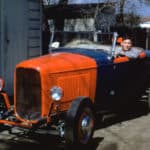 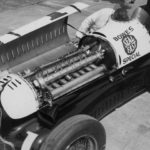