As you can guess we got a lot of shots at the Grand National Roadster Show last weekend. Well guess what you have to do when you take lots of shots, that’s right, go through every single one to see what came out ok. We did that for about a day before we jumped on a bunch of new goodies. Before we get into that let’s look at a couple of shots from the show.

Since we like old stuff lets have a look at A. R. “Tommy” Thompson’s early days Bonneville Streamliner that is now in the hands of Tom McIntire and is well cared for. Tommy initially showed up at Bonneville in ’53 with his Class C Streamliner powered by a 270″ ’49 Oldsmobile V8. The backyard builder took on two heavyweights that year and finished third with a speed of 142.40 mph. His rivals were the Shadoff Special at 231.66 mph in first place followed by Lee Chapel’s Tornado at 230.62 mph. Needless to say, Tommy was always one step behind but never gave up. Years later when the Summers Brothers decided to build their 4-engined land speed challenger and they asked Tommy if they could use the name. Naturally, he said yes. When he built the car Mr. Thompson was working for Adolf Coors in Golden, Colorado so it was only natural that he would name his rod after the city he lived in.

Behind and to the right of the yellow wonder is Chico Yamada’s Mooneyes Modified Roadster that has Fred Larson’s old streamliner engine setup in it. To it’s right is Terry Nish’s Streamliner body and chassis in all its glory. In front of it is the Ferguson’s Eddie Miller Bonneville Lakester from ’52. Car 54 behind it is Anthony Young’s gnarley Modified Roadster. The white car center rear is Seth Hammond’s beautiful lakester. Needless to say, the Century of Speed exhibit at the GNRS was fantastic.

On Friday at the show, I was talked into doing a little interview sitting in front of the Lockhart re-pop that was posted last week. While cruising through the archives this week we ran across an old newspaper clipping showing Lockhart after he won the 500 in his rookie year in 1926 (DWC_069). Would you believe he had a Coca-Cola bottle in his hand?

Since the car he drove at Indy was built about 10 miles from here that gives us a good excuse to show you what a state of the art car of the day looked like. Better yet let’s look at Lockhart and his team-mate and rival Peter DePaolo in living color thanks to our pal, Joe Henning (JHC_096). Ah to have experienced going to a board track race in the day.

These cars bristled with fantastic detailing and that lets the door open to show you that today’s hot rod art is right in step with the oldies. JMC_4942 shows my favorite detail on a car at the 2014 Grand National Roadster Show that just happened to be the brake drums on Bruce Leven’s 1929 5-window ‘29 coupe called “Ford Special”. They were machined out of billet aluminum and went perfectly with the Vintage Engineering Indy Mag Wheels. They also looked like they were off an old Miller. Who could ask for more?

Last week we mentioned we got some cool shots from Josh Mishler. Seems Josh’s grandfather was hooked on rods back in the day and took the shots and passed them on to his grandson who was kind enough to let us borrow them. After scanning half a hundred we can say they were more than cool, they are fantastic. Thank you Jim Golden and Grandson Josh.

You could say these photos are frosting on the cake as they were taken at the First Annual National Hot Rod Association Nationals that took place at Great Bend, Kansas between September 29 and October 2, 1955. When we get shots like this we like to do a little research on the event. It also helps us identify the players in the pictures. We’d like to thank Bob Frey, retired NHRA Announcer, and Jere Sheehan for supplying us with some documents of the day.

To set everything up let’s look at the advertisement that the NHRA ran in the August 1955 issue of Hot Rod Magazine for the event (JMC_4598).

Now for some pictures. Let’s start with the Ed Losinski Dragster (MSL_008). The car looks fast just standing still, and we found out why thanks to the August ’55 issue of Hot Rod, the slick body was designed by Rod Chappel of Herbert Beast and Breedlove Spirit of America fame. The car usually ran with a Harry Duncan Chrysler Hemi but we’re not sure in this shot since Ed has a new partners name painted on the side of the car. We’ll just have to ask him for details the next time we see him.

This shot is even cooler and shows Calvin Rice’s kick-butt car from Santa Ana, California entered the J. E. Riley & Sons sponsored dragster (MSL_007). It was powered by a 274″ 1948 Merc flattie and driven to a speed of 141.73 mph. Cal was in the final run-off for dragsters when the rains came to Great Bend on Saturday afternoon and forced the meet to shut down. Rice, the car and the six remaining contenders would face-off at the Arizona State Championship races at Phoenix in November. At the Arizona races, Cal won Mr. Eliminator for ’55 with a top speed of 141.95 mph and posted a low ET of 10.3 seconds.

We’re not finished with this shot yet. To your right of Rice’s ride is a lowered and shaved ’53 Olds sporting two-tone paint job that just happens to be towing that Losinski rail job. To its right and behind Rice’s office is a car they called the “Sacfireboid”. Starting with a ’48 Kurtis-Kraft Indy car chassis, and some prodding by Firestone for a quicker tire tester, the boys at the Strategic Air Command’s USAF Experimental Hobby Shop (Under the watchful eye of General Curtis LeMay himself) fitted a 1954 Boeing 202 Gas Turbine in the car. To keep this experiment a little under the radar, it was officially entered by Sargent John B. Davis of Offit AFB in Omaha, Nebraska. The June ’55 issue of Hot Rod has more details on it if you’re interested.

Next up is the Arizaga & Jobe ’34 Ford sedan (MSL_011). Under the hood of the Class B Fuel Coupe and Sedan was Merc flat motor of ’49 vintage fitted with Ardun heads. From the markings on the side, we bet it had Hilborn Injection and ran some of its sponsor, Speed-O-Motive, go-fast parts. We have it at a speed of 113.06 mph that was good enough for the boys from El Monte, CA to take home a class win and a set a National 1/4 mile Acceleration Record. Note the blocked off grill shell to either build some heat in the motor before a run or to ward off bugs on its cross country tow.

Another interesting ride that showed up in Great Bend was Bob Armstrong’s customized ’40 Mercury Convertible (MSL_026). He had come all the way from Alhambra, California to partake in a little racing. Under the hood was a potent ’48 Merc that enabled him to cop First in Class C Fuel Coupe and Sedan. His speed was 78.74 mph. Bod also established a National Record in the class with a speed of 90.54 mph. We guess the lead sled moniker doesn’t apply to Bob.

For the English Tea Baggers in the crowd, we present this custom-bodied 1953 Allard that is real head-turner (MSL_033). It was owned by Warren B. Turner out of Kansas City, Kansas. Under the hood was a ’53 Chrysler Hemi that propelled Mr. T to a speed of 104.89 mph to cop First in Class A Sports Cars. He also established a new National Record with that speed.

No drag race in the mid-west would be complete without the Arfons Brother’s and their Green Monster, this one being number 5 (MSL_006). We and some spectators in the background are looking at the 1,750-pound car’s powerplant nestled in a 136″ wheelbased monster located in the pit area. The brothers mounted their $50 find, a 770″ Ranger aircraft engine, upside down and backward then fed it through a Chrysler fluid drive unit into a ’40 Cad rear end. We have it as running 128.20 mph. With Art (Arfons) driving the Monster in the Open Gas Class finals against Californian Fritz Voight, he was slow off the line and Fritz came home the winner with a speed of 129.95 mph in his Chrysler powered rail.

All great shots these are. We have some more yet to scan that were taken at Edna, Kansas during the ‘54 Safety Safari tour in August ‘54 so stay tuned. 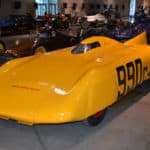 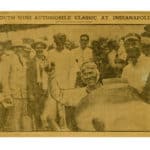 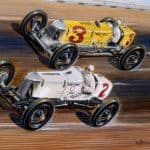 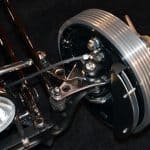 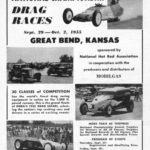 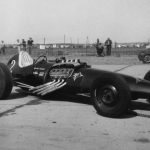 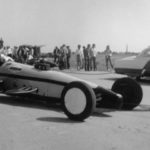 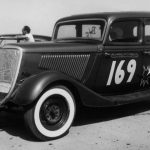 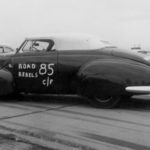 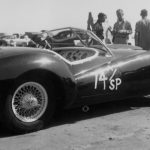 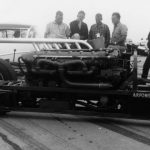