Old time rodders are the best. The stories never end. To that end my bud Julian Doty has to go to the top of the list. Every time we go somewhere I get another story from him and get to fill in more holes.

Last week Doty asked me if I would like to go to a birthday party with him. Seems his friend was turning 90 and he thought I might like to meet him. The friends name is Louie Kleinau. In passing Doty said he use to run at the lakes a long time ago. I didn’t recognize the name so the next day it was do a little digging to try and find him. That I did and found him listed in the May 28, 1939 S.C.T.A. program. Seems Louis was a member of one of the oldest car clubs known to exist called the Throttlers. Wow!. Some of the old programs list car types and such and Lou was listed as having a phaeton with a Windfield cam. No speed or any other details were given so all I had to do was hang on to party time to find out more. I scanned the page where he was listed and printed out some copies to give him. I also put together a binder full of shots from that year for him to look at.

We arrived a little early and that’s when the fun began. Lou looks and act’s like he’s maybe 70. After the formal introduction it was bench race city. I found out his phaeton was a ’34 model and that he went to the lakes earlier and helped some friends with their cars. He also went roundy-round racing later to. He still goes to El Mirage and track races up in Ventura too. These guys never stop. It must have something to do with the smell of caster-oil mixed with the fuel in the tank. Amazing. Needless to say all the guys there for the party were car nuts and the binder was center stage with look at the cool cars etc.

This AM I returned a photo album to another friend Monk Thormin. He’s only 81. You’ve probably seen some of his cool shots taken at the lakes in ’45. After I scan shots I usually do a one on one and try and find out if I have missed anything in my descriptions and usually come away with more tidbits of information. Like a lot of other hot rodders Monk dabbled in other forms of car racing like street and later sporty car racing. It so cool to see the eyes light up when he tells you about the time the cops raided an impromptu street race and to escape he drove over some railroad tracks and down into a farmers field to hide. The follow-up was even better in that he stayed there a couple of extra hours to make sure he wouldn’t get nabbed by the cops and that he didn’t have a jacked and froze his you know what off. Ah the life of a young hoodlum.

Earlier this week I talked to Kent Borgh. Seems his dad Carl bought the Spurgin-Giovavine roadster after they won the S.C.T.A. Season Championship with it back in the late ’40’s. Later he converted it to a rear engined drag car. It disappeared for decades and is now in the hands Ernie Nagamatsu for a restoration back to original form. Seems you talk to one guy then it leads to another and another and more history is saved. Carl also raced a beautifully crafted tank at the lakes and B-ville so even more is yet to be uncovered.

Don’t forget the Grand National Roadster Show is in a couple of weeks at Pomona and we will be there to shoot some pix for you.

Monk Thormin started with a ’27 T (MTH_061) and graduated to a Deuce (MTH_106). He then unloaded it on Jack McGrath. His other buddy Bud Hand soon warped Monk’s direction so he built up new toy powered by an Aerial motorcycle engine called a F-III (MTH_154). We see him in his homebuilt at Palm Springs on February 25, 1956 after finishing third. Monk drew up a new ride (MTH_188) with front wheel driver and soon had it on the races ( MTH_214). Then a new wife and baby boy forced him to grow up and put an end to his racing career.

Bob Giovanine’s son Curt just shared these shots with the foundation. First up is GIO_061 showing “Bailin wire” Chuck Spurgin on the left and Curt’s dad Bob Giovanine on the right. They had just added a belly pan after lowering the body, had whacked the Whippet grill-shell down to size and put a Ford axle and spring up front under some new tin replacing the Chrysler one that hung on the original Chevy springs. It’s April ’48 just before they set a new record at 113.95. GIO_081 shows “heavyweight” Bob Rufi on the left with fellow Albata members Giovanine in the middle and Bailin Wire on the right. The nose had just been formed by Chuck and lacked a little paint. GIO_101 shows the car now painted blue sporting a no. 1 sfter grabbing their S.C.T.A. Season Championship. The shot was taken at Spurgin’s rental house in Malibu. Last up is this rare shot of the car after it was sold to Borgh and run it as the Mothersills Special. 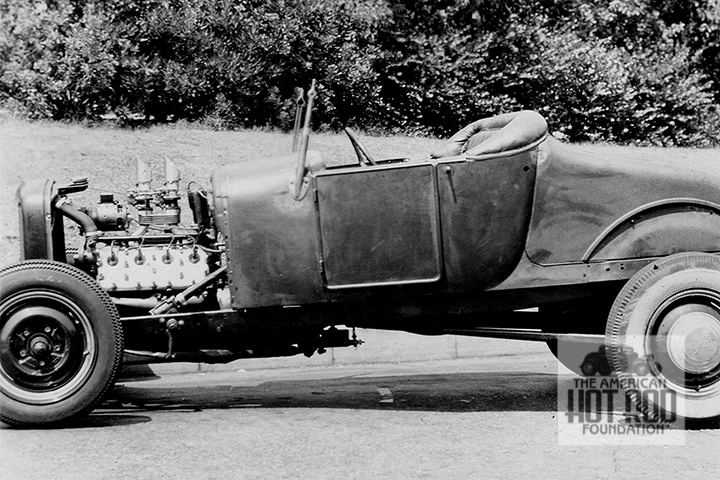 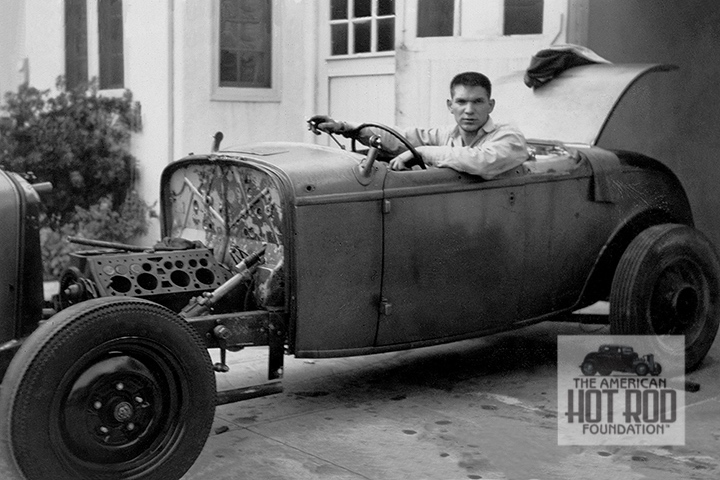 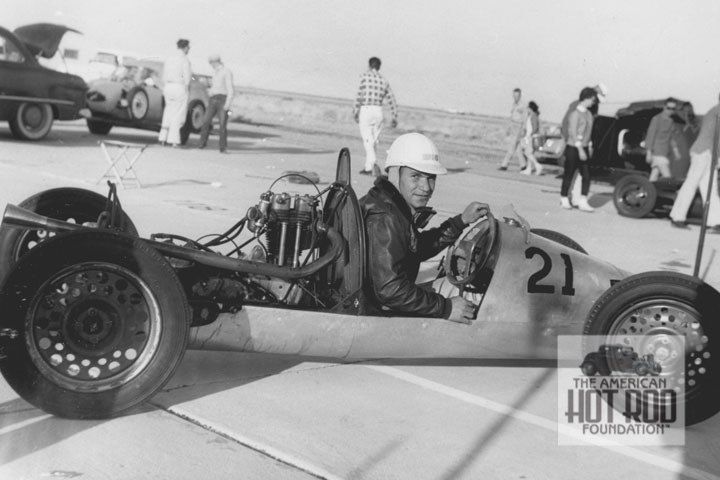 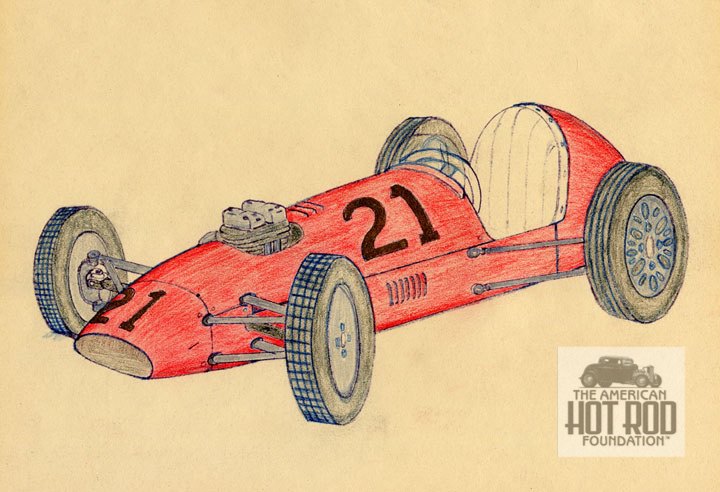 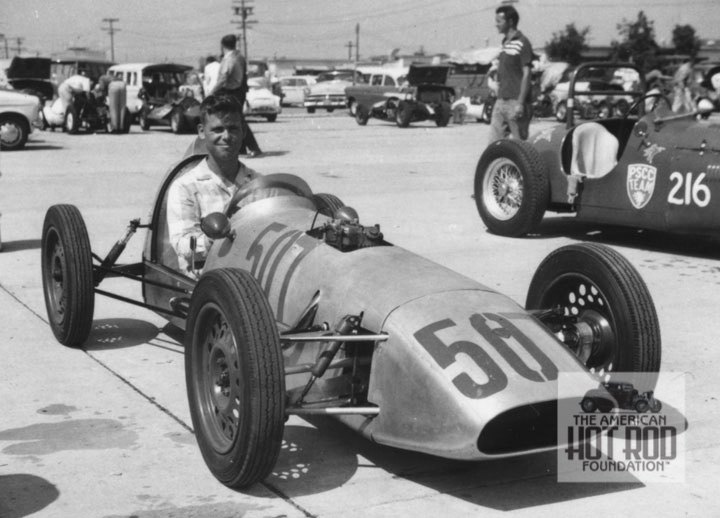 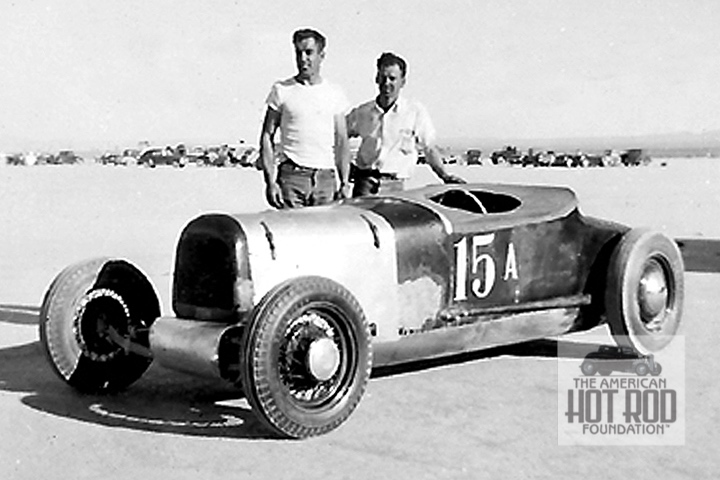 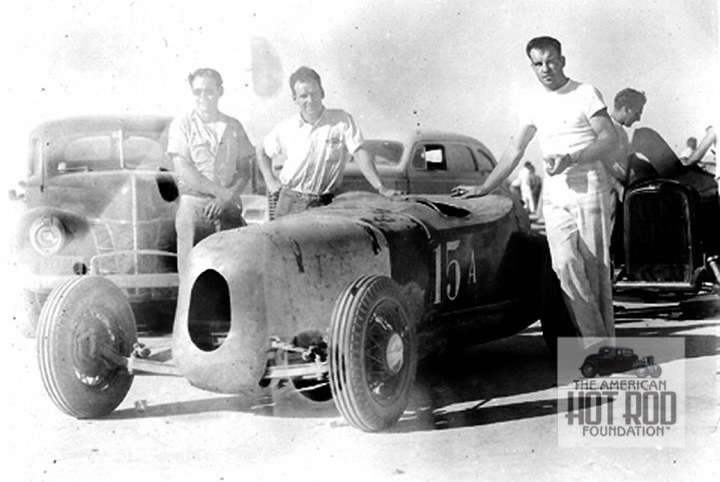 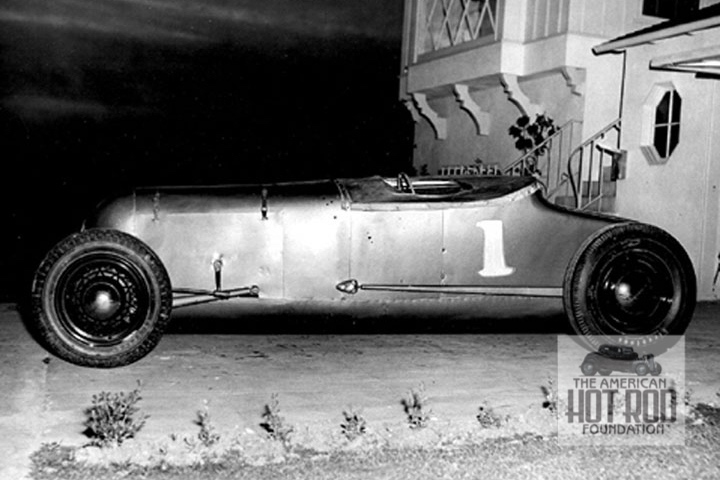 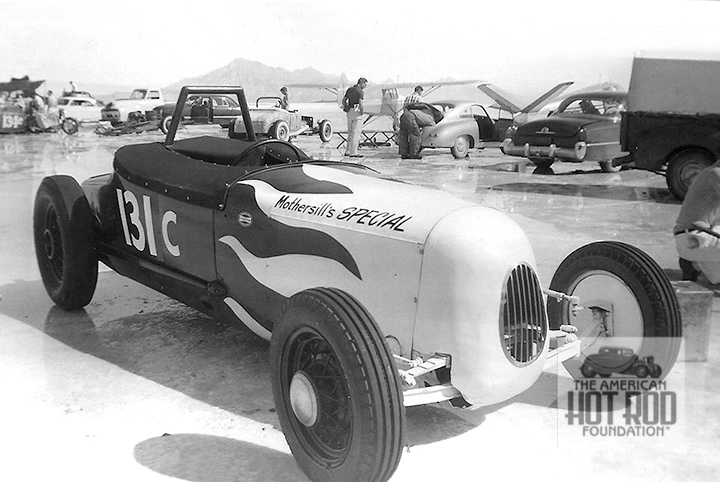