This week we finished off all our newly sent photographs. It feels great but acts as a reminder that we have a bunch of donated shots waiting in the wings that are yelling scan me first. Ah, the fun never ends.

Let’s look at a little of what we’ve accomplished this week. First up is a scan of one of the cool John Peschek shots we got that he took as a spectator back at Bonneville Speedweek in 1953 (PCK_014). Charles Sugden drove all the way from Salt Lake City to Bonneville in his Roadster Pickup complete with headlights and a windshield before strippin’ it down for competition. Under the hood of his Class C Modified Roadster was a 286″ ’46 Merc that was chasing the ’52 record of 186.09 mph set by the team Waite & Bradshaw. Charles managed a run of 130.62 mph that was good for a 13th in class behind the Cagle-Fugatt ride in first at 190.57 mph. To see a color shot of Charles’ car all you have to do is pull out your old copy of the December ’53 issue of Rod & Custom, it’s on the cover. Car 563 in the upper left is the class D Modified Roadster of George Wilson also from Salt Lake. He ran 150.25 mph for a second in class behind Ak Miller at 174.08 mph. Dig the nice looking rear hairpins that reminds one of period Indy cars.

We see the Maiwald-Callahan Competition Coupe and Sedan at Speedweek in 1953 (PCK_027). The car was entered in both Class C and D as seen here. In C it was powered by a 295″ 48 Merc and was chasing the ’51 record set by Dawson Hadley at 160.132 mph. It ran 136.67 mph for an 8th in class behind front runner Fox-Cobbs at 173.07 mph. For class D (as seen in this shot) it was powered by a 389″ ’53 Cad. The record in that class stood at 194.34 mph from the previous year but was retired as Mickey Thompson had run two engines in his former Bill Burke’s built Bantam. Seems the newly revised rules now only allowed one engine so it was like starting from scratch as far as the record was concerned. The car ended up running 136.67 mph, or the same exact speed as it had run in the C configuration.  That speed was good for a third in class behind Don Bishop’s 1st at 161.57 mph.

All of the above shots were in petty good shape and required only spotting. Our next two were a little different story as they were well used before they made their way into Bill Phy’s great scrapbook. Welcome to mid-1946 and a historical ride in the form of the Bill Burke built first ever belly-tank Streamliner (BPC_060). The car was initially powered by a little V-8 60 that gave way to a bigger Merc V8. We have the yellow car running 131.96 mph before morphing into a Modified with an abbreviated tail and a new pink paint job. That’s future partner Don Francisco leaning over the engine. Behind the car is Phil Remington’s Ford flattie powered Modified. Half a century later both cars would have clones built in their spitting images for the modern generation of enthusiasts to enjoy.

Lots of the old cameras use to leave nice scratches in the emulsion as the film was advanced and this shot fell into that category. Some time and patience, along with a little computer magic bring you the brought back to life shot of Jack Calori beauty (BPC_058). The Lancers member ran his Class C Roadster at the lakes during the 1947 meet. Feeding those swoopy exhaust pipes was a Merc flat motor fitted with Eddie Meyer heads, Phil Weiand intake manifold, and Clay Smith cam. We have Jack running second in class at 125.34 mph in May, second at 124.65 mph in July, second at126.93 mph on August 10th, 126.43 on August 31, 128.38 in September and 124.82 mph in October. Jack ended up fourth overall that year in individual.

Last week I was gushing about the Jere Sheehan Cam Snappers jackets he sent. This week it was set up some white paper and make a few digital exposures for your pleasure. JSC_089 shows the results. Hope you like them.

Here’s one of Doug Rasmussen shots taken of Gene Manicapelli’s glass-bodied ’23 T at the 1969 GNRS (DRC_171). At the time color slides cost so money for those of us in the military so we opted to shoot color negative film instead because we were cheapos. It kinda comes back and bites us as the neg film doesn’t last like the slide film, ie lots of pinholes and color shift. Luckily Doug’s negs were in great shape having been stored properly all these years so it only took about a half an hour to bring this one back to life. Gene’s car features a black tube chassis and chrome undercarriage. Out back is a Jaguar XKE rear end. Inside is a black glove leather tuck and roll interior and the outside is painted Candy Cherry. To the right of the car is Joe Cardoza’s ’29 Ford Roadster Pickup. Power is a 289″ Ford with Crusamatic trans that feeds another Jag rear end. The Naples Orange ride features a shortened bed, bobbed rears and a brass radiator.

Doug’s shots came to us nice and neat in envelopes. He even identified the venues and years making our job a little easier. Most of the showcars were snapped at the GNRS in various years but a few were snapped at the Sacramento Auto Show. In this shot, we see Greg Turretto’s “The Joker’s Wild” taken at Sacramento in 1966 (DRC_196). Starting with a ’23 T Roadster, not much is left of the original. The frame and running gear are chromed and the rear end was pirated from an XKE. An Ardue OHV conversion fed by mechanical fuel injection provides the go. It rides on polished mags fitted with Blue Streaks. It was a wow car at the time.

Longtime Bonneville racer Gary Hartsock is a Bay Area resident, Corvette nut, friend and also an AHRF Contributor. Here ‘s one of the more interesting GNRS shots we received from him that is also a really famous racing car (GHSC_192).

Here’s a little back story— This is one of only three Maserati Tipo 151’s that were ever built. Its chassis and engine were stamped 151/006 and was the third and last car built. It was originally sold to Brigs Cunning for his attack on the 1962 Le Mans 24 Hour Race. It was driven by Bill Kimberly and Dr. Dick Thompson and retired after 5 hours when the brakes failed. It raced a few more times in Cunningham colors before being sold to San Francisco car dealer named Bev Spencer who raced it once and then sold it to Drag Racer Chuck Jones. It raced three more times in ’63 before being retired for street use and was repainted red. It then passed on to a San Francisco resident Bob Reynaud for $7,000 and a Lincoln Continental. It later went to a car dealer in San Jose. The story continues that it was in private hands until ’83 when Peter Kaus bought it to display in his museum in Germany. In December 2006 it was auctioned off at Bonhams for $1,676,303. In August of 2013, Bonhams auctioned off a Block, cylinder head a few other parts for a Maserati V8 that were stamped 151/006. Looks like the million dollar car didn’t even have the original engine in it.

Looks like Gary’s picture fills in a gap in its missing years as it shows the Maserati at the 1966 Grand National Roadster Show with a restyled nose after supposedly being crunched in a street accident that nobody wants to acknowledge. In the background is the rear of Greg Turretto’s T seen in DRC-196 that sported ’65 Ford Galaxie Station Wagon tail lights. Between the Maser and the T in the background is a Fiberfab GT40 clone on a VW chassis. It was owned at the time by B-ville racer and future GNRS AMBR Winner Denis Varni. Small world!

Next up is a shot that I bagged off the net (don’t know who shot it to give credit to) showing the Maserati as it looked when it sold for big bucks in ‘06 (Tipo 151 Today).

At the AHRF we do research so here’s a rear of Colonel Simone’s Maserati of France Tipo 151/1 Coupe (the first one built) at Le Mans in 1962 during the 24-hour race. Maurice Trintignant and Lucien Bianchi (both famous drivers) were tapped to shoe them. A nasty sounding 3.9 liter V8 rested under the hood of the last serious front engined racer the company ever made. They DNF’d and were classified as 30th after tire problems and the suspension didn’t get along together during the night.

More backstory— The car was modified for the ’63 race by the addition of a 5-litre fuel injected engine producing around 430 hp. It was renumbered 151/002 and driven by Andre Simon and American Lloyd “Lucky” Cassner. It retired from the 24 hour with gearbox problems after only 4 hours. In ’64 the wheelbase was stretched around 4′ and rebodied and renumbered 151/003. Andre Simon and Maurice Trintignant drove the car and it again retired after nine hours. The car was updated again for the ’65 race and at the test session driver, Lucky Cassner wasn’t so lucky on the wet track and crashed to his death destroying the car with him.

We have to blame Gary Hartsock for the diversion so as payback here is a picture of Gary’s favorite kind of car (Corvette) taken by journalist Bernard Cahier at the 30emes Grand Prix d’Endurance les 24 Heures du Mans, or as we call it, the 24 Hours of Le Mans on June 24, 1962. (JMC_4885). American Tony September and Englishman John Turner showed up in France with an almost stock Corvette that was powered by a 5359cc Chevy V8 that would buzz along at 140 mph. Running under the banner of Scudereria Scirocco, they were a DNF. After 14 hours Turner missed a shift and messed up the tranny. Tony jumped back in and drove for two more hours before the gearbox broke in half. They were classified as finishing in 31st out of 82 cars entered.

The New England Hot Rod Reunion is next weekend and the AHRF will be there. Be on the lookout for something on it in our next blab fest. 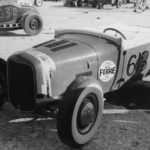 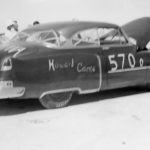 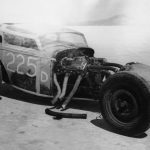 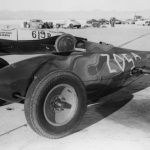 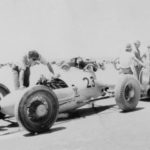 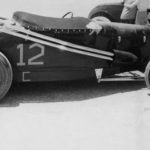 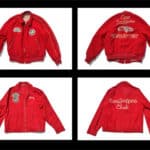 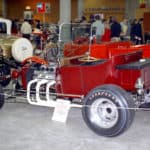 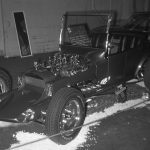 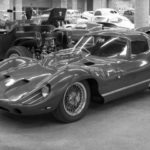 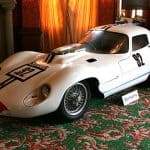 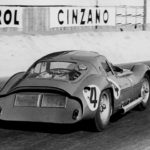 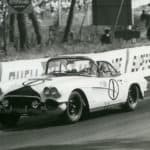 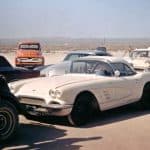