As I mentioned last week it was off to Epping New Hampshire and New England Dragway for the second installment of the New England Hot Rod Reunion. After spending Wednesday through Monday getting to and fro it was time to spend Tuesday getting some pictures sorted and penning a few words to let you know what went on at the cool event.

While walking around on Friday shooting pictures for you I ran into my bud Ron Hope who runs the “Original Rat Trap” and he mentioned that George Poteet had had a little accident at Bonneville around 380 mph in the Speed Demon and that he was A-OK. Tonight I attended our bi-monthly Sidewinders meeting and talked to Ron Main about the crash and he showed me some pictures of the car at the flats. It really didn’t look all that bad considering the speed it went over and have arranged to go out and have a look at the car tomorrow morning. I’ll have a mini-report on it next week for you.

In the meantime, lets have a few looks at some of the interesting rides at this year’s East Coast Bash. Why not start with a couple of classics. Bet everybody’s heard of Pure Hell and The Rat Trap. Well here’s a shot of both cars in pre-stage at the Reunion (JMC_5095). Pure Hell’s on the left and the Trap is on the right. We even see Mr. Hope adjusting the air pressure on the Trap before their first exhibition run on Saturday. The crowd loved the burnouts and the runs.

Seeing the old rides is all part of the Reunion and our next shot is a good example of the rails that show up (JMC_5091). Up front is a ride called “Alley Oop”. The chassis was built by a company called Lyndwood Welding based in Wilkes-Barre, PA. It’s pretty simple and features a lot of special aluminum castings by the chassis maker that make this car a keeper. AChevy V8 provides the “Oop”. Behind it is an early ‘60 Dragmaster chassis with a second roll hoop added that goes by the name of “Hellzapoppin”. We know Hellzapoppin was a wacky movie released in late ‘41 that starred the likes of Martha Raye, but since every race car has to have at least one “stooge” on the crew may be using the name on the car is OK after all since Shemp Howard had a bit part in the movie.

About half-track in the pit area was another oldie but goody called “Instant T” (JMC_5090). Charlie Greer and Willie Jodoin put this car together back in ’70-’71. They started with a real dragster chassis and shortened it, moved the rear end back and fabricated everything themselves. The engine is a 365″ Chevy that was blown and injected and it propelled the car to a speed of 165 mph in 9 seconds flat. It even appeared at a Joe Kizus Hartford Autorama and won its class. What’s even cooler is that after it’s racing days were over the cars was put “out back” for only 42 years. It was recently dug out, had a little air put in the tires and brought to the Reunion for all to see again. We should put Way in front of Cool as a good descriptor on this one.

Some of the wackiest drag cars showed in the mid-’60s in the form of altered wheelbase rides. John Grrinwald’s ‘65 Dodge called “Gold Digger” is a perfect example (JMC_5092). We bet the 426” Hemi made this one Hurry as well as giving us a few wheelies to boot.

This ‘39 Chevy caught our attention post haste when driver Pete Boyer buzzed by because of its interesting paintwork (JMC_5094). By the looks of it, the front end probably becomes airborne pretty easily so it must be really fun to drive.

Over in the spectator area, we found a lot of interesting cars and this one looks like it could have run at the lakes in the early ’40s (JMC_5093). A Ford banger supplied a quickie rear end on this nicely detailed ‘29. The newly made not to comfortable looking double-occupant seat sported a Hughes Aircraft tag on it and mucho rivets.

We’ll bring you up to speed next week with more show info and stories after I get some sleep. 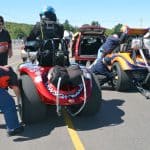 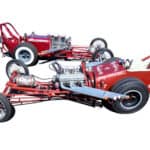 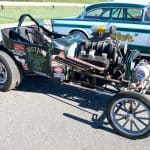 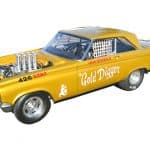 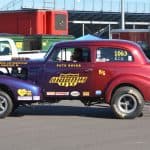 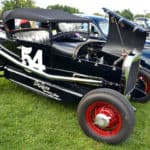