We had a good time last weekend at New England Dragway during Hot Rod Reunion II. The car count was up, so the folks at the Wally Parks NHRA Museum, Larry Fisher and Greg Sharp, were happy. And the weather was great except for a little late Saturday afternoon rain.

The AHRF had a booth at the show again this year to let more folks know that we exist and we even sold some goodies to boot. The booth was flanked by two really cool rides, a ‘63 Pontiac Grand Prix and a ‘62 Ford Galaxie both in hot rod trim and a trip down the track for being the most original muscle car around. Way cool!

During the week we got a chance to go through some of the Reunion shots for you so here is a couple for you. First up is this slick looking Corvette snapped in the staging lanes and listed as running in the Modified Eliminator class (JMC_5111). Under the blower lurks a 427″ Chevy that runs against a 10.00 index. Driver Michael Alessi from S. Berwick ME cut a 10.022 light to qualify for fourth in the 17 car. The Ford even won a trip down the track for being the most original muscle car around. Way cool!

The great thing about going to these events is seeing cars you don’t normally see. Take for instance “Farmer” Arnie Beswick’s 1966 Pontiac Tempest GTO (JMC_5121).  Starting with a ’64 GTO chassis Arnie added a glass body, tube front end went on tour with his then new-fangled “Funny Car”. After just a few races in ‘66 the car picked up the name “Star of the Circuit” and almost 50 years later the outrageous car is still wowing them.

Last week we showed you an aerial shot of Hellzapoppin and Alley Oop. We couldn’t resist showing you another shot of the “Oop” about ready to run over us (JMC_5115). Compared to today’s rides this car is really primitive with it’s little Chevy V8. We’ve also included a shot of the car’s show card to give you a little insight into its history (JMC_5116).

Last year at the show a gent named Dick Pratt introduced himself to us. We hit it off immediately and he started telling us stories about racing in the good old days. When I got home after last year’s Reunion it was time to do some serious research on right coast racing. Between our bud Jere Sheehan down in Florida and the departed A.B. Shuman and his book “Cool Cars Square Roll Bars” (JMC_5117) were getting a small handle on the way things really were in the East.

Between then and now we have some of Dick’s stories digitally recorded for posterity and a bagged picture from A.B.’s book showing Mr. Pratt in his ’34 Ford 5-window coupe at Laconia, New Hampshire back in September 1954 leaves Frank MacManun in the dust (JMC_5118). We hooked up with Dick again this year and more bench racing ensued. We also got to meet a dozen or so of his racing buddies from back in the day, hang out in the grandstands and spend some time in the NHRA Media Center looking at old drag pictures and getting more stories.

Talking about Jere Sheehan, he had me on the lookout for some of his old Cam Snappers club members at the Reunion. Howard Salt was one of them and we hooked up on Friday. Needless to say, more great stories were told. Howie came back on Saturday with a little present in the form of a CD called “Dragging at Sanford” (Maine) circa 1957 consisting of you guessed it, old drag race footage. Now we really have to become experts. Thank you again Cam Snappers of Newburyport.

It never fails that when I go away for a few days there is always some kind of package on the porch when I return. This time Bonneville racer Gary Hartsock from the Bay Area sent one filled with more treasures from the past. In the past, we’ve talked about getting stuff that we didn’t even know existed. Well, Gary sent us a few copies of a newspaper called “The Wheeler” that covered motorsports in that other part of California that isn’t Southern. GHC_231 shows us the Masthead for the then bi-weekly published out of Menlo Park, California and cost 10 cents. If you subscribed you’d get a whopping 15 issues for a buck. It would soon change its name to The Wheeleeorthern Californfornr, Drag and Custom News and be published weekly. Some of the venues covered were Kingdom, Madera, Vaca Valley, and even Bakersfield. It also covered Drag Boats and Sports Car racing. So, if you want to know all about a car called “The Zombie” from Oregon just check out the November ‘58 issue and find the chopped 3-window Deuce was powered by a 364” Nailhead and ran 121 in the quarter.

Another rarity from Gary is Volume 1, Number 1 of Car Speed and Style from December 1957 (GHC_5112). We’ve included a before and after of the cover that was published by Magnum Publications out of New York, City. The cover illustration was by John Schoenher that depicts the latest trend in the car world at the time, dual headlights. The Deuce in the insert cost owner Gaylord Scrievers all of $90 before mods started. It was powered by a Buick Straight-8.

Yet another find in the package was a William A. Moore’s print showing a Porsche Spyder model 718-RS 60 from 1959. The factory built 14 of these machines. When I visited Bill’s studio in the early ’60s after a stop at Craig Breedlove’s house to see the “Spirit of America” being built, the original Porsche drawing was framed and hanging on his wall. Thanks for the re-memories Gary.

During the latter part of the week around the hour when carriages turn back into pumpkins I was looking through a few years of old mags for fun and to also put me to sleep. Yet another magazine cover said it needed scanning so we present Volume 9 Number 8 of Car Craft Magazine from December ‘61 (JMC_5119). Inside were stories about Bonneville Speedweek, the 7th Annual National Drag races and it’s accompanying car show held at Indy. There was also a spread on restyling the new Olds F-85 featuring illustrations by one William A. Moore. Small world!

That’s a good segway into more retouched car show pix. Melvin Pardue and his wife from Kingsburg, California are the proud owners of this T-Bucket that’s seen at the Sacramento Auto Show in 1966 (DRC_212). The car was powered by a really warmed oveeallyr ’62 421″ Pontiac and featured a Cal Automotive fiberglass body.  It was painted Candy Tangerine by Junior Conway and the black button-tuffed interior was the work of Eddie Martines, both heavyweight in their respective trades.

Our next shot was taken in ‘67 at the GNRS (DRC_183). It’s a bummer that we don’t know anything about the modified Phaeton. What we do know is that the tail of the other Phaeton on the left is the work of owner Art Himsl.

Last week we touched on the George Poteet crash while he was driving Speed Demon around 375 mph at Bonneville. There is some video footage that’s been posted on other sites of the crash from two different camera locations, one in the cockpit and one pointing out the back. We looked at it more than a few times and then had a talk with Ron Main about what happened. The bottom line is the car put out so much HP that the tractionless spinning rear tires caused the back end came around on the left and then rolled. We think it went over 12 to 14 times and pirouetted just as many before finally stopping on its side. On Wednesday I rode out with Ron to have a look at the car at Steve Watt’s shop in Oxnard.

In the first shot (JMC_5114) we see the rear part of the car. At first glance, basically, everything is in place. The stainless water tank above the rear end didn’t move and wasn’t even touched. In front and behind the tank are composite bulkheads that held the body in place. Through the front one protruded 5” stainless exhaust pipes facing rearward, one on each side. These guys took quite a beating when the car was upside down but stayed in place due to their tough construction. Right behind the front bulkhead you can see the chassis down tube that supports the extension of the main chassis. Note the rust where it slid on the salt and took the paint off. Basically, it has zero damage. The rear bulkhead is pretty much all there too, considering the impact. The chassis from this bulkhead all the way to the end of the chute tubes is all intact except for one area below the red fire bottles that we will look at now (JMC_5120). Note the 2” ID square receiver tube that’s now sheared off. Also, note below it that the 1 5/8 inch .125” wall 4130 chassis has been ripped away. Looking through the chassis on the other side you can see that the at the 1.5” x 5” wide channel section that use to hold the air jacks is what ripped the chassis away. The support tubes closest to the camera are 1” OD .125 wall 4130  that were literally ripped off the now missing jack support. It took a mighty hard blow to rip this stuff off. The incident report said that after the first few rolls the car flew 500 feet before it made contact with the ground again. Talk about energy.

Let’s have a look at the cage area (JMC_5113). You will see that the composite bulkhead behind the cage is basically all their. It’s backed by an aluminum firewall and the whole thing moved very little. The 1/4” bolts holding it to the back of the cage didn’t even shear. Again note the rust on the cage where it skidded against the salt. Luck was really with George as the cage didn’t take a real hit. An interesting observation is the flat aluminum plates that held the switches on both sides in front of the cage. When the switches hit the salt in the rolls it pushed the plates 1/2” inward. Looks like flimsy doesn’t cut it anymore.

The whole front end stayed on the car. The steering box had some play in it but wouldn’t you after a hit like that. There is a plated bulkhead behind the front wheels and in front of the driver. About two inches behind the supporting down tubes the lower chassis tubes were broken on both sides. There were other places where you could see the tubes compressed into themselves and others where they were stretched. A couple of welds failed on smaller support brackets but for the most part, everything worked to a T.

When you consider that the original chassis was built in 1990, rebuilt from a lakester into a streamliner, crashed, totally rebuilt and stretched, then stretched again and then again, and went from a 2,000-pound car to 5,000 pounds, it’s a testament of sturdy construction and durability. The chassis is a dead soldier now but the engine will live again to go over 400 mph.

This just in— The World Finals/Speedweek has just been canceled by the S.C.T.A./BNI Board due to a lot of rain falling on the salt. 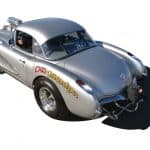 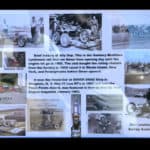 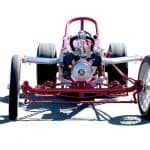 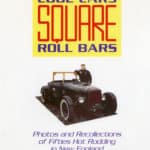 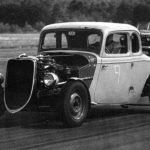 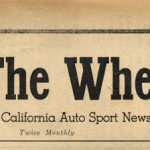 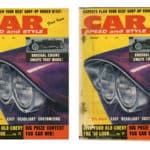 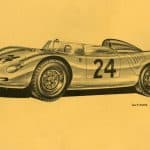 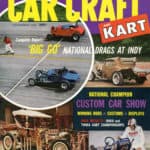 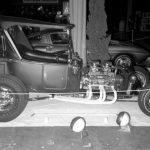 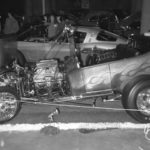 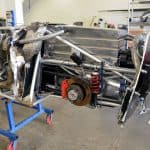 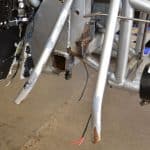 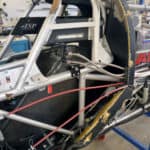