I use the above saying as meaning we’ve seen or have some info or a picture on a particular vehicle to go with the close statement. Sometimes all we have to do is type a name into our database and presto we have some info to work from. Other times we can’t put our finger on where or when we’ve seen our subject and that leaves us without a cigar to celebrate our find.

A good example of this dilemma is a newly scanned image from our Don Cox Collection (DCC_312). We knew the car from a previous scan in the Foundation’s collection (EMA_011) that showed an unknown starlet posing in the car for an MGM Studio publicity shot back in 1947. The car belonged to Sidewinder member Art McCormick who put together the customized ’29 Ford for the street, lakes and show circuit. This shot shows the car in street trim and when it was painted blue. A ’41 Merc was warmed over with Weiand heads and cam, Navarro 4-carb manifold and Spalding ignition. Note the use of post-’34 Ford front end setup with the ss spring in front of the axle that gave a smoother ride and lower stance. We deduced from other images of our newly scanned car (DCC_312) that were taken at the same time that the year was 1949. These shots also revealed a front Club Plaque that said Gamblers Car Club Member and the words Las Vegas, Nevada on the rear between the ‘39 Ford taillights. We thought all we had to do was find the car number in the ‘49 results and call it a slam-dunk. It turns out that the car was a guest entry with an un-recorded name or speed. Bummer.

Next up lets us at least put a cigar in our mouth but we can’t light it yet (CKC_1537). This shot was taken in 1939 at an unknown Northern California (Bay Area) venue. Roadster racing was a totally different animal that down Los Angeles way. Most of the up-north cars used Chevy chassis’ (they handled better) with Ford motors occupying the engine bay. On the pole, we see Gene Figone in the number 12 Andy Special.

For our next shot we see Gene Figone in another chevy track-roadster at San Jose most likely in 1938 (CKC_1550). The body is a ’23 Chevy and the chassis is a later version of the same make. Under the hood is a Ford banger with dual Winfield carbs and a Winfield head. We like the cool looking sprint car type grill shell. We’ve discovered other shots of Gene in different kinds of cars but had no clue as to who he was. That is until just a few days ago when we were researching a bunch of racing papers from before WWII. Here’s what we found written by Jimmy Joy and published on December 11, 1941.

“San Carlos, California— During the month of October, the East and mid-West lost three of their great  champions— (Tony) Willman, (Gus) Schrader and (Ben) Shaw. Their loss will be felt by all of the racing fraternity, but here in San Francisco and all of Northern California, we too have lost a great champion. It is possible that he was not well known in other parts of this great country because he confined most of his racing to these parts. The next time you Eastern fans have the opportunity to see or talk to (Duane) Carter, (Paul) Swedberg, (Cal) Niday, (Buck) Whitmer or any of our West Coast stars, ask them about Gene Figone.”

“Gene was one of the most colorful pilots that San Francisco has had the pleasure of calling their own since the days of our own Jimmy Murphy. It is possible that Gene could of been just as great a champion as any other racing chauffeur in the country, but he couldn’t leave San Francisco and all his friends. I and all the other fans of Northern California take our hats off to Gene Figone, and not goodbye Gene, but we’ll be seeing you again someday.”

“At this same time the Bay Cities Roadster Racing Association, Inc., wishes to acknowledge and thank all the following persons for donating their help and assistance in making such a huge success of the Gene Figone Benefit Race held on Oakland Speedway November 16. To Charlie Curryer for the use of the track; Swanson for the sound system, the ambulance crew, West Coast Patrol service, Eddie McLellan the N.A.R.N. photographer who so generously donated over 100 8×10 photos for resale, Don Carlton who handled the proceeds as they came in, Grant Douglas who did so much to help settle all funeral arrangements, George Richardson for his assistance, all the officials, car owners and drivers of the B.C.R.R.A. who donated their time and equipment to stage such a successful race. Mr. and Mrs. Lou Vermiel who so graciously handled the ticket sales up in Calistoga, all the fellows who put in so much time to sell so many tickets and to all those who purchased tickets and pictures.”

“Following is our account of the money received and paid out. The total amount received was one thousand, two hundred, sixty-two dollars and fifty-five cents. ($1,262.55). Bills paid out were as follows:

“After paying these bills it was found that there was $477 left. This money was divided between Gene’s mother. Mrs. Rose Figone, and his wife, Bette. They each received $238.50.”

This guy must have been pretty damn good if he is being compared to the great Jimmy Murphy.

For our next no cigar, we only have to go as far as our next shot (HZC_004). Herb Zieman was a young kid when he went to the Detroit Nationals in 1960 and took this cool shot with his Kodak Brownie. We know we’ve seen the car published somewhere so we dug out our Rod & Custom’s and Hot Rod’s to see if we could find a picture. We struck out but won’t give up. For some reason, I think the car was red.

The above shot reminds us that dragsters were still in the evolutionary stage in ‘60 and hadn’t reached the cookie-cutter stage that they are today. A decade later you could still find experimenting like this complicated front end seen on Tommy “The Watchdog” Allen’s restored dragster (JMC_2210). We snapped this shot at Don Prieto’s United States Food and Gas Championships Party held on March 13, 2011.

That’s a good segway into another drag car experimenter that went by the name “The Loner”, that’s right, the one and only Tony Nancy. Tony hooked up with an Art Center student by the name of Steve Swaja and brought some real style to the sport. We see one of Steve’s drawings for a rear-engined ride that would have looked really cool (TNC_986).

Digging to find obscure stuff is part of the fun around here. We ran across this caver of Popular Mechanics from March 1929 depicting an artist’s take on the Campbell not so blue “Bluebird” threading the needle at Daytona beach. I’m thinking taking out a pole at high speed holding the bull’s-eye would be just a little bit dangerous.

Our next shot is but one of hundreds from Tom and Anita Zelesky, taken at El Cajon Speedway that is going to deprive us of even thinking about lighting up (MWC_021) We can make out a George ???? Man on the Nova’s top but the Camero is a zip, zero, nada.

Since we’ve been stumped for a few shots it’s time to slide in one that we can tell you a little something about (JMC_4517). The location is 8921 David Avenue in Los Angeles, or half a block east of Robertson Boulevard. If you go South on Robertson a few blocks you’ll pass Hamilton High School on the right and in another two you’ll go under the Santa Monica Freeway. The date is Saturday, July 18, 1942. The car is Stuart Hilborn’s 21 studder powered Streamliner. The lady that jumped in the driver’s seat for a photo op is Patricia Miller, aka my dad’s sister and my aunt. The next day Stu was at Harper Dry Lake and cut a lap at 127.11 mph for a second in class behind Charlie Beck driving his and his brother’s rebuilt Bob Rufi Streamliner. For a little trivia, seven years later Mr. Beck took a bride that was the former Patricia Miller. Please note the American flags flying proudly. I would have been minus three at the time so no cigar could’ve been lit.

DBC_907 is another one of our new scans. The shot shows Kelly Petillo or Arvol Brunmier getting the back end of the Gilmore Speedway Special owned by Harvey Ward a little out of shape trying to keep ahead of the Joe Marks owned Lion Head Special driven by the 1932 AAA National Champion Bob Carey at Legion Ascot. Carey crashed to his death in this car at Ascot on April 16, 1933.

Last up is yet another new scan done this week that shows Starter Bob Higbee getting-giving last-minute instructions from-to the timing tower before letting the Ramjet & Ward Class B Fuel Streamliner have at it at El Mirage on July 11, 1982 (DBC_920). The Sidewinders members were after the existing record of 275.220 mph and managed a run of 234.986 mph for a first and only in class and received 170 points. On the left is the green Class I Production Karmen Ghia wearing number 57 that was named Larry’s Old Volks Home and owned by long-time racer Larry Monreal. He was after the 96.870 mph record but fell short with a 75.062 mph lap. He received 154 points for the effort.

Were finished for this week and it’s only 11:45 PM, sadly just a tad too late to light up. 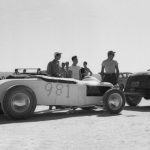 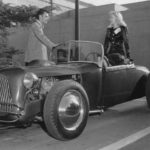 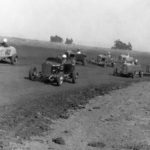 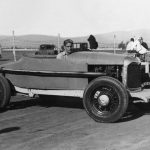 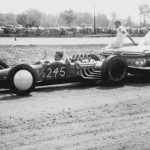 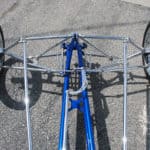 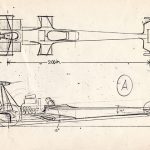 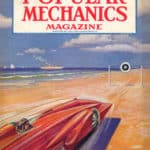 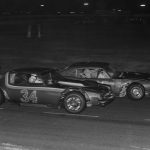 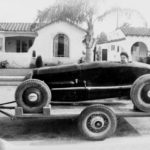 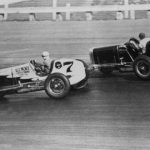 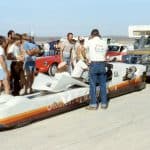 Previous Post: « This Has Been One Hectic Week
Next Post: Color or Black and White »
↑ Top of Page