Ron Hope shows up everywhere with one of his cars. At the August 8th SCTA Mile at the Mojave Spaceport, he was there with more than one ride (JMC_5565). We snapped a picture of his Modified Roadster waiting in line Saturday morning before it’s first run at 11:36 AM. Unfortunately one of the twin Turbo’s gave up so that sat out the rest of the meet. Bummer.

On our rounds collecting materials to share with you, once and awhile we find something that’s been off the radar for ages and our next image is one of them (JHC_1252). Craig Breedlove teamed up with Bill Neely to pen this interesting story on the “Wonderkid’s” adventures in the rodding world. If you’re into land speed racing and making dreams come true this book published back in 1971 is a must read. In the latter part of 1960, I had the privilege invited by a friend to have a look at the mock-up of the “Spirit of America” jet car at Craig’s dad’s house in the newly extended 40-foot garage. Needless to say, this 15-year-old at the time was mighty impressed.

Friend and AHRF Contributor Kay Kimes sent me the next image during the week and I was blown away (KKC_071). He got it from his wife who was a relative of the Pat Campbell who the photo was autographed to by none other than Harry Hartz way back in 1931. Naturally, we had to do some digging around here to figure out something about the shot. The AAA had some speed runs at Pismo Beach on August 30, 1931, so naturally I thought the shot was taken there since Harry autographed the shot on August 31. Wrong! The Pismo AAA Sanction number was 2540 and the sanction number painted on the hood of the Chrysler Imperial 8 said 2488 so logic says the picture was shot sometime before the Pismo meet (maybe at Daytona?). Records are sketchy on AAA Sanction Numbers so we can’t pinpoint the event location as of yet. It’s just another mystery that we’ll have to solve here at the AHRF.

The car is interesting in that it’s a 1931 model. It has the standard grill shell insert but had a V windshield like on the special Le Baron-bodied roadster. The chrome strips on the rear fenders were also only on the Le Baron model but the driving lights are missing.

It gets even more interesting. The standard Chrysler 8 engine was produced till 4-31 and displaced 240″. A Deluxe 8 was introduced in 4-31 and ran till 11-31. It displaced 282″ (the Deluxe 8 Roadster didn’t have a V windshield). The Imperial 8 displaced 384″ and had a 145″ wheelbase but weial Le Baron-bodied roadster. The chrome strips on the rear fenders were also only on the Le Baron model but the driving lights are missing.

Could this of been a special car built for Hartz by the factory to break records for Advertising purposes? We do know that they only made 100 of these things so it is a special car indeed.

I called Kay to say thanks and we ended up doing some bench racing on the phone. One thing leads to another and then I was getting the scoop on Kay going to Nassau for Speedweek with Bill Fowler and Dan Gurney back in 1963. Naturally, that ties into our next shot we just received from Joe Henning (JHC_1296).

Welcome to the “Grand Prix de Volkswagens” held at Nassau Speed Week back in December 1963. It was a combined race featuring every day (stock) Volkswagen sedans and Formula V’s (open-wheeled race cars powered by Volkswagen flgen flat-4’s). There were 18 sedans and 17 V’s. There was the Le Mans start for the sedans (a flag dropped and drivers sprinted across the track, jumped in their cars, started the engines and took off). One minute later the V’s (in the background) was flagged off in hot pursuit. First home was Charlie Kolb in a V and in the sedan it was Dan Gurney. Each picked up $1,000 for the wins. The downside was that Gurney’s VW was protested. After a teardown, all was decided to be A-OK so Dan got his money. As a side note the car was prepped by EMPI (Engineered Motor Products Incorporated) by one Dean Lowry (drag and lakes racer) that was located in Riverside, California (where Gurney lived). Small world!

Since we’re going wacky on you, here’s another off the wall tale. Back in the mid-‘50’s Mercedes-Benz built some all-conquering race cars using a new form of chassis construction called “space frame”. One look at this special photo tells you that it’s a Mercedes-Benz W 196 2.5 liter Formula One car chhcar chrcedes-BenzBenzassis (JMC_4579). To digress on the left of our chassis is one of two 300 SLR Coupes were initially conceived in March 1954. In front of it is a production version of the 300 SL from 1954. To the left of the 300SLR is one of the streamlined bodies off a Grand Prix car with it protective covers over the front fenders. In the rear left is bodywork off one of the monoposto GP cars. It sports the number 21. A little digging revealed that this was the body off the fifth car built. It ran this number in the August 1, 1954, German Grand Prix at the Nurburgring and was driven by Herman Lang who DNF’ed with engine trouble. At the first GP held in 1954 at Reims on July 4, Karl Kling drove the car as number 20 and was fitted with a streamliner body to a second place finish. On August 22 at the Swiss GP Kling drove it again as a liner that wore number 8. He DNF’ed again with engine trouble. For its last ’54 race at Barcelona on October 24, Kling drove it with a monoposto body again and finished 5th wearing number 4. In the center at the rear, you can see two workmen with the lower body of the streamlined version. Lots of info for just one shot right?

Well back around the same time (in mid ‘50’s when I was around nine years old) there was a photo in possibly Speed Age Magazine showing a miniature model of the proposed Mercedes-Benz 300SL chassis that was made from welding rod so that the engineers could physically twist it in their hands to test its rigidity. Needless to say, I was impressed and never forgot it. Fast forward a decade and a half or so to the early ‘70 when it was time to build a Formula V chassis (yeah just like in the Nassau shot but more grown up). JMC_4686 shows one of several concepts that were built in ‘72 and managed to survive hanging on the garage wall. It’s all rusty now and brings back lots of memories.

Next up is another survivor (JMC_701). A sketch of the Formula V from that time. Between the body and the side-pod, there was an inverted airfoil that was just a few years ahead of Colin Chapman’s F1 Lotus thinking but the idea was stolen from Fritz Von Opel’s Rocket cars from the late ’20s.

While on the drawing kick here’s one from a story on dry lakes racing that appeared in the Lincoln-Mercury Times Magazine dated April 1948 (RON_096). To do the drawing justice how about a color shot of the real car from our friend Bob Morton (BMC_110). It shows Sidewinders member Art McCormick’s ’41 Merc powered Class C roadster fitted with Weiand heads, Navarro manifold, Winfield cam, and Spalding ignition. Art ran 114.21 mph. Car number 590 in the background is Detonators member Ted Pickles’s class B Roadster that was powered by a ’32 Ford V-8 with Thickstun manifold, Winfield cam, and Spalding ignition. Car number 589 belonged to another Detonators member by the name of Jim Plummer. His Class C roadster was powered by a ’41 Merc with Thickstun manifold, Zimmer cam, and Spalding ignition. They are all seen at the S.C.T.A. meet at El Mirage held on October 19, 1947.

We also sorted a few hundred new arrivals this week and have been burning the candle at both ends with the scanning. Here are a few samples. First up is a Wilson D. Ellis shot showing Andy Granatelli contemplating driver Art Malone’s Novi-Kurtis at Indianapolis (JHC_1255). It was date stamped 5-30-63. Having not made the show since ‘58 the Novi was a big deal at the speedway, especially with Andy involved. Art Qualified for the show in 23rd spot with a speed of 148.343 mph. He only lasted 18 laps in the race before the clutch went south. The other good news was that Andy’s team got two other Novi powered cars in the race. Bobby Unser qualified in 16 but only made it two laps before crashing out to a 33rd place. His shining star was Jim Hurtubise who put the Tropicana Hotel in the second starting spot. Herk made it to lap 102 before an oil leak sidelined him for a 22nd place finish.

John W. Posey took this great shot of Masten Gregory who seems a bit pre-occupied while being strapped into the Mickey Thompson Harvey Aluminum Special that was referred to as a Roller Skate by “Railbirds” at Indy in 1963 (JHC_1267). Mickey had built up a Chevy V8 that was located behind Masten, who managed to do some laps at 147.517 mph but was too slow to make the race. Dempsey Wilson was slow man on the totem with a speed of 147.832. It’s true, close only counts in Horseshoes.

Switching from the Brickyard we go to a dirt yard that was actually a D-shaped track constructed on the site that is now known as Los Angeles International Airport. The date is February 18, 1934, and the site was then called Mines Field. We see racing icon Peter DePaolo in his brand new Fahy-Lawrence sponsored 1934 Ford Roadster that he drove in the Gilmore Gold Cup Race (JHC_1296). Pete would end up finishing in third spot in the 250-mile road race in front of the estimated crowd of 75,000.

Not all of the 27 cars entered in the Mines Field Race were new cars. Eddie Meyer drove a Deuce roadster and Jerry Houck, seen here, was behind the wheel of a ‘33 (JHC_1297). All the vehicles were supposed “Stock Cars” that consisted of removed fenders, lights, and windshields. What we like most about these cars are the large numbers and cool graphics on the sides. For those interested in the race itself dig out your March and April 1951 issues of Hot Rod Magazine.

Our last shot for today is what a real Gow Job looked like in the early ‘30 (CKC_2173). All we know about the “Modified T” is that it runs an overhead valve head fed by a single downdraft Winfield Carb and was built by a Mr. Bill Statler who isn’t seen in the shot. 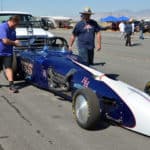 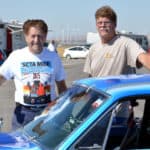 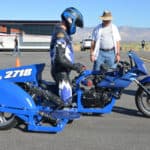 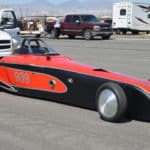 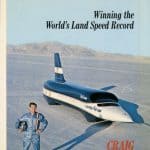 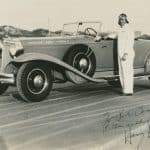 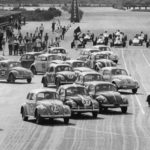 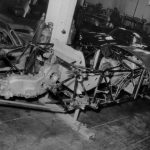 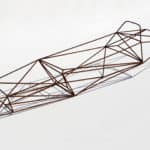 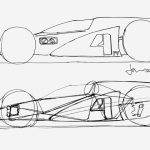 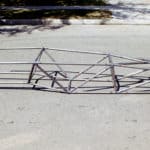 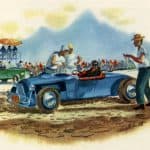 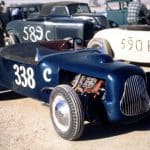 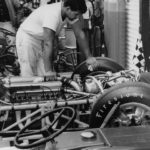 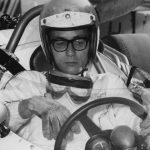 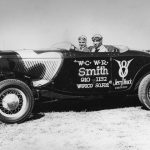 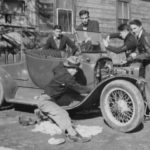 Previous Post: « More New Discoveries
Next Post: Hero is Gone and We are Confused »
↑ Top of Page