Every few months we take all the images we’ve managed to save on our hard drive and download them onto some “Dell Cartridges” and ship them back to our storage vault for safekeeping. We’re in the multiple thousands of images on our hard drive and that amount to around 1.8 Terabytes in geek-speak. That means we have a lot of shots. We’re constantly in and out of our hard drive updating captions with new info we’ve come across.

It also reminds us how far we’ve come over the years in our quality control and computer smarts. A  When we go in to update captions we also look at the images themselves and when we find some “bad jobs on our part” we get to fix them. If we’re lucky enough to have been given custodianship of an image we can pull it out and rescan it using all of our newly found skills.

DCC_241 is one such image. It started life as a Kodachrome slide snapped back in1948 at El Mirage and shows Glendale Stokers member Tom Beatty’s low slung Roadster. After a good cleaning, a rescan and some color correction we’ve upgraded a so-so shot into a winner. Under the non-existent hood is a ’32 Ford 21 studder displacing 249″. The program lists the heads as Navarro but since they aren’t Barney’s cast aluminum jobs we have to assume that they were probably stockers that were milled and filled by Mr. N. himself since he was Tom’s partner on the car. That pipe above the head was just an extension of the breather. At the April meet the car ran 129.68 mph for a second in class. We have him entered in June but no speed is recorded. For July Tom ran 135.13 mph for second in class against Doug Hartelt’s 135.33 so his tunes were going in the right direction. For August his new tune didn’t work out to well and left him with a speed of 129.49 mph for a fifth in class. In September he continued his slide down the pack with a run at 126.93 mph for a 12th. At the October meet he made a comeback of sorts with a run of 132.35 mph to end up in fifth to Hartelt’s new and improved speed of 137.61 mph.

For on Norwalk on Wednesday night to check out “Cruise Night” did the trick. Lowriders are unique unto themselves and quite a few showed at Bob’s. We couldn’t resist snapping this Viejitos club plaque through the rear window of a slammed ‘39 Chevy Master Deluxe (JMC_4780). A little digging revealed that the club was established in Lynwood, California back in 1985. The plaques are the ultimate in folk art and a rough translation of the name means “Old Man”. The Club has over 30 Chapters worldwide so is a serious deal. We found there is going to be a big show for the low and slow “Bombs” in a month or so that just might have to check out.

Just about dusk two “Sleds” showed. One was a seldom-seen ‘55 Poncho Chiefton 2-door hardtop like the one I use to own back in ‘63 (that’s called deja-vu). The other was a 1958 Chevrolet that had undergone quite a bit of body surgery. The car started life as a four-door of most likely Del Rey variety before the top was done away with as well as the rear doors being molded in. We had to snap the tail fur next act we chose this 35mm negative and scanned it about 24 times larger than its original size (DCC_306). We do the large deal on unusual and famous cars that we think would be perfect for use in a coffee table book down the road. Upfront is an interesting car listed as a ’26 T but sporting a Deuce tail section that was photographed at the June 11-12, 1949 S.C.T.A. El Mirage meet. The entrant was Bob Barlow of the San Diego Roadster Club. His Class C “Lakester” had a 267″ ’46 Merc under the hood fitted with Edelbrock go-fast parts. We have him running 127.84 mph at the May meet for an 11th in class and 130.81 mph at the June meet. In the upper left is D. W. Middleton’s Class B Lakester consisting of a ’27 Ford body and a ’41 Ford-6 powerplant displacing 226″. We have him entering in the June and October meets but don’t have any speeds on the Night Owls member.

It’s been a little warm in these parts so that was a good excuse to go for a ride and cool down. A trip out to Bob’s Broiler iiWednesday nighteather (rear light) for you (JMC_4781). It was canted upwards to match the body lines and had ’59 Cad bullet lights minus chrome trim added for a nice clean look.

The next two shots are first time scans of images that we have determined we were taken at the Edna, Kansas Regionals back in 1954 during a stop of the N.H.R.A. Safety Safari. What’s great about DCC_251 is we get a totally unique view of two “Deuces” trying to wear out their rear tires in no time flat. N.H.R.A. documents have gotta be out there someplace to help us ID these rides.

For our next offering (DCC_254) we see a nicely chopped ‘34 that looks like it might be in a Tech Line at Edna. If we were there do you think the owner would of bought the story that we were looking for a girl in red sparkle shoes with a dog named Toto and he just had to lend us his car to find her? I don’t think so but hey, one has to try.

We also received another package from our pal Jere Sheehan down Florida way. This time we got a list of all the entrants for the First Official Drag Race put on by the New England Hot Rod Council that was held at Laconia Airport back on August 29, 1954. What was amazing is that almost 33% of the entries were ‘32 Ford Hot Rods. The newest car was one of those new-fangled GM cars called a Corvette.

The Wonder Bread Special was entered in the 1933 500 mile classic by F. E. Clemons but didn’t qualify. It was driven by George Barringer. To the right is Jimmy Clark’s ’65 race-winning Lotus powered by Ford. In the background from the left is Leon Duray’s number 4 Miller that sat on the pole in ’28, Wilbur Shaw’s ’40 race-winning Maserati number 1 and Jimmy Jackson’s Cummins-Kurtis from ’50 that also set speed records at Bonneville with its Diesel engine.

We see Ralph Hepburn’s 1937 Indy ride getting its chassis set up at the Bear center within Gasoline Alley (CKC_756). Myron Stevens built the car that Ralph would drive to a second-place finish after starting down in sixth. The car was entered as the Hamilton-Harris Special and was powered by a 255″ Offy. Louis Meyer was the owner, and in ‘36 he had won the 500-mile race in the same car.

Chet Miller pulls out of Gasoline Alley headed toward the pits and then to Qualify for the 1951 Indy 500 (BHC_338). That he did with the third-fastest speed in the field at 135.798 mph. He had to start in a lowly 28th spot because it wasn’t on the first weekend. During the race, he got as far as the 56th lap before the ignition failed and was classified as finishing in 25th.

Dick Rathman qualified the Sumar Special at Indy for the 500-mile race in 1957 at a speed of 140.784 mph (MBB_512). It was owned and entered by Chapman Root, powered by a 255″ Offy and built by Kurtis-Kraft. In the race, it was driven by Johnny Parsons who was flagged home in 16th place after completing 195 laps. The 500G-2 was was new for ’57 and ran through ’61. To the right is its team car that ran as number 48 and was driven by Marshall Teague. Teague qualified in 28th spot and brought her home in seventh.

Texan’s Ken Rich and Paul Lacey sponsored this Watson built creation at Indy in 1960 that was known as the Ken-Paul Special (BHC_033). In what has to be one of the most thrilling 500’s ever, a former California track roadster driver named Jim Rathmann finally took home the marbles after three-second place finishes in previous years. The car is seen in Gasoline Alley before the race being attended to by Chickie Hiroshima, back to camera, and an ever-watchful cowboy-hatted Smokey Unick.

Ryan Hunter-Reay’s Andretti Motorsport Honda-powered Dallara is seen exiting the tech inspection area at Long Beach on a Thursday morning April 10, 2014 (JMC_4678). Ryan qualified the car on pole position and was in contention for the win until lap 55 when four cars tangled and he was eliminated from the race. He was classified as finishing in 20th place.

For the 500 mile race at Indy Ryan qualified down in 19th spot with a speed of 229.719 mph. It should be an interesting race with five former winners in the field and the return of 85-year-old Jim Neighbors singing that famous song. All we have to do now is wait for the Spectacle to begin. 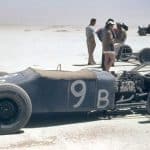 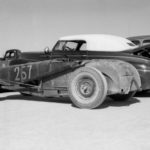 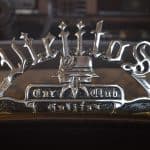 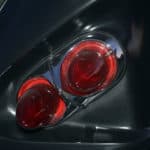 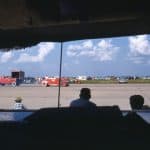 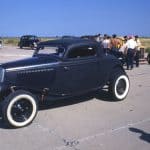 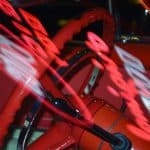 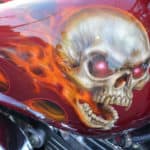 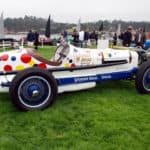 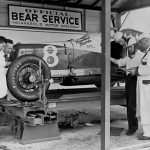 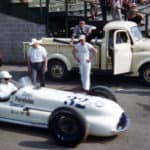 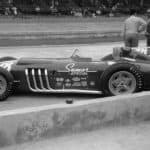 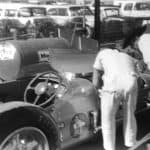 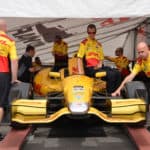 Previous Post: « The Good, the Bad and more Proboscises
Next Post: Where have all the old cars gone? »
↑ Top of Page