We delight ourselves in finding oddball stuff for you so here’s another one of those piece’s that leave us scratching our head for answers. It was a copy of an old advertisement touting a Gee-Bee Special that had run at a Muroc Timing Association meet back on June 30, 1935. We started a search by digging out our period phone book to see if we could find any mention of Gee-Bee or the Granger Brothers in it. We struck out on that one so the next thing we did was see if we had anything on 1935 races at the lakes. We found two. First, we checked on our results from the June 30, Muroc Timing Association meet that nobody seems to know about but we just happen to have entries and speeds for. We looked for a car that was powered by a De Soto and found none. We then checked our September 22 program and also came up with a nothing. Going back to the June results we looked for a 75.61 mph speed touted in the advertisement but didn’t find any.  So far were batting zero. Rechecking all the speeds listed, we found that the slowest speed of the 37 cars we counted at the meet was 75.00 mph flat and that happened to be a “Stock” Chevrolet 6 powered something. The next to slowest speed was a Chevy 4 with an Olds 3-port headed ride that ran 76.27 mph. The next two slowest were a Model A powered car with a Riley C at 77.54 mph and a Stock Ford flatmotor powered ride at 77.58 mph. The more we thought about it running 75.61 mph, the more the whole thing became a hoax.

At the same June 30, 1935, Muroc races as our Gee-Bee Special was supposed to have run at another the road showed up and ran a Model A fitted with a Riley C head. His speed that day was a respectable 95.47 mph. We found a picture of this young gun taken two years later (‘37) sitting in Danny Hogan’s Midget racer (JPC_051). His name was Sam Hanks. What’s better yet is the shot is autographed.

We just received a group of shots that were taken at the not so nice San Jose track on November 2, 1952, before the start of the San Jose 100 mile Champ Caroung fellow that was to make his name in motorsports down the road showed up and ran a Model A fitted with a Riley C head. His speed that day was a respectable 95.47 mph. We found a picture of this young gun taken two years later (‘37) sitting in Danny Hogan’s Midget racer (JPC_051). His name was Sam Hanks. What’s better yet is the shot is autographed.

We just received a group of shots that were taken at the not so nice San Jose track on November 2, 1952, before the start of the San Jose 100 mile Champ Car Race. On the right being introduced to the crown over the P.A. system and waving to the crowd is that Sam Hanks guy again in the number 14 Bardahl Special that started from the pole of the eighth row. His ride was a Kurtis-Kraft 4000 powered by an Offy. Hanks completed 99 of the 100 laps for a fifth-place finish. Outside Sam in the 16th starting spot, we see Henry Banks in his number 2 Blue Crown Spark Plug Special. The car was a Lesovsky powered by an Offy. Banks completed 23 laps of the 100 lap race and was awarded a 17th place finish after the engine started running rough.  The reason we mentioned this race as not so nice is that we lost Joe James in a crash on the front straight on the 47th lap.

We just dug out this copy of Gilmore Graphic that was published back in August 1939 for you (JMC_4531). It talks about the upcoming adventures of its super-speed jockey, John Cobb, and his twin-engined, 24 cylinder monster that put out over 2400 horses. Bet you wouldn’t have guessed but it uses Gilmore Products. You will note the front and sides of the car were a copy of Gilmore Graphic that was painted black to make sure it tripped the timing lights.

To go hand in hand with the Graphic we also dug out a postcard published by Horse Shoe Magazine Distributing Company out of Salt Lake City that shows the John Cobb’s Streamliner after he broke the World Land Speed Record on August 26, 1939. Mr. Cobb 2-wayed at an impressive 369.74 mph.

It’s only fair that the above two images work as a setup for another Cobb-s spelled land speeder by the name of Tom Cobbs out of Santa Monica, CA.  Tom ran this ’29 Ford coupe at the drags, the lakes and even Bonneville in 1951. The car started life as a Model A 5-window coupe before the top was made detachable. The rear quarters windows and fender arches were filled, the top chopped and then the whole setup slid rearward on the chassis. A 268″ flattie was inserted. Tom went out and ran 154.639 mph for first in class on the salt. He then set the class record at 155.320 mph. The car was also a terror on the drag strips. With a Merc installed still holds the class record at the now non-existing Saugus strip at 112.5 mph. Tom ran many cars for many years and is an AHRF Pioneer.

The next two shots are also just in and just scanned. MKC_010 shows Lancers member Kenny Lindley’ slick Modified at El Mirage on April 28, 1946. Under the hood was a Ford flat-motor topped with Eddie Meyer heads. Ken ran 126.76 mph for a third in class behind Caruthers-Westhoven at 129.49 mph and Karl Orr at 127.65 mph. The car later gained a tail, a new nose, an S.C.T.A. Points Championship and is still alive and well in a private collection.

MKC_006 shows the fastest Modified at the April ‘46 S.C.T.A. lakes meet in the form of the Caruthers-Westhoven ride. Under the hood of the Road Runners members, entry sits a modified Merc flattie fitted with some Tommy Thickstun’s heads. It ran 129.49 mph chasing Karl Orr’s record of 133.03 mph. Owner Doug Caruthers drove the car on the streets during WWII and later sold the car to Leroy Newmayer who turned it into a drag machine before his buddy Art Chrisman took it over to make it even more famous than it was at the time of the shot.

Another group of 24 shots we just received were shot at the first 500 held after WWII. Our unknown photographer was standing on the hot-pit wall during practice for the 1946 Spectacle when he snapped this one. Up front is the number 15 Joe Hosso entered Boxar Tool & Mfg. Co. Special that was driven in the race by Louis Tomei. Under the hood of the front-wheel drive car was one of Frank Brisco’s inline sixes that we can trace back to ’35. We can also date the Myron Stevens chassis to ’37 but the bodywork was all new for ’46. Lou qualified the car in 22nd spot but only completed 34 laps in the race before an oil line broke. He was awarded a 26th place finish. If you look real close there is an antenna on the headrest. The car was equipped with a Raytheon Radio for two way communications with the pits. Behind it is the number 18 Frank Brisco entered Maserati that wore Elgin Piston Ring markings. A 183″ straight 8 got the car scooting pretty well as it qualified in 11th spot with a speed of 121.139 mph. Driver Emil Anders brought her home for a fourth-place finish. Get a load of the straight reflections in the Maroon colored Stevens body. Not bad for a hammer, a dolly and a hand to feel for high-low spots.

Not too many days from now, there will be a little gathering of rides at a place called the Pomona Fairplex. This gathering will feature some of the best rides on the planet and goes by the name of the Grand National Roadster Show, or Mr. Grand Daddy of them all. We don’t need any excuses to show you one of our favorites from the ‘12 show (JMC_3568), it’s just another masterpiece constructed by Roy Brizio and Co.

To add some frosting to the show how about a look at a show program that’s only 50 years old (RBC_064). We present the 1964 Souvenir Program Cover courtesy of Mr. Brizio naturally.

Here’s a little Stevens trivia. One of my favorite vehicles is the Willys Jeep Station Wagon. It just so happened that Brooks Stevens designed it. One of his constraints when designing the car right after WWII was that he had to use presses to stamp the body on that were originally used for stamping out refrigerator skins, that meant the max depth of a draw could only be 6”. He did a fantastic job because outside of the VW Bug this was probably the longest manufactured body design ever.

Last but not least is another lost to the world hot rod scheme that didn’t make it. How about an engine swap kit from M-J Conversions in 1953. The folks involved were Marvin Graham, Maynard Parker, and our own Julian Doty. They were taking Willy’s Station Wagon’s and Jeepster’s and dumping in Ford and Merc flatties. The attached shot is one from an 18 photo leather bound portfolio on how to do a conversion (DOT_961). Is that carb off a Lincoln? How many conversions did they do? 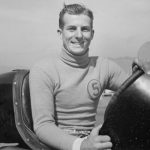 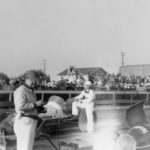 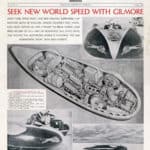 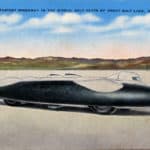 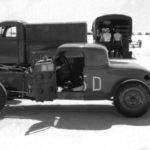 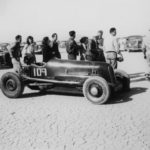 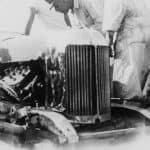 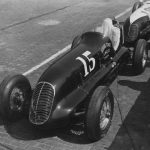 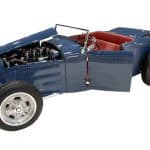 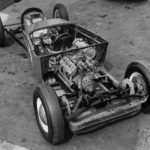 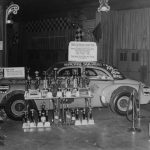 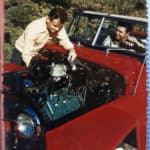