I don’t know how many of you remember the old Tennessee Ernie Ford song “Sixteen Tons” from the mid-‘50’s? If you do, you’ll kinda get the idea of what’s been going on around here for a while.

The song was actually penned by Merle Travis back in ‘46 for you history buffs but that’s another story. For those who’ve never heard the chorus before it goes something like this—

You load sixteen tons, what do you get

Another day older and deeper in debt

I owe my soul to the company store

You scan hundreds of pictures, what do you get

Another day older and the pile’s deeper yet

This is a roundabout way of saying thanks to everyone for donating that 100-pound ball that’s chained to my ankle in the form of the coolest pictures on the planet and forcing me to spend countless hours toiling over and then posting them for your viewing pleasure. By the way, does anyone have Saint Peter’s cell phone number so that we might be able to negotiate a deal on making days longer than 24 hours?

Enough of the tom-foolery let’s look at some of this week’s goodies.

DBC_950 started out as another one of those way-too-red color slides that said make me black and white to save me. The shot was taken at El Mirage back on November 6, 1977, and we see the guest entry of David Koskela. His number 191 Class A Modified Roadster ran 208.33 mph against the 233.76 mph record.

DBC_956 is another one of those too red guys but this one deserved a little work to see what we could save in the way of color. Paul “Punky” Grosso’s ’30’s era sprint car is taking shape in this May 1978 photograph. A road trip to Arizona in ‘77 resulted in picking up a bunch of old used-up race car parts and the start of this build. Much of the work was done by master fabricator Wayne Ewing who brought the junk back to life. It’s being put together in a place called the “Bunker” that’s located on the north side of the Burbank airport and has its own unique history.

Besides still images, we also have old motion pictures digitized for documentary use (like our offering Slingshot for example). Don Read had sent us some footage from the Paradise Mesa drags and Ontario Motor Speedway and we picked it up, reviewed it and return it to him during the week. As luck would have another package from our friend Randy Chenowth just showed up Thursday with five rolls of soon to be discovered where race footage and that’s now in the works.

Our pal, Terry Baldwin, was down doing the same to some of his old films and brought along a small piece of 16 mm film about 2” long that normally would end up in the trash.TBC_085A shows some of the clips frames after we had cleaned and scanned it. The frames on the film are about 3/8” wide in real life and we re-scanned it to about 15” wide in TBC_085 to show you that we can save almost anything. We sharpened it up as best we could and retouched out a scratch from a long-ago used projector. The images were taken back in 1947 at an outdoor car show. Wally Henrich was the owner of the Ralph Schenck then Schenck-Harstad Streamliner and you can see a For Sale sign taped to the side of the car. Bob Arner later purchased it and made the cover of Hot Rod in July 1950 with it.

While were on 1947 images here one that we just scanned and color corrected (DCC_159). This Don Cox shot was taken at either the September 2nd or October 19th, 1947 lakes meet at El Mirage. Up front we see Gophers member Richard McClung in the former and now modified Conrad Weidel machine. The high exhaust pipes say it has a 1938 Cad V8 under the hood that ran milled heads, a special intake manifold, a Windfield cam, and stock ignition. The number 59 car on the left is the Dick Kraft-Stan Betz Class B Streamliner flying Lancers colors. Under the hood was a ’32 Ford flathead with Eddie Meyer heads, Earl Evans intake, Clay Smith cam and Chuck Potvin ignition. Behind it we can make out the number 482  on a ’27 body that we identified as Robert Dowwell’s. The Dolphins member ran a ’37 Ford flattie fitted with modified For heads, an Edelbrock intake, a Kenny Harmon cam and a stock ignition. Number 500 on the right is the Class C Roadster of Dolphins member Chuck Daigh. Chuck in the tan shirt is seen playing with its ’41 Merc with Navarro heads and intake, Smith cam and Spalding ignition.

We are always digging for the unusual and our next image from a newspaper should fit that bill perfectly (JMC_4819). We see Andy Conze at Muroc Dry Lake on June 30, 1935, with his three-year-old 1932 Ford Roadster after just posting the fastest almost stock four-banger speed. He turned an amazing for the day 84.50 mph. Additional info in the clipping says that the fastest man of the 20 cars entered that day was Judson Mills with a Cragar headed roadster at 109.75 mph. A soon to be famous roundy-round driver was at Muroc racing the same day as Andy. His name was Sam Hanks and he ran 95.74 mph in his Ford A. After WWII Andy, his brother Vince and C. B. Phillips opened a machine shop and became famous for their race car parts that included quick-change rear ends. Andy was born on June 1, 1912, and passed away on July 7, 2004.

While looking at Andy’s car, I couldn’t help but wonder what it would have been like to be at Muroc with a camera that had some yet to be invented color film in it. JMC_4824 shows a Packard from an Ad printed in the July 30, 1927 issue of The Literary Digest that would of looked great covered with Muroc talk. Maybe a yet to be invented technology will someday let us be able to read the grey tones in old black and white shot and turn them to into color. I can’t wait.

To spice things up a little we grabbed some old faded color prints taken at Bonneville in 1974 to see what we could do with them (DOT_958). All we can say is the color is baddddd, plus the prints had a texture to them that left us with white dots everywhere, so for now they get to be black and whites. DOT_959 is our save job. The strange looking rig with the shovel nose started life as a Corvair station wagon before the team of Keck-Smeltzer-Oakies Auto Parts out of San Louis Obispo got their hands on it. It’s seen at Bonneville in 1974. The up-front engine bay housed a 300″ Chevy. It was painted white at the time of this shot. Later horizontal red stripes were painted on the front and from the rear door back it was all blue with white stars to make it look like an American Flag. Somewhere we’ve seen a picture of it after it crashed. Ouch.

From the salt lets go back to the dirt but this time to Mexico during the Baja 1000 in November 1972 (GCC_304). We see Bob Ferro shoeing the Roy Woods Racing buggy sponsored by Carling Black Label Beer. If you think trying to identify lakes rides is tough, try figuring out a couple hundred of these rides scootin across the desert all covered in dust. It’s hair pulling time. 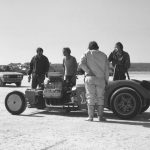 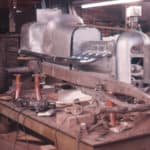 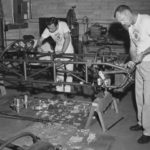 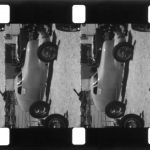 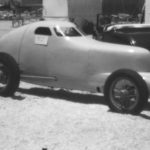 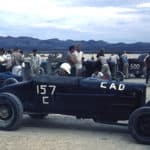 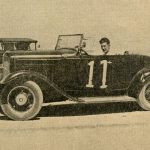 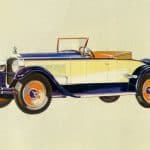 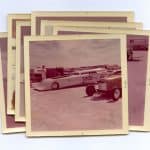 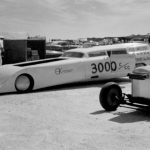 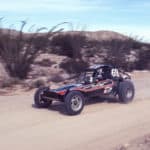 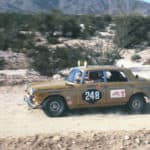 Previous Post: « Close but No Cigar
Next Post: I Could Have Been in Perris »
↑ Top of Page