Ever since I could remember we’ve always celebrated this special day by honoring our flag, having a parade and celebrating with fireworks. Along with this tradition, we always reinforce it with the saying ”As American as Apple Pie and Baseball”. At this time I would like to make a little change to this. We can trace Apple Pie back to 1381 and stick and ball games back to ancient Egypt. Both of these dates are way before 1776 so it’s about time we find a more suitable replacement with a uniquely American term called a Hot Rod. I like the sound of ”As American as a Hot Rod”.

To do a little reinforcement to this statement one only has to make a visit to your local post office and check out the latest USPS issue featuring none other than our beloved Hot Rod (JMC_5042). I’ll be in line tomorrow morning to buy as many of these as I can afford, will you? Happy 4th of July!

The last couple of weeks we’ve been posting pix from the Gary Hartsock Collection featuring rides shot at the ‘66 Grand National Roadster Show. Doug Rasmussen, an AHRF contributor from Omaha, Nebraska, called and asked if we were interested in some more? Heck Yes! Doug was in the Air Force and stationed in California at the time so he got to go to to the GNRS from ‘66 to ‘70. We call that way cool and were now burning up the scanner with his contribution.

Let’s have a look at a couple of cool rides from the ‘68 show. First up is Mr. Dragster Chassis builder extraordinaire Kent Fuller’s “Volksrod” Roadster Pickup. The Rod & Custom Cover and Feature car ran on a 86″ Chrome moly chassis of Kent’s own design as was the 3″ dropped front axle. The body is a ’23 T and the steering was from a Triumph. Out back was a ’58 Porsche Carrera mill mated to a VW transaxle. Any bets on whether it could pull a wheelie?

Next up is Tom Mierkey’s ’40 Ford also seen at the ‘68 GNRS (DRC_095). The car was entered in the Revamped Rod Coupe class and featured a 322″ Buick Nailhead for power. The interior is Black Diamond tuft and the windows are t tinted. The dash is silver flake and the exterior is Silver Sungleam acrylic lacquer with subtle pinstriping. Looks like he’s received some loot already in the form of multiple trophies.

Here’s a cool shot Doug took before he met up with Uncle Sam (DRC_036). Take one 1936 Chevy coupe and let’s go racin. We like the way the fenders have been cut and the missing rear decklid has been replaced with a home-built one. Best of all is the slogan painted on it, “Sleepy Honk Hotn I’ll Move Over”. Photographed at Omaha Dragway in July 1961. We call this a real American Hot Rod.

As a kid, one use to look through every magazine at the local drugstore and only buy the ones he could afford. Years later it is ok now I can almost afford the oldies so here’s one we picked up last weekend. It’s Volume 7, Number 12 of Motor Life Magazine published by Quinn Publishing (JMC_5033). We got this issue because it was chocked full of custom car ideas not to mention the color shots on the cover. That’s Ray Cress’ ‘56 Merc on the top, Gene Winfield’s 58 Olds and Jim Butler’s ‘55 Stude in the middle and Helen Avila’s ‘56 Chevy and Bob Metz’s ‘55 Buick on the bottom.

One of the great things about ‘50’s customs was that they were always looking to the future in the styling department. Along with the real things the mags were always full of push the envelope drawings to inspire us budding car drawers. This Stan Mott drawing appeared in the May 1958 issue of Motor Life in a story on Ford Motor Company’s styling ideas for 1959 (JMC_5028). This is a ’58 Bird that Stan added the La Galaxie Show Car styling queueThe mods look better than the original.

We present Volume 1, Number 2 issue of Car Speed and Style from January 1958 (JMC_5027). On the cover is Tony Marchesi’s 1946 Ford Ragtop. Tony was a member of the Valley Stream, New York Pacers Car Club. Under the Metalic Orchid lacquered hood with 82 louvers lurks a flat motor fitted with Edelbrock heads and intake, 3/4 race cam, Harmon & Collins ignition and dual 97’s. The frontront’s to. The mods look better than the original.

The sands of Oramond-Daytona beach on April 22, 1928, in this postcard on the way to establishing the World Land Speed Record at 207.552 mph. The beast was powered by three V-12 Liberty Aircraft engines displacing a total of almost 81 Litres (about 5,022 cubic inches), one in front, two in the rear that all fed the rear axle. On March 12, 1929, Lee Bible would die in the car while trying to beat the new Segrave record of 231.446 mph.

Once a month on the first Saturday a group of us whackos get together to eat breakfast and bench race. David Scully who organizes things at the breakfast and I had talked previously about his going to the Paradise Mesa drags in the early ’50s as a kid. Since we have a lot of shots from those times I printed a bunch out for him as he said he could possibly help us identify some of the players. While doing so I ran across this El Mirage shot mixed in with the drag stuff (DCC_561). Looks like the guest entries are about to run at the April 28, 1946 lake meet at El Mirage. Don’t have bumper was borrowed from a ’56 Chevy. Better yet this issue had a story on the 4th Annual World Series of Drag Racing put on by the NHRA hated Automobile Timing Association of America out of Illinois. 20,000 folks showed up to see the Cook & Bedwell Chrysler powered railjob run 163.63 mph. As a side note, we just got another package from Jere Sheehan down Florida way and included in his latest treasures was a letter from the Automobile Timing Association of America dated August 13, 1954. Inside was info on the ATAA  including an entry blank, rules, etc for the First World Series of Drag Racing event to be held on October 1-4, 1954, or about a year before the first NHRA Nationals in Great Bend. More to come on the rivalry down the road.

At the Sidewinders Club Meeting Tuesday night S.C.T.A. Racing News photographer Stuart Harnick passed on to us a to-die-for postcard Postcard from Scott Bloom of Woodland Hills Camera (we’ve got the coolest friends everywhere) (SHC_005). We see the White Triplex zooming down tta clue as to the Deuce but number 305 was listed as Fenton Morrill. His speed was 114.64 mph. Note the Morrill body started life as a ‘27 Phaeton before the back half was discarded and how big the gas tank was that indicates it was probably street driven. We also like where the ‘39 Teardrop lites were hung.

After the breakfast, it was head over to the bookstore to hunt for anything new or old that we couldn’t live without. Returning empty handed for a change it was doing some scanning before heading out again for a local Saturday Night car show. A slightly used copy of the July 1, 1936 issue of Coast Auto Racing got scanned and cleaned up for you (JMC_5039). I picked this cover for you not so much for the great shot of Gordon Cleveland and Gil Guthrie having a little contact, or the content that covered everything that had a motor in it, but because of the location, a running track located in what we now call the Peoples Republic of Santa Monica, California. It’s hard to believe that a city that gave us the likes of the Low Flyers, the shops of Stu Hilborn, Jack Engle and the Granatelli’s, and America’s First Formula 1 World Champion, Phil Hill has degenerated into what it has today, anti anything except what is GREEN. Pretty sad!

Shifting gears this morning it was head up to La Crescenta-Montrose, the spiritual home of Mr. Hot Rod himself, Ed Winfield, for the 13th Annual Old Town Montrose Car Show. There were a couple of 100 rides on display not counting some outstanding Cackle cars. The one that did it for me was the Samurai, What a Jewell (JMC_5040). One that couldn’t start because it needed to be pushed like in the old days was Pat Ganahl’s Sonny Balcaen built Ike Iacona GMC powered railjob that graced the cover of the January ‘59 issue of Hot Rod. Wow! Pat was there with his new book “Hot Rod Gallery” that you could of gotten him to autograph. It’s loaded with tons of great photos and is a must for your library. 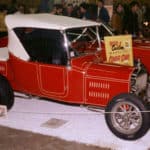 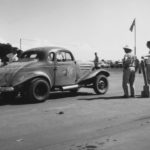 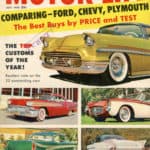 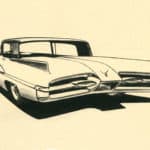 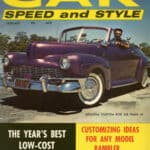 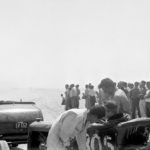 Previous Post: « Out and About
Next Post: We never stop learning from the old stuff »
↑ Top of Page