This week we’ve been busy playing with some old color negs shot at the Grand National Roadster Show back in 1968 courtesy of Doug Rasmussen out of Omaha, Nebraska. We’ve been so used to seeing shots in black and white that it’s exciting to see the cars in living color. Doug kept the original 3 1/2” x 3 1/2” prints and they are in perfect shape except for the normal Kodak faded colors. What’s even rarer is he also kept the color negatives in likewise almost perfect shape that most of the time got tossed. We’re in likewise almost perfect shape that most of the time got tossed. First up is the Tim Gill entered ’27 T roadster (DRC_097). The body has been channeled over a modified T chassis that runs a ’34 spring forward front axle setup that’s visited the chrome shop as has the rest of the running gear. A supercharged ’53 Cad mates to a ’37 Ford trans. Note the firewall as well as the interior sports black tuck and roll upholstery.

We were lucky as Roy Brizio had lent us the ‘68 Program for doing our best to getting the color as close to original as we can.

Let’s look at a couple. First up is the Tim Gill entered ’27 T roadster (DRC_097). The body has been channeled over a modified T chassis that runs a ’34 spring forward front axle setup that’s visited the chrome shop as has the rest of the running gear. A supercharged ’53 Cad mates to a ’37 Ford trans. Note the firewall as well as the interior sports black tuck and roll upholstery.

We were lucky as Roy Brizio had lent us the ‘68 Program for scanning so we could use it as a reference in figuring out who the show’s players were. We’ve found it’s also normal to have car shots that we can’t find listed in the programs like our next shot (DRC_091). Sometimes there is a showcard with info on it (like in this case) and sometimes there isn’t. According to the info card this supercharged “Fire Truck”, Engine No. 13, is the work of Chuck Miller. To bad we can’t make out anything else.

We received a call Tuesday that said we better hot-foot it down to Isky’s for the Wednesday Lunch. The reason was Ed was celebrating his 93rd Birthday. The “Camfather” is like the Energizer Bunny in that he just keeps going and going as seen in this shot of him acknowledging a poster he just received from “Gentleman” Joe Schubeck. You’re the best, Ed!

We couldn’t resist scanning this shot out of the October 1959 issue of Tire Marks taken at the Pel-State Drag Strip in Opelousas, Louisiana (JSC_076). Up front, we see the new machine of the Everettes, Granger and Neal. It started out as a ’34 Ford and is powered by a ’57 Chevy V8. The car won it’s class the first time out. Driver Ernest Everettes copped the Top Time Trophy with a speed of 124.48 mph in 11.31 seconds, the A Comp Coupe class trophy by beating Jerry Chaudoir (seen in the far lane) and the Top Eliminator Trophy at 123.62 mph in 11.58 seconds. We call that a successful debut and one reason why we like the old days when some wild looking machines like this were the norm.

One of the coolest decals ever is the Giovannoni Cams masterpiece with a hot babe riding the bumpstick (JSC_077). It’s an original with the base circle being 4 3/8″ and was just another surprise from Jere.

If the week wasn’t dull enough already we ventured over to Bob’s Big Boy on Friday night to see if our pal Harold Johansen might show up. Harold goes back to racing at El Mirage in ‘47. He’s also the only guy I know that has starter two S.C.T.A. clubs, the Roadmasters before the year 1950 was even thought of and the still in existence Super Fours. When you need info on things that happened decades ago going to the source is best and Harold in the man in this case. After a good chat, we sauntered over to look at a clean little “T” Modified (JMC_5044). This one started out as 1919 vintage with a narrowed body (4″) and placed on a z’ed “T” frame. It runs Model B power with a Thomas cylinder head and sports two 97’s. Out back is a ’40 Ford rear end fitted with a Halibrand quickie. The steering is a Schroeder unit and It sports a T5 tranny. The owner said he picked up the front wheels about 30 years ago and spent the last four building it. We call it Sweet!

It’s fun to hang around till the lights get low and the orange Neons come on and give you some good reflections in shiny paint. JMC_5045 shows the taillight of a new Mustang that the neon matched perfectly. Too bad the flash blew out the reflection but it still looks cool.

This evening (Sunday) there was a little party over at the former Tommy Sparks residence where fellow AHRFer David Steele now resides. It was to be a Cars and Guitars type of party as David makes his living doing the guitar thing.

Cool rides appeared out of nowhere to parked everywhere. Tom Branch and his wife and little one showed in this slick looking Deuce Sedan lowered over its chassis and sporting a rad chop (JMC_5047). Since everybody was sucking on beers we were going to call the bar up the driveway the Long Branch Saloon as we had plenty of Miss. Kitty’s in attendance (Grrrr) but no James Arness (you know, Matt Dillon, Gunsmoke, old time TV show actor!). In honor of Tom’s blue ride, we just renamed the bar the Tom Branch Saloon for kicks.

Lurking against the wall of the Tommy Sparks Garage (about 20 feet from the Tom Branch Saloon that was up the driveway) we spotted a blue plate that said Hot-Rod Motor Oil by Francisco Labs.  We almost missed this old trophy to its right with a Shoebox Ford on top. A close examination revealed that this was Tommy Ivo’s old trophy from Saugus Drag Strip where he was running his then new ’55 Buick Century (JMC_5048). Looks like “TV” ran a quick 85.74 mph on February 13. 1955 in his stocker.

When I got home it was open up the Ivo Collection of pictures and find the shot I remember having of Tom’s Red Buick (now you know why his early dragsters were always red). TIC_027 shows Ivo’s ’55 Buick Century parked in his parents’ driveway sporting three go fast trophies. It took less than a nano-second to spot the one on the left that just happens to be the same one we found in Mr. Sparks garage 59 years later (tonight).

It’s only fitting that our last shot for this story shows a real garage band playing in a real hot rod garage. Our host and AHRFer David Steele is seen on the left pickin some great riffs for the gathered. To his left unseen are a ’29 Roadster Pickup, a ’29 Roadster and a Deuce Roadster. Behind him is a 2-seater Bird, a Stingray and a “Ride Sally Ride” Stang that went perfectly with the music.

What a good way to end the day. 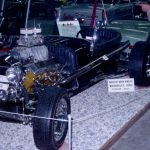 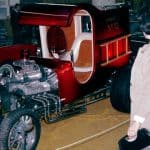 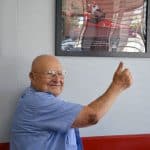 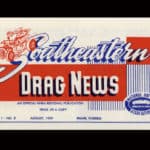 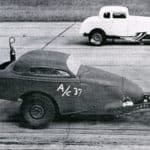 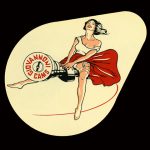 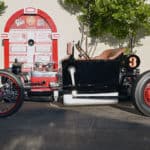 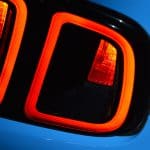 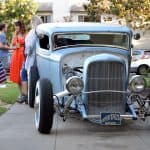 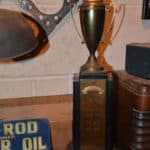 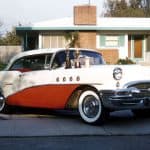 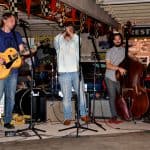