This week we’ve been running around like a chicken with our head cut off and have somehow managed to put ten pounds of ? in our five-pound bag.

Last week we showed you some early Bay Area Roadsters that were just a small sampling from an old scrapbook courtesy of our pal Chet Knox. Let’s jump right to a scan of a whole page from this scrapbook to show you what we’ve unearthed in the way of real lost history. CKC_1913 is but one of 72 pages in the scrapbook mostly taken in the San Francisco Bay Area. This stuff is priceless. We’ve scanned all the scrapbook pages like this and then re-scanned the shots individually at a higher resolution.

Did we mention that this wasn’t the only scrapbook? No. It’s a mind blower to find one, but we actually found three to share with you plus six more filled with newspaper clippings.

Most of the time we can’t attribute a name to the original glue-er-upper’s of these historical finds but sometimes we luck out. This next shot HAI_010 was in a book that the owner actually carved his name on the cover with, using a knife. Thank you, John S. Haigler. We hope someday we might even find out something about you. We see one Sam Arena astride a Harley-Davidson about ready to climb an unknown hill. In the group of around fifty shots, we’ve found other names that need to be researched along with some clues like ‘40 San Louis Obispo and pre-war San Fernando Valley.

This weekend was spent at the first S.C.T.A. meet at El Mirage but first, let’s show you some more of what we’ve been up to the last few months.

There is an event that us land speed racer local’s call the Gas-Up but its formal name is the Dry Lakes Racing e see Ed Haddad who became a real player after WWII in the Southern California Midget phenomenon. On the right, we see Herk Edwards who we first discovered a few years back as the author of a book called “The Bobby, The Babe and Me” published back in 1994. In the lower left, we see Legion Ascot sensation Al Gordon. in the bottom right is California racer Bayless Levrett. This stuff is priceless. We’ve scanned all the scrapbook pages like this and then re-scanned the shots individually at a higher resolution. Hall of Fame. The 2015 edition was the 21st held. There are different categories but the one we like best is for Historical Vehicles. Sometimes you luck out and get a barn find that’s pretty much all there and in one piece while other times all you find is a bunch of used up parts in the car’s umpteenth iteration. Our next shot (ENC_001) shows the results of much unseen hard work and cubic dollars that has brought the 1948 S.C.T.A. Championship winning Spurgin-Giovanine car back to life. The guy who made it all happen and is flashing a big smile is Dentist and vintage car nut Ernie Nagamatsu. Ernie rescued what was left of the original car (posing as a rear-engined modified roadster drag car powered by an inline Chevy-6) and spent untold hours doing research before having the car restored back to is early 1948 form (we can brag a little, as we-we helped Ernie fill in some of the car’s lost history) and yours truly even got to pose with the car and the man himself. It’s people eping our hot rod history alive.like Ernie who should be applauded for keeping our hot rod history alive.

We couldn’t resist showing you a shot of the eventual March 1949 Hot Rod Magazine cover car snapped at El Mirage that was Ernie’s inspiration (KKC_051). Chuck Spurgin, Bob Giovanine and a 1925 Chevrolet 4-banger running an Olds three-port head were the heroes of the day in ’48 because they spanked the Ford-powered cars and set a new record at every meet on their way to the Championship.

Our bud Dan Warner is the President of the Bonneville 200 MPH Club and contacted Ed Justice, Junior of Justice Brothers Car Care Products earlier this year. The results were the coolest venue ever for  2-Club’s annual party. Over the years Ed has put together one of the best collections of unique rides on the planet and this nose shot of an Ed Roth tribute car is but just one of them (JMC_5468).

Not many people know the Justice Brothers were real movers and shakers in the L.A. car world right after WWII. They were on the ground floor of the midget race car phenom and worked at Kurtis-Kraft. As Western Distributors, they put Wynn’s Friction Proofing on the map and on the nose of Johnny Parson’s 1950 Indy winner. It is only natural the heart of the Justice Brother’s Collection consists of Midget racers. One of the coolest ever is seen in this color shot (JMC_5468). It was commissioned before the war by one Charlie Allen and is attributed to one Frank Kurtis.

Next up we see a close-up of a 267″ ’41 Ford V8 equipped with Evans heads (CKI_096). It’s mounted in a Ford Model A that’s nothing special until you realize it was co-entered and shoed by one of the most famous drivers in the world before he became famous. We dug out a 1950 Bonneville Speedweek Program. A Class C Modified Roadster running as number 549 was the entry we were looking for. Seems the 17 year old driver with forged parental consent ran a speed of 130.430 mph that was good for a 13th in class. Less than a decade later this same person had progressed from hot rods Phil Lyon. and could be found driving for some old dude in Europe called Enzo Ferrari. Later still there was a groundswell of fans that thought he was cool enough to be the President of the United States.

If you haven’t figured it out yet our next shot shows the same shoe driving one of the cars he built at Riverside International Raceway in 1969. On Thursday of this week, I had the fortune of having lunch with Mr. Dan Gurney. A special thanks to Chuck Kirkpatrick and Phil Lyon for saving some 65-year-old Bonneville photos and Van B. for arranging the visit.

On Friday it was off to El Mirage for the first S.C.T.A. meet of the year. It takes a day or so to get all the speeds double and triple checked so here are a few shots from the weekend to tide you over without the details.

Alan Fogliadini in his official shirt is about to start the inspection process of Les Leggitt’s Studie Competition Coupe (JMC_5462). Les, on the far left, first ran the car at the last meet of the 2014 season and his years of wrenching resulted in the car setting a record out of the box. If you have some extra bucks I’m sure Les could fix you up with some space for some of your decal’s on the car’s air dam. His goal for the car is to make it the first door-slammer to break the 300 mph barrier on the dirt.

Fast Freddie Dannenfelzer has been hard at work on a Streamliner for the last year or so and the car is now basically finished. He showed at the first 2015 meet with its power plant nestled into his old Lakester to do some test and tune runs (JMC_5463). At the end of the meet he went home with the info he was after. Behind Fred’s ride is Ed Finn’s Lakester that would go on to set a record at the meet.

Fred Blanchard brought his Lakester to the season’s first race to get some laps on the car (JMC_5464). The big-block Chevy used to power the car is fitted with his bud’s (Nick Arias) set of cylinder heads that Fred has massaged. Fred was pleased with the results gathered from the two days of racing on the dirt. No how sano the car is.

This wild Diesel powered rig showed up at El Mirage for the June 2015 S.C.T.A. races (JMC_5465). An old GMC cab-over body was modified to take a Suburban back half of the same vintage. It was then fitted on a new chassis to give us a real retro looking ride. Dig the Cad bumperettes up front. After the trailer was detached the rig served as a push vehicle. We call it Cool.

If one goes back to 1960 and checks the Bonneville results you will find one Dick Beith as the entrant of a Volkswagen Bug that ended up finishing first in Class F Touring Sport with a speed of 73.34 mph. He would end up the week with a new record for the class with a speed of 77.057 mph. For those of you that are really with it, Dick was also in an ABC Television production that covered the happenings on the salt that year. Fast forward to the present and you’ll find that the boys who run the USFRA meet at Bonneville in September have a special class just for 36 hp powered Volkswagens. Seems Mrrrr. Beith couldn’t resist the challenge and built up this wild looking Bug to run in the class (JMC_5466). He showed up at El Mirage for the June ‘15 meet (yesterday) with his creation only to discover that his ride didn’t fit in any of the S.C.T.A. Classes and couldn’t pass the S.C.T.A.’s rigid safety requirements. Bummer because the car really looks cool.

We captured the McLeish Brother’s wild looking Streamlined Motorcycle Sidecar Classed ride on Saturday morning before racing began (JMC_5467). The car can be transformed into a Lakester by losing the sidecar and adding a front and rear axle. This is what we call thinking way out of the box and a specialty of lakes racers.

We ran into Danny Thompson checking out the cars in the Staging Lanes at El Mirage and just had to snap a pix of him for you (JMC_5470). Like the rest of us, he’s waiting for the waters to subside up at Bonneville so he can get back to setting a 400 mph plus record with his Challenger II Streamliner.

While trying to find the elusive perfect shot at El Mirage I ran into pal Bob Barmore and his significant other Annette this weekend and we caught up with some bench racing. Bob is also an AHRF contributor and laid a couple of envelopes full of goodies on us. It’s only natural for us to share it with you so here’s a scan of the cover a Fuel Injection Engineering Brochure circa ’51 when Stu Hilborn’s company was based in Culver City on Hannum Avenue (BBC_007). 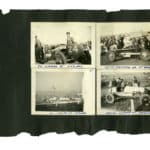 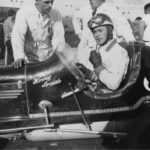 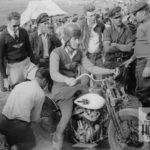 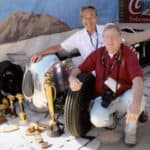 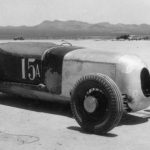 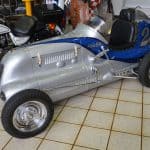 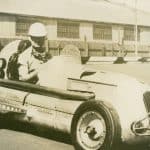 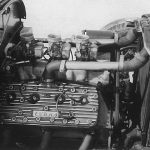 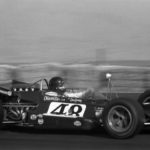 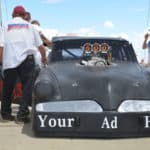 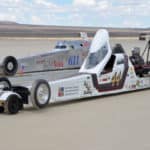 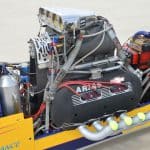 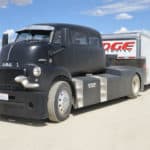 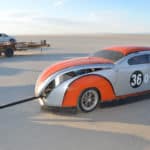 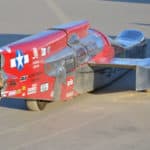 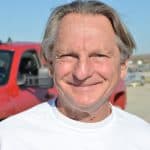 Previous Post: « The troops at the AHRF went on a road trip this weekend
Next Post: Variety is the Spice of Life »
↑ Top of Page