After a lengthy search, we finally found some results from the Hot Rod Reunion so we could identify some of the players. It’s really easy to just walk around and shoot pictures but when we get home and start going through the images we always kick ourselves for not getting more info on our subjects.

example of our dilemma is our next shot of the Candies & Hughes painted Funnycar (JMC_4469). We shot a whole sequence of the car from before the body was removed until the bare chassis was rolled under its awning. We lucked out this time because in one of the shots we spotted the number 400 by the rear window. There were 33 potential qualifiers in this group of cars for the available 16 finalists and this car didn’t make the cut. That meant the car wasn’t listed in the final results so we were at a loss as to who the driver was. By luck and a lot of searching we found a listing of all the cars and found that one Mike Halstead from Fontana was the shoe of this ’70 Plymouth Barracuda bo.died car.  We also learned it sported a blown 468″ BAE for power and that Mike ran 228 mph in 6.012 seconds for 26 fastest of the 33 potential qualifiers.

Our next shot was in the same boat (JMC_4455). Everybody knows the Jungle Jim paint job but who pays attention to who’s driving it these days. Shame on us. We get up close with the John Smith driven ’74 Vega flying the colors of one of the Jungle man’s famous funnycar. John, from Anderson South Carolina, came to the 2013 HRR with his 498″ BAE powered ride to see what he could do to get into the 16 car field. John made a run of 243.68 mph in 5.925 seconds but didn’t make the show due to mechanical problems.

Now, all we need is a year or so to go through the 600 shots waiting to be id’d from that weekend.

Space and time only let us show you a little bit of the cool stuff we’ve managed to save over the years. This week we did a couple of combo sitting all 375 of them ID’ed with some help by some players of the day. Note the Jungle man’s flopper in the top row.

Let’s look at JMC_4480. We spent the early part of the week scanning over 100 of these shots from the late ’20s to the early ’50s. We picked every 4th shot to show you a little mix. There are lots of famous folks in these photos. The first row shows Shorty Cantlon, Chet Gardner, Al Gordon, Francis Quinn, and Fred Winnai. The second row starts at the dirt track in Culver City across the street from MGMStudio. The CC board track was later built at the same location. Then there’s Bayless Levrant, Kelly Petillo and Rex Mays. Fred Agabashian is in the next row in a midget. The next row shows former dry lakes racer Bud Rose left-rear wheeless. The last row we see Babe Stapp, famous AAA  Flagman Pop Wagner and Ernie Triplett.

In my spare time watching F1 and Indy race tapes, and going through some our recent old newspapers we just got, we ran across a timely article written by Sidney Senter, Louisso a thorough ID of the individual shots.

Let’s start with JMC_4481 that shows 13 B&W’s from ‘46 and 12 color shots taken in ‘76 from our pal Doty’s Collection. The B&W’s were from the same roll and span two different lakes meets with a motorcycle race in between. We have some players in the group from off the top of our head. Phil Remington and Jim Lindsley’s cars are in the first row and Tony Capana and Stu Hilborn’s are in the second. The color stuff are straight scans to show you that we get to spend some time making them right again. In the middle row we see Charles Dimmitt’s custom Zepher and Seth Hammond’s lakester with a Pinto in it. In the fourth row we have heavy-hitter boys Al Teague and Ermie Immerso. In the last row is Ken Walkey’s Datsun powered Lakester and Fred Lobello’s tank. Both these cars are still running 37 years later.

JMC_4482 shows some color corrected shots from the A.B. Shuman collection taken on the Right Coast in the ’50s and ’60s. We’re working on the Shuman collection taken on  Senter of Ansen Automotive fame’s brother (JMC_4484) (As a side note, Sid was the track doctor for most of the Los Angeles Bull Rings). Lew was writing regular columns before the war and must have been out of pocket for this one published on September 7, 1939. It gives a good overview of a race held at Southgate’s Southern Ascot. The race winner just happened to be old dry lakes racer Bud Rose. One of the drivers mentioned went on to become Treasurer of the S.C.T.A., his name was Mel Leighton. Another famous shoe from the era mentioned was Rajo Jack. Cool.

What’s even cooler is one of our unknown shots in the 4480 combo had a driver by the name of Bud Ricco written on the frame rail that was mentioned in the Senter clipping. Here’s a picture of the car that was most likely the victim of the clipping’s mentioned crash (DBC_867). It was also the first roadster that we know of that put the engine behind the driver. Young Meyer ran 121.95 mph, 118.89mph, 119.37 mph and 117.95mph. The only guy close to him that day was one Vic Edelbrock at 119.68 mph.

What’s weird is while paging through another old newspaper from November 16, 1939 we found a Eddie Meyer Ad that shows one of his intake setups that was most likely used on the car above (JMC_4483). We did a little searching and found the Meyer car set a record at the July 23rd S.C.T.A. races at 111.24 mph. We also have the car at Harper with Bud behind the wheel on September 10th, running 113.06 mph and 114.64 mph and setting an official record at 114.285 mph after running another one way on a qualifying lap at 114.79 mph. Looks like the boys did a little number fudging in the ad. We don’t have the Meyer car running at the October meet but Howie McKessen had the fastest roadster speed at 110.97 mph and guess what, it was Meyer equipped.

You’ve seen AJC-009 before but not in it’s retouched state. This May 19, 1940 shot shows the historical entry of Eddie “Bud” Meyer Junior. The Model-A had a Ford flattie running his and his pop’s hop up parts on it.eep around here our friend and AHRF contributor Randy Chenowth hooked us up with his friends, Tom and Anita Zelesky. They just happened to have a binder full of negs by old Cajon Speedway track photographer Marty Wells and guess what, we now have it for scanning. I’ve included three scans from it to show yet another form of hot rodding. If you don’t think these cars count, you may want to make a note that Ron Main started with this kind of ride at Saugus before he discovered dry lakes racing. MWC_001 shows two unknown’s dicing, MCW_002 shows an air conditioned and slightly tattered Camero and MWC_003 shows what we call an owie.

This coming weekend is the last S.C.T.A. meet of the year and it’s a two-dayer. Let’s hope it stays dry. 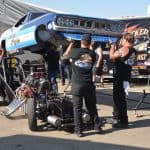 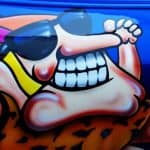 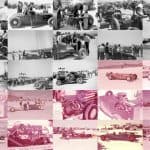 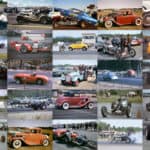 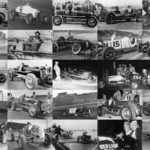 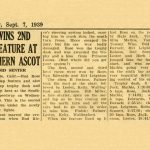 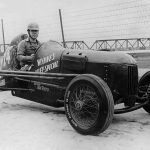 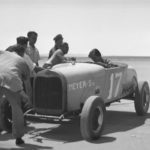 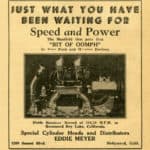 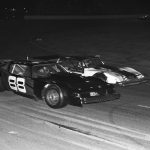 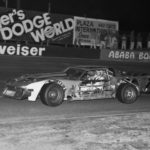 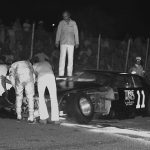 Previous Post: « Old Newspapers To The Rescue
Next Post: This Has Been One Hectic Week »
↑ Top of Page