This last year we’ve gotten literally thousands of new shots thanks to our friends at large and who visit the site regularly. We continue to say “Thank You” in making our task of documenting hot rod history a little easier.

A task we talk about from time to time is trying to figure out who are the cars and players in all the great shots that come across our desks. Like most mortals, our brains are overloaded with trying to figure out the picture’s content and finding a source of information on what we don’t know. Putting things into some kind of perspective tells us that things that happened after 1950 are a lot easier to find than what took place in say 1928, 1933 or 1942 in the wacky car world we live in.

With that said, for the past few months we’ve spent lots of time, first trying to figure out in what form and where the information we need might be and then going out and trying to find it.

Let’s have a look at one of our new scan DBC_834. A year or so ago we might have said this is a cool shot that was taken at what looks to be Southern Ascot sometime before WWII and it looks like Bud Rose behind the wheel. From what we know from our dry lakes shots we can deduce that the Sta-Lube decal on the hood makes this shot taken in the year 1940. Obviously, we know Bud was also called Butch but how much do we want to know about the graphic on the cowl? Last year and earlier this year we were lucky enough to come into the possession of a bunch of tape recordings that go back to the late ‘70. Among the two groups of tapes that maybe total 100 hours there were some recorded by Bud that might reveal some hidden pieces of information on his exploits behind the wheel. There are also recordings of some early hot rodders in the mix. All these recordings are in the process of being transferred to a digital medium before the tapes turn into dust.

Earlier I mentioned about finding sources for lost information. Well, we’ve found some in the tune of a couple of hundred weekly newspapers that cover our favorite sport during the thirties and there paying dividends. Take for example our DBC_834 shot. We found transferred to a digital medium before the tapes turn into dust.

Earlier I mentioned about finding sources for lost information. Well, we’ve found some in the tune of a couple of hundred weekly newspapers that cover our favorite sport during this story on the building of the track in a paper dated Thursday, April 9, 1936. The story headline was “NEW INDEE TRACK fOR SO. CALIFORNIA”. The story states that Bell resident and businessman Alex Produgiel has purchased land in Southgate at Atlantic and Tweedie Boulevards to construct a half-mile racing track. Supervising the design and construction is none other than “Pop” Evans who has a long history in racing. The track is scheduled to hold its first race at the end of may. Better yet Alex’s son Vince is a car owner in the California Roadster Racing Club and the new track will be it’s home base. Oh yea, one George Wight is the head honcho of the club and his business, Bell Auto Parts, is basically the club’s home base. The track took on the name Southern Speedway and held its first race on June 7, 1936.  All 3,500 sets were packed hours before the show after turning away a reported 10,000 people because there was no place to sit.

Before we get too far down the road, let’s look at a cartoon that appeared in another paper later in the year touting the cars racing at the track (JMC_4476). Does this type of car look familiar? it should!

To tie all this stuff together one only has to look as far as our next shot MLC_091. This September 22, 1935 shot was taken at Muroc dry lake and shows Vince Podurgiel Cragar headed Ford four. It’s also one of the stars of the new California Roadster Racing Club that does double duty as a lakes and circle track car. Under the hood is a Ford banger fitted with a Cragar head. The car features a narrowed ’27 Ford body on a narrowed unknown production car chassis that has been flopped rear to front. The front axle is from Franklin. These axles were banned by on race cars by the AAA because they always broke were they attached to the springs. The rear featured a T cross member and spring with a Model A axle assembly that was chromed like the front end. Car number 28 behind the car was Don Atkinson’s Chevy powered by a Chevy 4-banger fitted with an Olds three-port head. We don’t have any results for this meet.

To backtrack, Vince’s car at the first circle track race was the fastest car in the time trials with a time of 28.97 seconds (that translates to a lap at over 60 mph). It was driven by a young kid by the name of Hal Robson.

To best understand racing back in the day it would be cool if we could jump into our way-back-machines and transport ourselves back to say September 22, 1935, and the Muroc Lake Time Trials. Since we don’t have the technology available to us yet how about if you read the story below first published on February 27, 1936 in one of our newspaper finds to kinda get you in the right think mode.

At 9 o’clock Sunday morning, the race car entered in the first event must be at the pole, while from 5,000 to 10,000 sleepy, dusty race fans line the sides of the straight course.

There are no cash prizes, but the winners receive cups, motor parts, and orders for merchandise donated by sports-loving business men.

Spectators view the races free of charge, and a surprisingly large number of thrill-seekers drive hundreds of miles to see “the crazy kids break their necks”. A prominent Hollywood actress recently chartered a large motor stage to take a party of 30 picture celebrities to see these unique speed events.

No serious accidents have ever occurred in the races themselves, but fatalities reach an alarming total when the speed-minded youngsters stage impromptu contests on the road approaching the course, or on the smooth, flat surface surrounding the track.

Shaky Model  “T’s” that are all motor, queer-looking, fast amalgamations of a little bit of everything, speedy nightmares on four wheels, which even threaten to fall apart when driven at moderate speeds, are skidded and raced about at incredible speed by dare-devil youths with a fine disregard for life and limb. When a young speed-bug opens up one of these flying “junkers” on a curved dirt road, only disaster can result.

At a recent meet, a cut-down speedster, streaking like a lost phantom thru the cold, heavy mist of a desert dawn, suddenly loomed out of the fog directly in front of another roaring “job” burning down the lake. The terrific, grinding crash flung the motor of one car 150 feet from the pile of smoking wreckage, all that remained of two trim little racers. One driver, thrown clear of his machine, only to be killed by the smashing impact with the hard ground, lay broken and crushed on the hard alkali surface of the desert.

The other pilot, soaked in reeking caster oil and rusty water, hung downward over the twisted wreckage, his body completely run thru by a huge sliver of ripped steel. A little rivulet of oil and blood trickled steadily over his smashed face and dribbled with a streaming hiss on the hot motor manifold of the shattered motor.

However, the grim spectacle failed completely as a warning to reckless drivers for, shortly afterwards, one rickety cat, traveling more than 90 miles per hour, dipped into a small rut, dug into the ground, and virtually disintegrated into a mass of distorted metal, after turning end over end for 200 feet. Three lives were snuffed out in this terrible crash.

Nevertheless, the real fans are not frightened away by these unfortunate accidents, and at the same time, many searchers for morbid excitement are attracted by the spectacular crack-up, so amateur racers throughout try find every indication pointing toward a brilliant future for these unusual exhibitions of burning speed.

Sounds a lot like some kind of dime novel story, doesn’t it, with all the blood and guts?

Let’s move on to a shot that we’re guessing is from the early thirties taken on the streets of Los Angeles (JMC-4477). The first thing you must notice is the sticker in the front window of the hopped up ’25 Chevy roadster. It says Muroc Races. Cool! Now back to the Chevy. First thing you notice is screw the fenders and ho-ray for a cool exhaust pipe emitting from and Olds 3-port head bolted to the Chevy’s 4-banger’s motor. The car is fitted with new 19″ wires from a ‘31 model. I think the chrome trim around the back of the hood is off a ’27. The headlights have us baffled as we don’t know what they are off of. To the right of our shy poser is a vintage ’19 to ’22 Model T coupe (the rear window shape gives us the years). Now for the fun part, the car in the upper left. I checked all the cars that had bumpers like this and think it’s a 1926 Lincoln 2-passenger Judkins Coupe.

Keeping with the thirties Muroc theme next up is BNF_103 that shows a crowd of cars milling around the finish line at Muroc on roc on  steal one, oh wait, that’s not legal.

We lucked out in our gathering of goodies and found this rare Muroc Lake Time Trials Program dated September 22, 1935 (BNF_130). The listing inside includes car number, driver, hometown and the head used on the motor. 91 entries were listed but no speeds were shown.

There was also a race held at Muroc on May 3, 1936, so let’s have a look at one of the competitors (BNF_019). Car no. 4 is a ’31 Ford Model A and the engine is fitted with a 4-port Riley head. The program lists one Pete Clark from Los Angeles as the owner of the ride. No Speed is listed in the results we have. Car no. 52 on the right was entered by a James Upshaw. There is a picture of Clark’s car in Drake’s book Flat Out on page 22.  Our angle confirms the car is a ’31 and not a ’30. For those that don’t know Pete ran an establishment called the Uptown Garage and later was crew chief for Rex Mays stable of winning cars.

JUC_083 shows one of the many in the line of evolutionary timing setup used to measure a car’s speed during an event (JUC_083). We think this is a pre S.C.T.A event. Love the 6-volt batteries.

Talking about timing, besides the piece of paper taped on a competitors car his real prize was getting a brass timing tag. JMC_4475 shows Milers member Max Bowles’ August 24, 1941 Muroc timing tag with a speed of 108.04 mph. He ran a roadster fitted with a Ford V8.

Last up is how things have changed but really haven’t. JMC_511 shows another Muroc Timing tag only this one is from June 25, 2000. Yours truly was behind the wheel on this one and had what we call a bad run. We were looking at a run of over 200 mph but that wasn’t going to happen because a burst plate on the blower went south and no one discovered it until the next morning. And no, we didn’t have a spare one. If we were smart we would have taken the car to impound, been certified for a record of 183.697 mph and been in the record books forever instead of being just another aborted run on race day. Oh well. Nobody said we were smart. 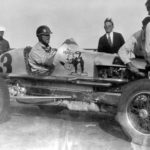 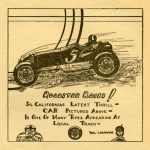 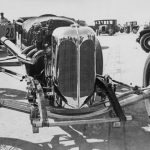 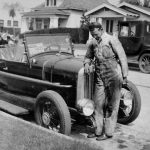 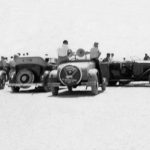 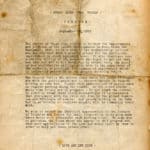 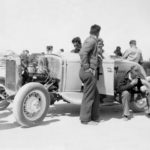 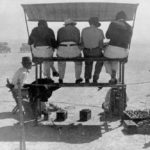 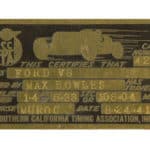 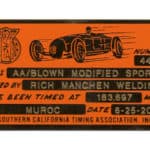