We didn’t get a lot done around here this last week. After going through a few hundred shots from New Hampshire we converted 50 or so into tifs for use on the site.

Our friend Gary Sutliff had lent us a dozen boxes full of slides amounting to about 600 slides that were all mixed up. First, we sorted everything by date and came back and put them in numerical order thanks to the key numbers on the slide mounts. The dates ranged from 1975 into 1981 with many groups of slides during the same month, so we had tmbers were shot on the same roll. Needless to say, this whole exercise was a complete nightmare. After sorting we put the slides in protective sleves.

Next up it was create an AHRF ad that will go in the David Fetherston book on Land Speed Racing that will debut at the 2014 Grand National Roadster Show in Pomona this coming January. While we were at it we proofed the 1949 to 1960 section of the manuscript for David.

If this wasn’t enough on Friday I went over to do a preliminary once over on AHRF contributor Mike Littlefield’s dry lakes racer before taking off for the monthly S.C.T.A. Board and Reps meeting. Enough of my ramblings, let’s look at some pictures.

Let’s start with a couple of shots we took bach at the New England Hot Rod Reunion. First up is JMC_4360 that shows some cool old iron. We see the ’73 black Buick Opel of Kroona & Sandberg. Behind it is their other toy, the Kroona & Sandberg Anglia that can be traced back to 1969. Both these cars are fully restored and you could eat off of both of them, there that sano. As of now, we don’t have a clue on their race records but hope to fix that soon. Next up is the coolest looking ‘55 Chevy we’ve ever seen (JMC_4355). Ron Rinauro’s name is on the door and we know that he was a Northern California racer and is not with us anymore. He used to run a ‘55 Chevy hardtop gasser back in the day that was called Blown Hell. The fender says the engine was built by Ted Gotelli. He’s a famous South San Francisco Speed shop owno go through them and guess what duplicate numbers were shot on the same roll. Needless to say, this whole exercise was a complete nightmare. After sorting we put the slides in protective sleeves.

Next up it was create an AHRF ad that will go in the David Fetherston book on Land Speed Racing that will debut at the 2014 Grand National Roadster Show in Pomona this coming January. While we were at it we proofed the 1949 to 1960 section of the manuscript for David.

If this wasn’t enough on Friday I went over t shot of from the A.B. Shuman Collection so here it is (BSC_120). This shot was taken on May 8, 1960, at the Sanford, Maine dragstrip on a really nasty looking day. The car is the A Gas Dragster owned by the Sidebotham Engineering Company of Burlington, Mass. It was maintained and driven by Eldon Sidebotham and David Creeham. Based on Chassis Research rails, it sports a stock bore but stroked ’58 Olds V8 topped with a GMC 6-71 blower. At the time it owned the Sanford and East coast Gas record of 160.45 mph. Wheelbase is 94″ with 52″ front and 38″ rear tread. Looks like the old magazines have come to our rescue in the ID department.

Earlier I mentioned having a look at Mike Littlefield’s almost finished car. As a thank you, he gave us an old program from his departed dad’s collection of goodies. MLC_153 shows the gift, a 1954 Indianapolis 500 Mile Race Program. How cool is that? It’s full of great info that we historians go bonkers over. Thanks, Mike.

While on the subject of the 1954 “Spectacle” let’s have a look. His involvement in drag racing can be traced back to ‘59 with the Glass Slipper among others. Since this is a post car and has an altered wheelbase we don’t know if it’s a tribute car or not. Looks like more digging on our part is needed.

We showed you some of our magazine finds in the swap meet area at the Reunion in our last story. JMC_4402 shows one of them. We see Volume 7, number 10 of Rodding and Re-Styling from December 1960.  At the top is the father and son built ’34 Cabriolet of George Spieler Senior and Junior of Holbrook, Mass. Bought for $100, it was off to the wrecking yards to scrounge for rebuild parts. A 265″ Chevy was picked to power the channeled the bottom is the Speed Sport Special II. The car was built by owners Joe Bush, Lyll Fisher and Red Greth of Blue Island, Illinois. It ran a 454″ Chrysler fitted with a GMC blower. Top run as of the publication date was 176.80 in 8.0s seconds. Inside this issue was a story on an interesting looking dragster that we just happen to have a look at one of its players. “Dapper” Danny Oaks is seen standing next to the number 49 Johnny Balch ‘54 Indy entry, the Micro-Nut Special (OAK_050). Danny practiced in the Offy powered car and recorded a speed of 137.237 mph but was to slow to make the grid. To put the speed in perspective the slowest qualifier in the race was Frank Armi with a speed of 137.673 mph and nine cars qualified in the 137’s so he wasn’t far off the pace. Danny also tried out the Marian Chinetti Ferrari entry with the same results, too slow.

Last up are two slides from the nightmare sort job mentioned at the beginning of the news. Both were taken at the Antique Nationals back in 1980. DBC_661 shows a clean drag car sporting a ‘27 Ford body. All we can make out in the ID part is that the door reads Jill’s Cents. It’s flattie powered and fed through Hilborns. DBC_662 is a really interesting shot. From the way it’s cropped one assumes the shooter was more interested in the blonde girl with the short shorts than Bill Brodek flattie powered railjob. I think he made a wise choice, don’t you? 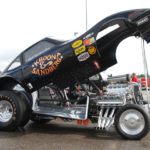 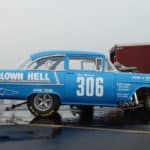 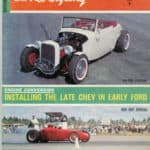 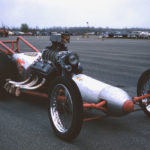 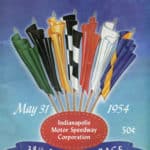 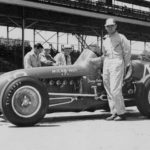 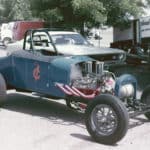 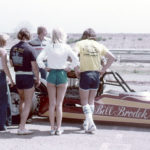 Previous Post: « A Good Time Had By All
Next Post: What did we do this week? »
↑ Top of Page