It was another hectic week for us at the AHRF but we made up for some of that by goofing off a little at El Mirage on Saturday and Sunday. Along with getting doses of nitro and listening to engines rumble while shaking the ground, we got plenty dirty. It was also pay-back time courtesy of mother nature in the form of presenting us with 100-degree weather and turning us a nice shade of red thanks to the sun.

Since official results will hit the net in a few days we’ll just show you some cool rides and do a little blabbing about the pictures. Let’s get with it.

In the past, it ran as a lakester but Jack is always thinking and out-smarted everyone again by slapping some fenders in front of the front wheels. At the beginning of this year, the record stood at 173.781 mph and was set back in October ‘06. What did our wizards with Jim at the wheel do at the June event? They went out and upped the record to 186.086 mph. Not satisfied, in July with a little tune-up they bumped it again, this time to 191.736 mph. Is 200+ in the cards? This shot shows Jim warming up the engine before his first run on Sunday morning (JMC_5599). You can see how tight he fits in the car. Also, note the camera mounted on the front of his helmet to record some of the action.

For our next act, we got to get pelted with dirt as John “Big Balls” Noonan (that’s the way his entry is listed on the paperwork) takes off on a run (JMC_5600). To give you a clue to how hard John pushes his 1350 cc gas fired bike in June he only ran 250.514 mph for the fastest speed of the meet. He switched to Fuel at the July meet and broke his six-year-old record with a run at 237.070 mph. This time he missed being the fastest ride on the dirt by .828 mph. His bike control is amazing, every time he runs it, hello rev-limiter, and when the turbo hits the rear end jumps sideways more than a couple of inches.

One of the tastiest Roadsters at the lakes is Erik Hansson’s Gas Roadster (JMC_5602). Erik builds these beauties for a living at his shop called Scandinavian Street Rods. His talents even got him first place at Pebble Beach so he is a real-deal builder. On this run there was a slight problem with the clutch that left him stranded inches off the starting line. He got is re-fired and went on his merry way.

If you like bikes you’ll dig this next shot (JMC_5601). At our Sidewinders meeting last week a fellow named Kiyo was voted in as a new member. He told us a little about his bike he planned to run at the September 13 S.C.T.A. meet. While walking up and down the staging lines this morning (Sunday) I spotted rad bike that looked like it was right out of a custom car and bike show. Guess what, It was our new member’s ride. We need some Ray-Bans on this one. Cool!

There is always some cruiser at the lakes we’ve never seen before. Our next shot (JMC_5603) fits the bill to a T. The hood ornament says Plymouth to us and the body is definitely a ‘33-’34. The only other thing we can say for sure about it is its Hemi. Introducing the Drag-N-Rat.

While on the old stuff kick lets have a look at Bill Warth’s Modified seen at Muroc back in 1938 (TDC_204). Under the hood, we find a Ford 4- banger fitted with a Winfield head. The shot was snapped on either May 15th when he ran it as car number 162 or on October 2nd as number 2. Sadly we have no speeds on the car. The car originally had a canvas body and was the “test vehicle” for Mr. Warth’s next creation. Bill’s ran his next slippery piece for a while before selling it to one Stu Hilborn on December 2, 1941. The car made some history just like the date.

The car was made even more famous when artist Gus Maanum did the attached drawing of it (JUC_011).

Why all the hoopla about the car? Well, Jim Lattin has done another of his famous tribute cars and yes it’s the Warth, Orr and later Path-Moore ride. We see the beauty in his pits at El Mirage on Saturday (JMC_5597). After Orr was finished with it he sold it to Bob Path who ran it with his partner Chuck Moore in 1948. For 1949 they added a tail and ran it in the streamliner class. The car was then fitted with a ’48 Merc flattie with Navarro heads, Evans intake, Kenny Harmon cam, and twin mags. It’s fastest speed that year was 149.25 in September.

Last week we showed you some of the snaps we received from Joe Henning featuring Midgets and Big Cars. We scanned the all during the week for you. Let’s look at one each. JHC_1333 shows a bit of action at Bonelli (Saugus) Stadium back in 1945. Walt Faulkner is seen in Jack London’s number 1 V8-60 powered car keeping a tight line that forces Frank “Satan” Brewer to take the high line in his own v8-60 powered car. From some preliminary digging, we discovered that the London car was previously one of the Casale cars that were driven by Johnny Parsons. Our other shot shows the late great Rex Mays at Del Mar on November 6, 1949 (JHC_1367). The sad part is that Rex would crash to his death on the 14th lap of the 100 lap race, or not too long after this picture was taken just before the start of the race.

We’ve also been busy going through a stack of shots taken up San Francisco way back in the ’30s. One of the shots we ran across shows famous illustrator Jack Buxton in his former life as a race car driver (CKC_2208). He’s seated in Charles Bobby’s all-conquering Chevy-4 powered ride.

To put some loose ends together from way before we were born about the above Chevy we dug out this great little book that was first published back in 1994 that covers the early days of dirt track racing in California (JMC_3003). It’s called The Bobby The Babe and Me. It’s a great read if you like the old stuff.

To tie the last two images together here’s a drawing by Buxton that he did of Babe Stapp when he was a big name and raced at Legion Ascot in the ’30s. This is an original Gilmore Oil Company give-away that was autographed by the Babe over 80 years ago. Bet there aren’t many of these floating around.

We’ve got a bunch of old Negatives that we’ll dig into during the week for you. Who knows what rare stuff is waiting to be re-discovered. 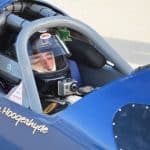 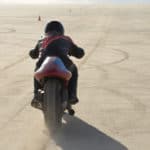 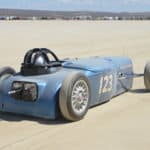 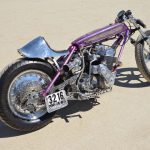 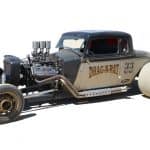 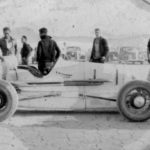 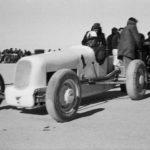 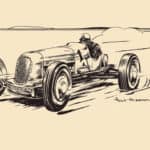 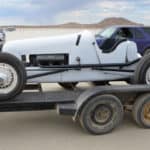 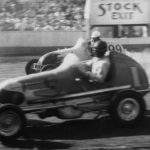 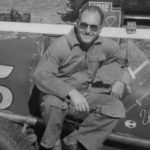 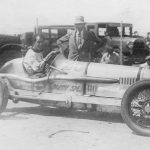 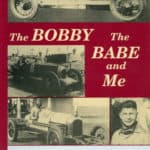 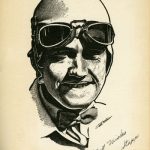