No sooner than we finish one story the next one starts. Early in the week we drug out a couple hundred 8’ x 10” black and white shots and started the sorting process. We merged together three boxes and started with a guesstimate of the date shot and put duplicate shots together. After this hard part, it was time to turn into a scanning fool.

The week previous we had posted a couple of shots from the first Bonneville event from ‘49 featuring our pal Kay Kimes and we had chatted about the shots. Then last week I posted the Auto Topics cover showing Paula Murphy. On Tuesday Kay calls and tells me he was there at Bonneville with Arfons working for Jim and Marion Deist along with George Callaway. Scribe Don Francisco was also there. Seems the salt was pretty wet so they sat around for most of the week drinking coffee, bench racing and whatever you do in a border town that’s full of saloons and gambling establishments. Paula comes out to the salt, does here thing on November 12, 1964 and then departs. The attached shot from Kay via Paula shows how nasty the salt conditions were (PMC_001). Our hats are off to her for this herculean feat. JIm and Marion flew home with Francisco and Kay was left to do a little commune with God and nature on the salt before taking off for home with George. Road trips are part of Bonneville lore and their trip home was one of those. Between snow, no guard rails,15 foot drop-off’s on each side of the road, black ice, and running into a Deer, they were lucky to even get back to L.A.

Talk about weird, I had identified Bob Morton’s Photo of the Day that appeared Wednesday as Jim Seabridge’s (BMC_026). According to the programs, that was correct but another phone call from Kay straightened me out on this, Seems the car was actually Kay’s and he had lent it to Jim to Run. A little digging revealed the car had turned 96.46 mph at El Mirage. What’s even cooler is that Kay attached our next shot showing the car in street trim in 29 Palms (KKC_070). Kay is playing with the motor, Jim is leaning on the windshield and two cute girls were with them. Must have been quite a cozy ride. Thanks for the update, Kay.

We always try to keep upbeat around here but it was also bummer week as we learned of the passing of two more of our pioneers, Fred Carillo, and Doug Hartelt. It’s the least we can do to share a couple of pictures and express our sympathy to their families. God Speed fellow Rodders.

First up, let’s take a look at what rests behind the driver’s seat of the number 36 Carillo & Betz 1949 Bonneville entry (DOT_948). We see a Ford V8 fitted with Edelbrock heads and fed by three 97’s. The Class B Lakester (classified as such due to the car having a streamlined nose from a belly tank) was sufficiently fast enough to qualify at a speed of 139.31 mph. The only problem was they couldn’t two way it so the Star & Alger boys went home with the record at 134.73 mph after qualifying at 134.12 mph, some five mph slower than our number 36 car. The chassis was built with WWII PBY Catalina wing struts that were elliptical in shape and made of 4130. Note the front of the generator plate used to carry the fan belt and the lack of any kind of roll-over protection. Drivers had helmets and usually wore t-shirt and jeans.

Road Runners member Fred Carillo’s completely rebuilt his ’49 Bonneville entry and ended up with this wildly colored Purple and Chartreuse Class C Modified Roadster that was photographed at the May ’50 El Mirage meet (GGC_089). Check the third ever color-cover of Hot Rod magazine from June ’51 to see how weird it looked. The car was powered by a ’34 Ford flattie of 239″ and ran 144.00 mph for sixth in class. Later in life, it went to Daytona Beach for some speed runs on the sand and then to new owner Jack Stecker and his varied partners for more Bonneville and drag racing action. It was repainted black and called the Black Widow. It’s alive and well and a little tired these days in Jim Lattin’s private collection.

Fred went on to build the slipperiest Chrysler powered streamliner ever to be seen at the salt but unfortunately crashed it and lost a foot. For his next act, he started making connection rods and became really famous for it.

A Stylin Doug Hartelt shows us how to latch the hood on his Class C Lakester at El Mirage on a September ’49 race weekend (GGC_210). The car ran 152.80 mph for a third in class. Doug was a member of the Lancers and S. C. T. A. Champion with this car in ’47. This car had run at the lakes during the 1941 season as a Modified using a narrowed body and carrying number 297. Fellow Lancer George Yanase owned it before he and his family got sent off to Manzanar. To the left of Doug’s shoulder, we see the nose of Marvin Lee’s 247″ ’47 Chevy 6-banger powered City of Pasadena Class B Liner. He ran 154.63 mph at this meet for a first in class.

Hartelt showed up at the lakes in ’51 with a new creation in the form of a Class B Modified Coupe with bodywork by Harold Post and sporting primer (GGC_065). At the June meet he ran 134.932 mph to take second in class behind Bob Pierson. By Bonneville, the car had paint and a speed of 138.888 mph in class B for third and 158.450 mph in class C for second. Doug worked out of his buddy Chuck Potvin’s shop and went on to become a true engine guru. His motor in the Harold Post Streamliner was the first car to unofficially run over 200 mph at El Mirage.

Next up is another real find (DOT_957). We see a pre-war edition of the Bell Auto Parts Race Car Products Catalog when George Wight owned it. On the cover is a cool Eldon Snapp illustration. (Eldon was the guy who designed the S.C.T.A. Winged Wheel Logo that’s still in use today). Inside the prices blew me away. You could get a brand new Cragar head complete for an A or B  for only $100. How about a Bell steering wheel for $15, gauges for $3.50 or a hand fuel pressure pump or $8. In the back of Wight’s shop, a young kid by the name of Roy Richter was building race cars for sale. You could get a complete body setup consisting of cowl, cowl frame, hood, seat, tail, tail skirt, underpan, firewall, and instrument panel for $248. WOW. He would later buy Bell Auto Parts and make it world famous.

George Wight was a pretty smart cookie and when first Miller-Schofield, and then the Cran-Gartz Company folded he bought some of their bankruptcy items, namely the Cragar head patterns and accessories. These products would make a name for themselves in circle track racing a new sport known as time trials. AJC_044 shows an unknown spectator’s Model-A fitted with a Cragar head and dual carbs at a place called Muroc. Note the customized ‘36 Ford in the background with smooth hood sides and no hubcaps.

Besides lakes racing the Cragar really came into its own in circle track racing all across the country. This photo was taken at the one-mile Oakland Speedway in 1938 (CKC_11(CKC_1700). Driver Jimmy Miller is seen in Neeley Bukitt’s junky looking Cragar-headed Ford-powered special that ran as a class B car. Two Winfield carbs feed it through a cast aluminum intake manifold. Burkitt also owned and campaigned another car called the Atlas Chrome Special at this same track before Chick Barbo flipped it and deposited what remained of it 250 feet off the track on September 2, 1940. Miller raced until after WWII when he perished in a Midget wreck a few months after I was born in 1945.

Karl Orr’s number 6 Modified on the left is seen at Harper Dry Lake in 1940 during one of the last three S.C.T.A. meets held that year. (HEY_027). The car ran a Cragar head on a Ford 4-block. Karl owned a Speed Shop on Washington Boulevard in Culver City that catered to lakes racers and gow-job builders in the area. His fastest speed was on October 6 when he turned 120.00 mph. On the right we see a really nice looking chopped Deuce 3-window coupe.What makes this one special is that it has fenders but no running boards and the back end is has been lowered. It’s got an aftermarket bumper-bar to protect the grill mounted on a ‘37 DeSoto bumper. The shot is too soft to tell whether or not the item in the center of the front bumper might be off a ‘38 Buick or Olds, or the Deuce’s hood side panels might be running chromed vents off a ‘32 Chevy. The headlights also look like they might be off a Chevy as that was the trick setup in those days.

One of those scanning fool shots I mentioned at the top of this week’s story dates all the way back to 1924 (DBC_808). Every good race driver had to start somewhere and this shot shows Francis Quinn in the early days of his career. The car is the Ballanger Rajo at Ascot Speedway before it became Legion Ascot. Look closely and you’ll see that the ride is made up of mostly Model T parts as were most home-built cars of the day. If you think Ed “Axle” Stewart from San Diego was the leader in dropped axles check out how radical this Model T front axle has been tweaked. Note the flattened front spring and the leather rebound strap holding it to the center T cross member. You can also see a strap on the rear axle. Quinn became the terror of the track and went on to become the Pacific Coast Champion at the end of 1930. On December 31, 1931, on the way back from a canceled northern California race the 28-year-old Quinn’s Model A tow-car was sideswiped and demolished by a truck north of Fresno. Bye Bye Francis.

To finish off this week we’ll stick with a T, but a whole lot nicer one (CLA_205). Our slide dates from May 1976 and was taken at the Long Beach Model T Club Hillclimb and shows Land Speed racer Seth Hammond’s fuel-injected DOHC Fronty T Ford-powered hillclimber. This one features a stock front axle so you can see the difference form the Quinn driven car. Seth still has the car and the last time I heard it was hanging on the wall of his shop. Yes, it is art.

During the week we even got in a little goof-off time with a trip to Isky’s for another great lunch with David Steele, a trip to Bill LaRossa’s garage for some bench racing, to see his great collection of vintage 4-cylinder race engines and ‘30’s era sprint cars with Terry Baldwin, a trip to Fred’s book store without spending any money, taking in the Santa Ana Drag Strip Reunion Picnic put on by our friend Leslie Long and last but not least, going to the Sidewinders Annual Picnic. As they say, just another boring week. 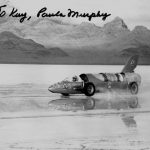 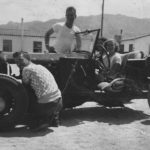 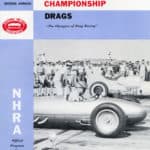 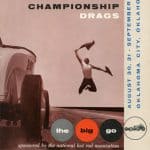 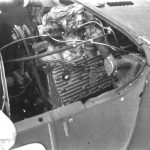 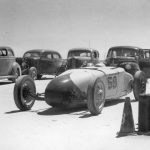 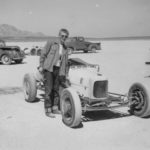 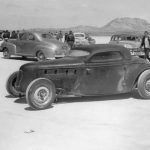 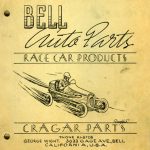 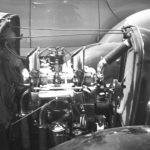 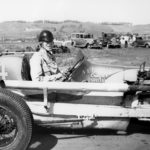 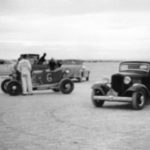 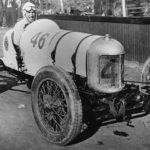 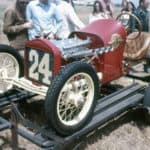