Car guys are interesting folks. Some only like one kind of vehicle while others like anything with wheels. In this category, we have to include one Tom Sparks. We first ran across him at Rosamond Dry Lake back in 1945 driving a Model A. A half-century later he’s judging the world’s finest rides at Pebble Beach. In between, he had done just about everything. Let’s have a look at some of his adventures that we scanned this week.

We see a young Tom Sparks holding a couple of trophies at the end of the day. At the meet, he set a new record for Modified Fuel Coupe at 126.99 mph. The Sparks & Bonney Willys with Tom as the shoe was the terror of California tracks at that time setting many records, like Santa Maria at 123.28 mph, Pomona at 128.50 mph, Colton at 126.40 mph and Saugus at 125.80 mph.

There was this upholster guy over in Sherman Oaks, California back around 1956. By this time he had a good reputation for doing real classy work. When he got the racing bug his car naturally had to be a show stopper as well as a goer. That’s where our pal Tom Sparks comes in again. Seems Mr. Tony Nancy needed the meanest engine available for his new racer in the form of a supercharged flathead. His choice for the job was Mr. Sparks of Sparks & Bonney fame. This shot (TSC_050) shows the results of that pairing.

We received a package on Saturday from John Tomorowitz down in Florida. It has some super cool shots in it so we had to share this one with you. Seem’s John’s Uncle Jerry Secunde was in the Navy back in ‘52 stationed at Jacksonville Naval Air Station. He hooked up with a group of fellows that formed the North Florida Roadster Club. This entity was cool enough to become Hot Rod Magazine’s December ‘52 Club of the Month. Jerry’s car was shown in-build in that issue. The shot we present here (JTC_005) is the almost finished version featuring molded-in doors. It’s seen at Jacksonville Speedway in late 1952. Why was he at the track? Fellow club member Johnny Thompson of NASCAR Fame was racing that day. For our detail freaks, the track was located at Lennox Avenue and Plymouth Street and is now an apartment complex.

As you know we like the obscure and our next shot fills that bill perfectly (JMC_5923). We see Norman Smith in this 1928 shot behind the wheel of his Chevrolet Roadster. As you might figure out it was fitted with Roof head and went on to win a 10 1/2 mile race for 4-cylinder modified stock cars at the Atlantic City Board Track on May 30 of that year. In the free-for-all race that followed Norm finished second behind one Ralph DePalma in a Mercedes. Looks like more stuff needs to be researched on this one.

Our Pal John Baechtel is doing a book on the Summers Brothers adventures in Land Speed Racing and needed some help. We found this shot of the brother’s Class E Modified Roadster before a run at Bonneville in 1957 (CWV_008). Cliff Wheeler passed the formerly faded and stained Kodak print our way for fixing.  The rear-engined car finished first in class over eight other entries with a speed of  204.31 mph. It was powered by a 343″ Chrysler Hemi fitted with a crank driven supercharger. Bill did the driving and both he and his brother Bob did the wrenching.

In keeping with the “there are never too many pictures of the same car” over the years deal we just found some old (20 years or so?) Polaroid’s in our Joe Henning stuff that fills in a gap of a rare car’s 88 and counting year history (JHC_1503). Nice flame job huh.

JHC_434 shows the car in 1927. Earl Cooper built his version of a front wheel drive Miller and called it a Cooper. Car number 14 that we are looking at is the result.  It was initially sponsored by the Buick Division of General Motors hence the Buick looking grill shell but the deal fizzled. Powered by a 90″ Miller straight-8 the yellow and black car with driver Bob McDonogh behind the wheel qualified for the Indy 500 in seventh place at a speed of 113.175 mph. In the race, Bob drove soldiered home in sixth place at an average speed of 90.410 mph. Earl Cooper is standing next to Bob in the picture.

For the trivia buffs, this shot was taken by “Gray” and was used as a promo shot for Winfield Carburetors.

Here is another great picture of the car and a bit of Indy trickery (CKC_825). Dusty Fahrnow and Donald Cheek put this old Cooper chassis (widened into a two-man car) and motor into the 1934 race for owner Irving Goldberg as car number 42. For you eagle eyes, the number is written on the neg like the description below it as it hadn’t been painted on yet. The engine consisted of two Cooper straight-8’s geared together at the firewall and that drove a shaft between them to the original Cooper-Ruckstell front end. (Ruckstell was famous for his two-speed Ford rear ends). The blue car started the race in 25th spot and lasted 28 laps in the race before a con-rod went.

Yes, it’s basically the same car after many mods in between (JHC_387). Welcome to the last race at Indy that the car qualified for, 1948. Doc Williams is behind the wheel as he had been many times previously. Under the hood was a 255” Offy that still fed the original Cooper-Ruckstell FWD setup. Amazingly Doc put the car in the sixth starting position with a speed of 124.151 mph. In the race, he lasted 19 laps before the clutch went south.

After disappearing for over a decade Lou Schorsch is the declared owner of the ride that was photographed at a San Diego car show and published in the February 1962 issue of Car Craft Magazine (JMC_1504). It was all gussied up with quad headlights and a V8 for use in the short-lived TV show called Straightaway that first aired in October 1961 on ABC Television. 26 episodes were produced by Desilu Studios in Culver City. The show starred Brian Kelly as Scott Ross and John Ashley as Clipper Hamilton. The premise of the show was Scott and Clipper were partners in the Straightaway Garage and they built and maintained racing cars. By this time the car had what’s left of its original chassis and sported a Dodge front axle and rear wheel drive

Over a decade ago we saw the car in a restoration shop in Santa Clarita after it went through many owners collecting dust in sadder shape than what you saw in the Polaroid’s. Then back in June 2010 on a tour of the Mullen Museum, we spotted the car again after it had received just a little work (JMC_5925). We know it been sold since but know not to who. Looks like the saga of the old car could very likely make it to the century mark in a dozen years or so.

On our agenda in the next few months is to get our site working properly again. Thanks for hanging in there. At the end of the month, it’s Grand National Roadster Showtime again and building nine will be filled with Land Speed Cars once again. And yes the AHRF will have a booth there so stop by and say hello. 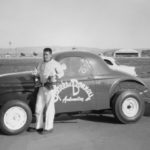 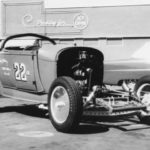 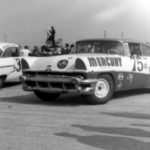 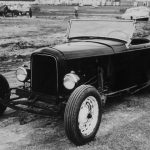 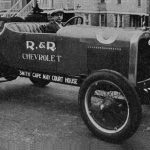 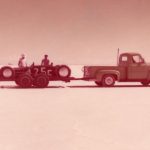 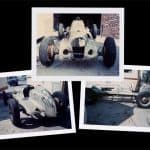 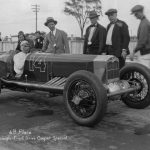 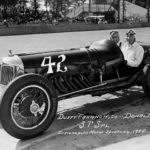 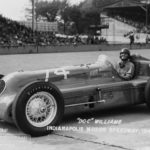 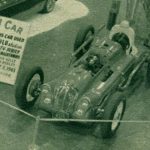 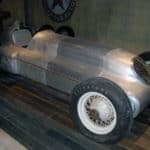