You would think that after doing all the pictures and stories every week for the last few years it would get a little easier. In actuality it harder. It’s kinda like when you go surfing the net for info on a particular subject that leads you to another and another and pretty soon you’re off in some other direction discovering even more stuff.

Doug called to say thanks for the work we did on his shots and we got to talking first about Frag Strip in his part of the world, Omaha. Pretty soon the jabbering turned to other forms of car racing and those funny cars that slide sideways in circles on dirt ended up center stage. The midwest has always been a hot spot for dirt sliders. About two hours due East of Omaha is a place called Des Moines, Iowa so we dug out a shot of the famous Gus Schrader at that track taken back in 1936 (CKC_1361). About 60 miles south-east of that is a little town called Oskaloosa. Longtime San Diego Roadster Club member and Bonneville starter Bill Taylor presented us with his shot of a young kid called Tony (soon to be called “Smoke”) Stewart sliding through a corner at the Oskaloosa, Iowa track back on August 9, 2005. See how easy it is to get sidetracked.

We can also blame the modified Ford illustration for getting me out of the computer chair this week and paying a visit to our pal Joe Henning. The camera came along for the ride and we snapped him hard at work on an A.J. Foyt drawing for steering gear guru Gary Schroeder (JMC_5241). For us old dudes all one has to do is dig out a copy of the August 1955 issue of Rod & Custom to see some of Joe’s earlier work. To save you a lot of trouble it’s probably easier to click on JHC_249 to see his creation from a story on building a Roadster for a Dollar a Pound.

While we’re on roadsters check out JMC_5241 snapped at the January ‘08 Grand National Roadster Show in Pomona. Up front we see the Krays Auto Parts Special followed by the yellow Rudy & Weinstein ride, the dark blue Jim Khougaz beauty and the Munz & Busby street roadster. To see the above cars in their natural environment all one has to do is click on the next four shots.

CWC_095 shows us the number 112 Class D Modified Roadster of Howard Leever and Fred Essor out of San Francisco at Bonneville in 1956. It ran as the Krays Auto Parts Special and was powered by an Olds V-8. It ran 167.91 mph for fifth in class. The slick nose was the work of the Bay Area’s Jack Hagemann.

In CWC_017 we see AHRF pioneer Jim Khougaz’s as yet unpainted car no. 7000 is seen at Bonneville in 1957. The unfinished car was powered by a 467″ Chrysler and got the Class D Modified Roadster up to an amazing 212.76 mph, eight mph over the record, for first in class but couldn’t make a backup run for the record. Jim also took up aerial training when he flew the car and bent it badly when it landed.

During the week we finished reading the book called Miller’s Time (no relation that I know of (JMC_5340).  The subject matter, Don Miller, partnered with one Roger Penske in more than one successful business venture. If you like drags, with a bunch of NASCAR thrown in this book is one great read.

We can never get far away from playing on the salt so here’s a shot of a Don Miller’s ride playing at our favorite playground in ‘90 (SCT_254). A 276” flattie was used for power and Don managed to post a lap at 128.50 mph before he lost a head gasket on a later run.

While on the Great White Dyno theme our next image is an Info/Autograph Card for Charles Nearburg’s Spirit of Rett Streamliner (JMC_5238). On September 21, 2010, Charles drove the car to an FIA record of 414.316 mph to retire the Summers Brothers’ decades-old Goldenrod record of 409 mph. It was originally built and run by Howard Nafzger. Earl Wooden later bought and stretched it before Charles got it and took it to a new level.

Here’s a close up of the Nearburg liner showing Crew Chief Lee Ryan doing an early morning warmup at Speedweek ‘11. That week Charles got two more records, A Gas Streamliner at 353.825 and A Fuel Streamliner at 379.606 mph. Wow!

We then next dug into some more lakes shots from the Bill Phy Collection and did some retouching. This one shows his Russetta Roadster that we place around ‘47 (BPC_099). When we find some results from that period we’ll update the missing info.

Our next Bill Phy Collection lakes shot from1947 shot shows Road Runner’s member Randy Shinn buzzing across El Mirage in his Class C Roadster (BPC_046). The ride was powered by a Merc fitted with Edelbrock heads and intake along with a Windfield cam. We have him running 124.48 mph on July 6 for a 3rd in class and establishing a new class record of 127.84 mph in August. For the September 21 meet he switched to class D and ran 133.13 mph for a first in class. For October he switched back to Class C and ran 131.77 mph for a 2nd in class to finish 3rd overall in the points standings. Note the similarities to this car and the above shot.

Moving back to B-ville in the year ‘53 we see the Thomas Brother’s Class C Modified Roadster from Tacoma, Washington (PCK_016). It was powered by a ’46 Ford displacing 196″ and put in a run at 141.95 mph that was good for a seventh in class. We like the Bardahl stickers on the side of the car and the Sta-Lube oil cans sitting in front of it not to mention the taped on carton for added streamlining. The question now is what brand of oil did the brothers really run? And yes we like the damsel’s outfit in the background.

The Kenz & Leslie Floyd Clymer Motorbook Special is seen in front of Trophy Headquarters at Speedweek in ’53. Maremont Products out of Chicago was the sponsor. The baby-blue ride ran 255.31 mph for a first in class and went home with a new Class R Record of 255.411 mph. The tall trophy in the rear is the Hot Rod Magazine fastest run of the meet trophy that is still handed out at the end of Speedweek till this day.

We only have four more shots to bore you with today as were out of energy being that we spent this weekend getting sunburned at El Mirage during the last S.C.T.A. meet of the year. Official speeds should be posted by mid-week so here some blab instead of details. First up is the new Paramount Forge Streamliner run by the Ferguson family (JMC_5245). The car ended up setting a record this weekend driven by Ferguson III. A couple of years back we showed you a picture of the chassis taken at Art Chrisman’s shop when then owner and former Lions Drag Strip starter “Weed” was laying tubes and Art’s son Mike was doing the welding. Fast forward and we see that the Ferg’s have rebuilt almost everything in the last year or so into one slick machine. Dennis Jones did the bitchen graphics on the car.

For our next act, we present Erik Hansson’s latest ride, his Scandinavian Street Rod Class XF Blown Gas Roadster (JMC_5246). Talk about being in the weeds, this puppy is low and sleek. We snapped this shot in pre-stage Saturday during the first round with light coating of El Mirage dust. He and his significant other Ruth Lundring were spotted behind the wheel. The sleek windshield caused a cockpit dusting problem and was later remover. On Sunday the car showed in impound and but they were a sliver under the record, bummer. When it’s sorted look out. Those cool looking wheels aren’t Halibrands, they have Foose cast in them, Nice!

A stop at the starting line almost got me run over ( just kidding) (JMC_5247). AHRF contributor Mike Littlefield was working out the finer details of tuning his new carb setup on this lap. On Sunday he had it working too-good and flat spun it, ruining three new tires, Outch

Our exit shot this week shows Mike Cook almost coming to a stop after completing a run in his Dodge-Powered Modified Sports. His engine partner Wayne Jesel was on hand and we had a great chat. Mike’s chutes got a little twisted when he popped them after clearing the lights but they still did their job on this record-setting ride.

That’s enough excitement and jumping around for this week. 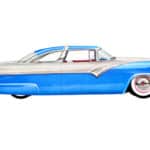 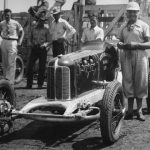 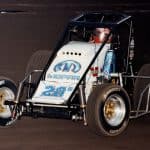 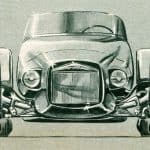 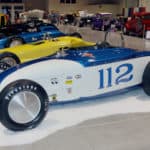 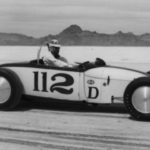 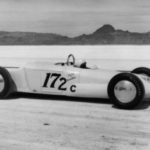 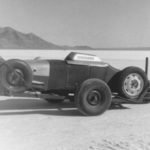 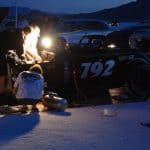 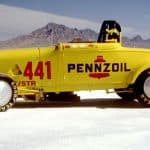 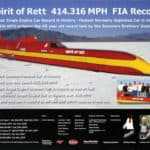 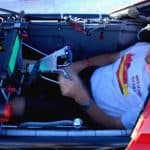 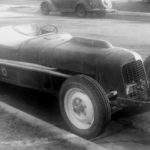 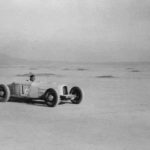 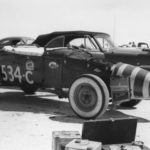 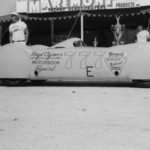 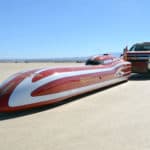 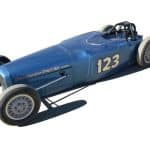 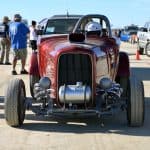 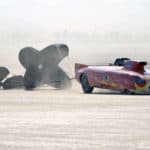