We’ve been playing catchup for the last couple of weeks. Being out of the office for five days really sets one back a bit in our quest of getting the pile of things to do smaller.

Were on the downhill slope of scanning a tone of Grand National Roadster Show negs scanned. Most of them were underexposed so we have to do a preview scan then go in and make some fairly drastic corrections before the actual scan takes place. After that, it’s open the shot in photoshop and make more corrections before getting an image that’s useable.

We’ve run across a lot of pinholes in the “old” 35 mm negs so that adds even more retouch time to bring em back to life especially when there enlarged 10 to 20 times their original size. Guess you could say that’s why we’re here.

Let’s look at a couple of the saved ones. First up is a wild 1939 Harley-Davidson that was the work of Ted DeWilde from Vallejo, California (GHC_203). The 1966 Grand National Roadster Show Program listed the bike as being called “One Step Beyond you” but the title card in our shot calls it the “Revenger”. The front forks have been extended 7 1/2 ” and we have the colors as Candy Apple Green and Lime Gold Metalflake. Check out the coffin and the chromed German helmet.

I guess you could say all customs are not created equal (GHC_195). Bill Corridan from Saratoga, California started out with a 1961 Chevrolet and made quite a few changes to it before entering it in the 1966 GNRS at Oakland. Up front, the car features custom dual headlights and a rolled pan not counting an interesting grill. Outback homemade tail lights did the trick. A vinyl covered top, purple metalflake paint and Buick wires complete the package. Under the hood was a 348″ Chevy. To it’s right is an unknown bubble-top ‘56 Lincoln Continental.

We’ve got quite a few lookers that weren’t listed in the ‘66 program and GHC_214 is one of them. This ‘53 Chevy has the “gasser” look down to a tee and it’s a bummer that the info card under the open door is too small to make out any info from. The wood chips and bricks make for an interesting display.

About a year ago we got a great collection of shots from Omahaite Doug Rasmussen. A few miles north of his Omaha, Nebraska home was an old airfield that served as a dragstrip for the area’s residents and Doug just happened to tote along his Kodak Brownie to capture some of the interesting rides that showed up to play. This shot was taken in August 1961 and shows us what a contemporary roadster of the drag kind looked like (DRC_060). We call it cool. Check out the great Road Stars shirt on the unknown racers back.

After seeing some of the GNRS shots we’ve posted over the last couple of weeks Doug called us in the middle of last week and asked if we like to scan some of the shots he took at the GNRS when he was stationed at Travis Air Force Base back in the ’60s. Guess what we said. Keep a lookout for them and thanks again, Doug.

Along the same lines is a letter we received from Martin Kocher last week. Martin had sent us some shots last Christmas that were taken at the lakes right after the war and had just rediscovered a  print that he thinks was taken in ’39 or ’40 (MKC_045). Our checking of the front plate says it was a 1940 shot. The boys in the shot were Bob on the right and Rod on the left (Martin’s brothers) with his dog Red next to him. The car is most likely a 1926 version of Henry’s famous T with what was featured a runabout pick-up body or roadster-pickup. This puppy cost all of $366 F.O.B. Detroit when new. Note the balloon white wall tires, chevron on the radiator, checkerboard graphics on the hood and best of all Spade, Club, Heart, and Diamond on the cowl. Thanks for thinking of us Martin.

MKC_002 is one of Martin’s Christmas shots featuring James Tucker of the Bungholers. Looks like James is getting last-minute instructions before heading through the traps at El Mirage on April 24, 1946. Under the hood was a Ford B Block topper with a Riley 4-port head. James ran 106.38 mph.

While on the letter theme we got another one from our Florida connection, Jere Sheehan. Jere had just found a seven-page story published back in the day called “I Remember the Green Monster” written by a new England Scribe named Ed Sarkissian. He sent a xerox copy of it that we will retype and post for you down the road.

This last weekend was El Mirage time again and is the cause of a day late story, Yep I was too tired to finish it last night. This time the meet wasn’t blown-out and to many shots were taken as a new 300 mm lens was being road tested to figure out how it worked. And yes it’s gonna be perfect for Bonneville. Lets’ look at some of the experiments.

We were about 100 yards away when this shot of Derby Pattengill and his Class B Blown Fuel Modified Roadster were captured at El Mirage about 7 AM on Sunday morning while he was enjoying a cup of coffee before racing gets underway (JMC_4802). The Autopower Bean Bandits entry was running on a stiff 266.998 mph record.

We see the Cummins-Beck-Davidson-Thornsberry ride being pushed into the Inspection area at El Mirage on June 22, 2014 (JMC_4798). Were about 80 feet away from it. The car happens to be the World’s Fastest Hi-Boy Roadster after running setting a 301.150 mph record at Bonneville in October 2010. At El Mirage their record is 256.410 mph so this is one serious piece of machinery.

After trying the basically static shots it was time to see if we could capture some cars in motion and keep them in focus. It looks like everything works so far. We see Gary Sutliff being pushed about 100 feet from the starting line at El Mirage in Klos-Sutliff-Spacek Class V4-VOT (JMC_4806). The car is powered by a Ford Model B fitted with a Riley 4-port head.

Next up we see Don Ferguson III pushing on the skinny pedal on the right to break loose the rear wheels slightly after leaving the push g the push e push truck at El Mirage on his first run on June 22, 2014 (JMC_4803). The car traditionally has been powered by a GMC-6 or Ardun V8 but now sports a turbocharged Honda courtesy of the Hondata folks. The car carries the entry name Ferguson-Macmillian and runs as a Class F Blown Fuel Streamliner. At the blown out May meet the car ran 219.505 mph on the current 211.180 mph record. Look for big things with this engine package when they get it sorted out.

Since it looks like the new lens works fine it was time to change back to the regular one (18-105 mm) to see what kind of trouble we could find. JMC_4808 reveals Matt Weldmann’s Triumph powered Class 250cc A-PG bike called “Wheel Tramps TR 250”. The Land Speed Racers Club member stands patiently between wind-gusts and spin-outs before it was his turn to ride. Matt is gunning for the 100.889 mph class record. In the rear is AHRF contributors Bob and Annette Barmore’s flathead powered “Streamliner”. The car is a scaled down version of a NASCAR type Ford Collection. Since no body parts are of OEM dimensions and the wheels are covered it fits in the streamliner class. Annette’s been running in the 150 mph vicinity with it or about 60 mph under the established record.

After more than a few years in the build stage, the Kent Fuller and Family’s flattie powered Streamliner called “Smoke and Mirrors” makes its debut at El Mirage on June 22, 2014 (JMC_4805). Steve Fuller is seen being pushed to the starting line by Don Tubbs in the GMC before driver Andy Davis gets buckled in. After losing a couple of engines on the Dyno the team’s luck wasn’t with them at Mirage as the engine went south right off the line. Bummer. On the right to witness the debut is inspector Bruce Vaughn in his dayglow hat and Ron Main.

Dick Martin on the left is seen talking with Steve Fuller before the “Fuller Smoke and Mirrors Streamliner” makes its maiden run (JMC_4804). For years Dick has been writing great stories in Rod & Custom about landspeeders and is like us wondering why the magazine has been “killed”. Note that he is doing a little advertising for us by wearing one of our AHRF t-shirts. Steve is relaying info on his dad Kent and the efforts it took to get the car to the starting line. 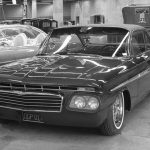 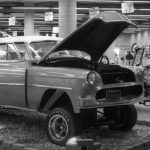 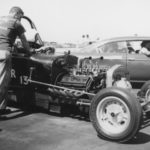 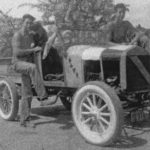 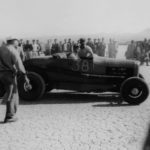 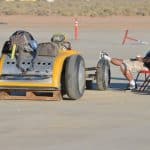 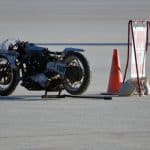 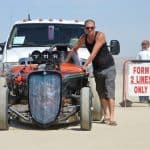 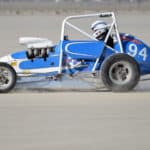 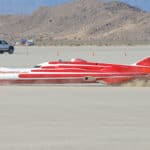 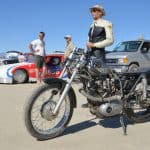 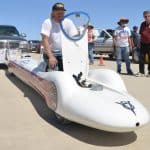 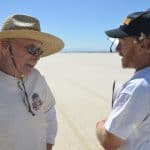