This week we’re going to take a look at some images that we’ve collected that are not your normal we’ve seen them before stuff. Some are simple scans and others have required quite a bit of work on our part to bring back to life. If we’ve done our job correctly with this week’s eclectic mix of words and pix, the next time you see something that you would normally not pay any attention to, you may end up taking a second look and discover something inspirational.

JMC_4871 came out of my dad’s collection and I never paid much attention to it because it was ripped out of an old album and pretty much destroyed. After looking at it a little closer we discovered that it was more than a little special. JMC_4874 shows the shot after a considerable amount of time was spent putting it back together. What we’re looking at is a 1930 Ford Cabriolet Model 68-B that they made 25,868 of. We know it’s a ’30 model because of the shorter splash apron that only went to the leading edge of the front door instead of the ’31 piece that went all the way to in front of the cowl and fender. In March 1931 Ford introduced a new version of this basic Cabriolet design that was first seen in ’29. With the new model, Ford slanted the windshield back a bit to make the car look a little more modern and called it the Model 28-C. As you can see in the restored picture, the layback concept has been done to this car but about twice the degrees as the ’31 model. You will also notice that it’s also gotten a nice top chop as well. JMC_4870 shows the same car in another pix from the same scrapbook at another angle. We get a lot better look at what a little custom work can do and turn a run of the mill old Ford into a real looker. We did some digging and found Cad’s and Chrysler’s started the split windscreen fad on their high-end models in the early ’30s. This split, v’ed windshield style would eventually trickle down to the cheaper production cars, Chevy in ’35 and Ford in ’37. This mod looks just like something Steve Moal would do to a ride these days so we’ll send him a copy for inspiration. The sad part is I don’t have any history on the car except that it was photographed in my grandfather’s driveway before WWII. The only living souls that might know anything about it would be Jim Travers and my Aunt so I’ll see what I can find out about it for you.

Next up is a cool shot we got from Eddie Edmunds awhile back (EDM_032). It shows one of his mechanics in a PR shot fiddling with a dual carbed setup on one of his intakes while another intake manifold is strategically placed on the fender to make sure you can see it.

This is a setup for our next obscure image that we found in a newly acquired copy of the November 1952 issue of Motorsport Magazine (JMC_4865). It’s an advertisement for some of Eddie Edmunds go fast parts. He had moved from Oregon to Los Angeles in the late ‘40 and started producing cylinder hears, intake manifolds and dress up goodies for almost every kind of car. You could get an intake for a Chrysler, Ford, GM, Hudson, Kaiser, Nash, Packard or Stude for as little as 40 bucks. We think finding the odd stuff, like this ad, adds some depth to our sport’s

sletter (JSC_033). We found a little blurb about Mickey Thompson’s new four wheel drive Dragster that he might possibly show up at the NHRA Nationals, or as they called it then, the “Big Go” to be held on Oklahoma City from August 28th to September 1, 1958. Along with a picture of the Mickster sitting in his being built ride there was this thumbnail shot of a proposed body shape for the car that you see here. It looked pretty swoopy. The finished car ended up with a different body than seen and Thompson stopped off at Bonneville on the way to the drags to see what the car would do. After cutting up the front bodywork to get some extra tire clearance the car ran an amazing 286.85 mph to take first in class. It would later 2-way and set a new Class E record at 266.866 mph. The car was powered by two Voight built injected Chryslers displacing 850″. Mickey never made it to Oklahoma, and when he got home his success at the salt said if two is good then four would be better. Needless to say he started building Chal history.

We got yet another package this week from our friend down Florida way, Jere Sheehan. Being a founder of New England’s first drag strip had its perks as can be seen in our next image (JSC_034). Way before there was such a thing as National Dragster the NHRA produced a newsletter called Drag Link and Jere just sent us 26 of them. Starting with Volume 1, Number 2 from July 1955 and going through Volume 3, Number 11 from November 1958. What’s great about them is the information inside them. It gives the Safety Safari Schedule, lists the sanctioned strips and when their meet will be held and tons of long lost info that only fools like us would go crazy over. How many of you know that one Eric Rickman was on the Safari and even took motion pictures, or that Don Morgan from Amarillo, Texas was first in Class B Hot Roadster at Great Bend in October ‘55 driving his ‘31 Ford powered by a ‘46 Ford after running 110.70 mph.

JSC_033 shows another cool find from the cover of Volume 3, Number 5 of the NHRA Newwlenger I and took it to Speedweek ’59. The rest is history.

While we were scrounging old magazines last week we also ran across our next image (JMC_4862). We had never heard of or seen Volume 3, Number 5 of Hot Rod Parts Illustrated from June 1964 before. The magazine was done in Southern California and published by one Jack Chappell. For a Tech editor he chose some not to famous engine builder by the name of Ed Pink. Like we said, we learn something new every day. On the cover is Bobby Marshman’s Lindsey Hopkins owned Offy-powered ride seen during practice for the 100 mile Phoenix Champ Car Race that was run on March 22nd sporting the new for the day low profile Firestone tires that were to make waves and fast speeds at Indy two months later. Bobby qualified down in 13th starting spot in the Hopkins Special and brought her home for a seventh-place finish.

The cover and race story was great but we found something even cooler inside the above magazine and that was an in-depth the 6th Annual Smokers Gears Ga story of the 6th Annual Smokers Gas and Fuel Championship race held at Meadows, Airfield that we now call Famosa or Bakersfield. Inside were detailed lists of who ran and who won. JMC_4875 shows the first round of Top Fuel eliminations for you lists guys. Names, speeds, drivers, everything you’d ever want to caption a photo with. Databases were invented for just this kind of info. Cool.

Last year we scanned a bunch of cool pictures we had borrowed from Marty Clampitt. More than one of them was Gold to us, but CLA_052 was extra special. Shall we say welcome to Riverside International Raceway in 1960 and a shot of one historical vehicle? It’s called the CERV-1 and was the brainchild of one Zora Arkus Duntov, creator of the Ardun flathead and guru of all things performance for the Corvette. The Chevrolet Experimental Racing Vehicle number one (CERV-1) was built at the Chevrolet Engineering Center in Warren, Michigan and was a testbed for things Corvette to come, namely the ‘63 Stingray. The rear engined car had a space frame and a special 283″” V8 that weighed only 350 lbs and put our 350 hp. The secret was that the block and heads were cast in aluminum and the total weight of the 96″ wb car was only 1600 lbs ready to run. Racing Legend Stirling Moss, at the track for the October 16th Grand Prix for Sports Cars, drove some laps in the car and praised the handling. Duntov drove it in an exhibition before the race in front of the gathered masses and wowed them with the car’s futuristic looks created by Bill Mitchell.

Meanwhile back to another scrounged magazine image for our last image today (JMC_4869). We found this great cutaway drawing in Moteurs Courses magazine published in France back in 1957 (It was a $2 magazine when we mortals used to pay 25 cents for ours so we don’t think many folks ever go to see it).  Italian illustrator G. Gedo shows us the inside workings of the famous Chevrolet Corvette SS that showed up for the Sebring 12 hour in March 1957. The experimental car didn’t get very far in the race as the brakes were junk and the magnesium body acted like a heat sink and toasted the driver but boy did it sound mean and look sexy. An industry-wide U.S. Automaker ban on racing ended any further development of the car so who knows what it would have turned into. A duplicate of the car called the “Mule” was later used and raced by Bill Mitchell, head of GM’s, design. It raced under the name of “Stingray” with a new body concepted by hot rodder and Cobra Daytona Coupe designer Pete Brock, and refined by hot rodder Larry “Chopsticks” Shinoda morphed into the ‘63 Corvette Stingray. This was another one of those time consuming scan-retouch jobs because the illustration was on two pages and we had to re-create the slice down the middle that was missing. Trying to leave no stone un-turned we did a search for a G. Gedo and found he was doing cutaway drawings of Grand Prix cars as far back as 1937 but found nothing more. 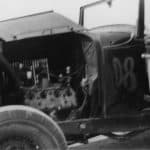 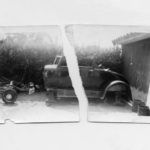 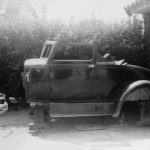 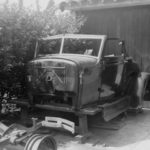 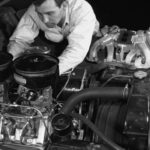 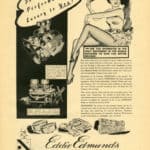 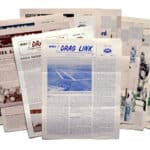 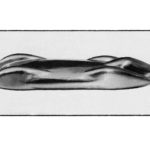 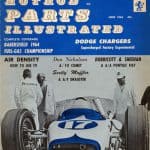 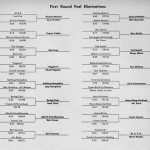 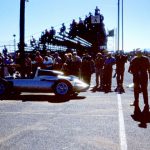 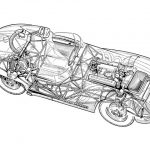 Previous Post: « I Could Have Been in Perris
Next Post: Maybe Italians Own This Week »
↑ Top of Page