Around here we’re suckers for anything that has to do with cool cars. In our travels this week we ran across a couple of goodies that said take me home to scan so that’s what we did. Let’s have a look, shall we?

Since we’re talking about slippery vehicles get a load of Lee Chapel’s Class C Streamliner that’s seen on its trailer at Bonneville in 1951 (MBB_350). Look closely at the profile of the car, it’s a classic wing shaped lifting body. Like most of the early streamliners, this one flew a couple of years later when the air going over the top of the body was moving faster than the air going under it and created a low-pressure area on top to create lift-off. Lee made up his own set of OHV heads for the 296″ Mercury flathead block that powered the car and it was clocked at 174.418 mph for first in class.

Lee was no stranger to the go-fast world having been a pioneering speed shop owner and racer himself. He started racing at the dry lakes in the early ’30s and graduated to places like Ascot and Silvergate Speedways among others. He even cast up his own heads called “Tornado”’s for the 1914 to 1928 Chevrolet 4-cylinder engines. We lucked out and found a shot of one of them for you (DBC_1188).

We also found this shot of Lee’s his dirt track cars taken back in 1934 at the old Silvergate Speedway down San Diego way (where Sea World is now) (DBC_819). The young chap behind the wheel is 21-year-old Duke Dinsmore. Sorry guys, we don’t know who the lovely lass is but we wish we did.

In the late ’40s the U.S. was being invaded by some low cost “Sports Cars”. Before long these “Tea Bagger” rides (mostly M.G., Jaguar, Allard, etc.) were the thing to have if you wanted to go road racing. It didn’t take long before Rodgers jumped on the bandwagon. In FCH-002 we see Santa Monica’s Phil Hill is on the pole for a trophy dash at Carrell Speedway driving his $1,500 Alfa-Romeo 8C-2900B. On the outside is D. G. Thatcher’s rod built from an old sprint car that had been widened. Power was supplied by a ’37 Ford flattie with dual carbs. Hill won the shoot-out in this February 25, 1951 shot. In the background is a real assortment. On the right we see Ted Cannon’s “Cannonball” or “Vacuum Sweeper” used sports rod and a ’30 Dodge chassis with a Merc flattie for power. Next is a Crosley “Hot Shot” with a 44 ci. engine. Next, a ’34 Ford with soft-top is hiding next to an M.G. TC. A brand new white Jag XK-120 with rear fender skirts sits next to another TC. An Allard, based on a ’32 Ford chassis is next. Last, are two more MGs.

Before you knew it the Foreign Jobs were getting new lighter bodies and American Iron for power. A few enterprising souls even built up their own from scratch. On such ride was Chuck Manning’s home-brewed Sportster seen at the Fourth Annual Sports Car Races at Palm Springs on March 23, 1952, where he finished first in class and first overall in the 44 lap main event (GGC_426).

While acquiring the above postcards we also found a slightly used up 8” x 10” glossy of the Manning car with Chuck behind the wheel at Torrey Pines (JMC_5352). The photo was taken by a “Peters” for Trend, Inc. (Robert E. Petersen) and was used various times back in the day. It was used in “Wheelspin” on December 21, 1952, and also appeared in the March ’52 issue of Auto magazine. The crudely retouched print still has the crop marks in grease pencil on it. Cool.

Below is a story on the car that was glued on the back.

Another new car that made its appearance at the last three local events is the Chuck Manning car. All three showings have been good considering that both the car and driver are new.

The 100-in. tubular frame is constructed similar to the Seifried car, parallel 2 3/4 in. tubing one above the other. Manning is a stress engineer for an aircraft company and computed that his maximum stress on the frame would be 5,000 psi. With this in mind, he purchased low carbon steel tube and pocketed the additional cost of chrome-molly.

Both front and rear suspension are stock ’39 Ford with every other leaf removed the springs to compensate for the lighter weight (1,700 lbs.). These are to be changed for the coming season to a half-swing front axle and a half-swing rear with a quick-change straddle section. Steering is stock Ford with a longer Pitman arm. Tires are 6.00 x 16 front and rear. One other modification was the fitting of Alfin drums.

The engine is a 59A Mercury block with a displacement of 259 cu. in. Weiand heads and manifold are used with an Iskenderian track grind camshaft.

Manning claims that is total cost is not over $700.

Last week we showed you a picture of a scratch built sports car that was shot at a place called the “Bunker” located on the North side of the Burbank Airport. We shot a picture of the same room at close to the same angle for you 60 plus years later (JMC_5254). The space is still occupied by car guys, some going back to before WWII. One of the special guests was Louie (Ansen Automotive) Senter (in the red sweater on the left) who raced at Southern Ascot as a youngster. The place got its name back during WWII. When Lockheed finished assembling their P-38’s they’d wheel them in and test fire the machine guns to make sure they’d work. Yes, the walls are super thick.

Normally occupying the party space is a Sprint Car seen in our next shot (JMC_5255). All it takes is one look at the name plastered on the top of the cage to know we were in the presence of Royalty. Wally Pankratz does the driving and has a school that teaches new blood how to circumnavigate “Bull Rings”. Way Cool.

We just had to dig out a shot of Wally’s dad for you in one of his creations. Yep, Bob Pankratz was a formidable shoe of the day and an expert body man to boot (BHC_264). The car is one of Charlie Allen’s early rail jobs that Bob re-bodied. His signature style can be seen in the down-swooped tail and headrest behind the driver. Bob autographed the shot to Stan’s Auto Body Paint Shop who did most of the famous cars of the day’s paintwork.

After doing a hundred or so slides this week we dug out some larger format neg’s/tranny’s for a change of pace. First up is one of George Callaway’s negs that probably hasn’t seen a protective sleeve on it for about 30 years. We see Ron Manke on it of off the line in the Cerny-Manke-Lins rail circa 1969 (GCC_449). Wes Cerny built the Nitro-fired blown 392” Hemi nestled in the Woody Chassis.

Our next victim is this 4′ x 5″ color transparency taken at Lions Drag Strip back in 1967 (GCC_444). It was water damaged and had a nasty orange color shift It but we managed to do a little fixin’ for you. We see a hard to find shot of Jess Tyree’s first version ’67 Pontiac Firebird leaving there starting line. The Fullerton based car was powered by a supercharged 428″ Pontiac that fed the rear wheels through an automatic trans. We have the car running a quick 200.44 mph in 7.600 seconds that year.

Once a month a bunch of car guys and gals get together for a brunch to basically bench race and swap unwanted goodies. I returned home with a couple of years of Classic Cars from the early ’70s. There was a two-part story on Barney Oldfield and it featured a couple of our pal Joe Henning’s illustrations. One we had never seen before so it was resto time for another great piece of art showing the Barnster plying his trade in a Christie Front-Wheel-Drive almost a hundred years ago (JMC_5353).

December 7 is a special day so Thank You to all that have Served! 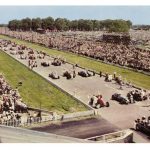 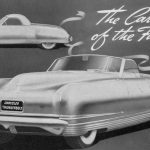 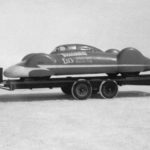 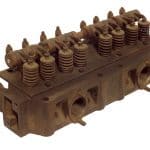 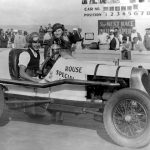 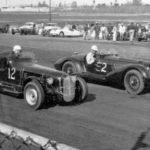 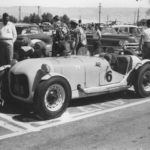 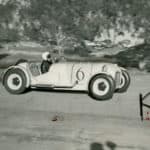 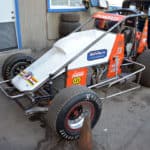 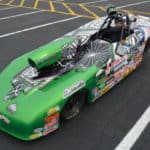 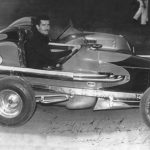 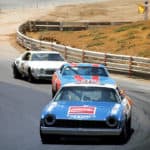 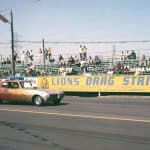 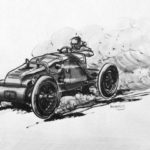