One of the challenges we face all the time is putting together pieces of the hot rod puzzle. It real life when you get a puzzle you unbox it and sort out the edges and assemble them to give you some parameters to work within. In our case, we can’t begin to define borders let alone figure out all the pieces.

A while back we picked up booklets done in the late ’40s that were published by Newhouse Automotive Industries. Since then we’ve found some more Newhouse goodies that begin to tell a little story. Where or when it will end we don’t know because we’re always finding new pieces. Let’s have a look at a few.

Newhouse Automotive sponsored the bellytank seen at Bonneville in our first picture today (MBB_161). This ’52 shot shows the car wearing the numbered 636 and had a graphic painted on the nose and a Sta-Lube decal added. The program said it was powered by a 296″ 1942 Ford and was to run in Class C Lakester. So far, so good. A look at the results didn’t show the car having recorded a speed. Can we assume that it had engine trouble and didn’t make it through the timing devices? That the fun and the frustration of having a few but not all the pieces. In ’51 the Newhouse team had shown up with basically the same car (we have pictures of it). It ran as car number 36 (they had just added a 6  in front of it for ‘52) and was powered by a 296″ Merc Flattie. Top speed was 163.339 mph for a sixth in Class C.

We can add a little more to the Newhouse story with our next overhead shot was taken at the Shrine Auditorium back in 1950 (REP_071). We got the shot from Pete (Robert E.) Petersen who was involved with producing it. He had Tom Medley go around the show (Hot Rod Expo III) and shoot a bunch of posed and unposed shots of which this is one. From the balcony, we see the Newhouse booth and a display of their go-fast parts. If you check out the girl under the awning covered area then look real close at the sign in front of her, it reads Speed and Power Handbook only $1.98.

Segway to the next image (JMC_5523). Surprise, this is a mint copy of the second revised edition of the Newhouse Automotive written Speed and Power Handbook that was originally written back in 1948. Our copy has a price of $2.50. Were the dumping the first editions for a buck 98 at the show or was it also a steep $2.50? There is lots of cool stuff inside including how to get better mileage, hop up your mill, add a supercharger and extra carbs, and let us not forget a section on that mysterious “Hollywood Styling”. To add some frosting to this “find” the original owner had pasted three photos on the inside front cover to make this one a keeper for sure.

Here’s one of those photos that were pasted inside the Newhouse Handbook (JMC_5527). You’re looking at the rump of a ’46 to ’48 Buick Super of the fastback kink. Those with sharp eyes will notice the side trim has been removed as well as the decklid chrome. Even Harley Earl’s reflectors have been removed from the rear fenders to give the car a sleek, sleek look. It’s interesting that the door handles and lock have survived. The super-peeper folks will notice the notched rear bumper to clear those after-market dual pipes. We’re guessing the shot was taken in ’48 as the plate has the ‘48 and later bolt-on tag. The other two inside cover shots show one plate that also had a ‘48 tag.

The El Mirage Results are posted so we could proceed to ID some of the shots we took last weekend. So you need a little extra horsepower? Steve Tillack has put together a super-sano Datsun 240Z to run in Class F Blown Gas Modified Sports (JMC_5530). For an engine he chose A Toyota 2JC inline-6 (that makes 2 roadsters and this car running them) that puts out gobs of ponies. On Steve’s first run Sunday morning (July 12, 2015) he had a big dust problem inside the car and did a herculean job of keeping the car straight and stopping it. When we pulled up after his run and opened the doors the dust just billowed out of it. Word came that he had run a lap at 171.369 mph (he’s always off someplace painting a car or chopping a top).

Last week we posted a shot of the Kenz & Leslie liner (KCH_002). Mike Nicholas of Nick’s Hot Rod Garage (and the promoter of the Hot Rod Hill Climb in Colorado) came back with an ID of the wild shirted dude as Don Joy and the pickup in the background as belonging to Frank Liston. Kudos also to Dan Fleisher for confirming that it was indeed Ed Haddad all crossed up in the Willie Utzman car (JHC_792). We can’t say thank you enough to all of our friends out there for helping us get the facts right.

Talking about getting things straight here’s another new Mark Karolchik shot of the K&L liner taken the same year. (KCH_013). Roy “Multi” Aldrich was the official greeter at Bonneville for many years. He’s seen here in his T parked to Willie Young sitting in the Kenz & Leslie Streamliner at Bonneville in 1952 (we previously thought the shots were taken in ‘51 but that yellow ring around the front exhaust pipe (hidden in last week’s B&W shot) was at a 172.515 mph record that’s been the book since October ’94. We predict that he will grab the record at the next lakes meet.

One never knows what’s gonna appear for a trip down the track at El Mirage. Longtime racer Bill Chambers showed up with this wild looking trike (JMC_5531). It’s seen at the starting line waiting for the all clear down the track. Since there is no class for trikes (where’s Artie Johnson when you need him) he had to run it as a Time Only entry. He drove it through the traps at a respectable 125.102 mph.

Here’s a great shot of Jim Hahn’s California Special taken at El Mirage during the June 14th (last month) races. This is one rare Stang as Ford only produced 3867 of the GT/CS’s in the model year 1968. Jim drove it through the lights at a speed of 179.597 mph on a 194.271 mph Classic Gas Coupe record set way back in November of ’02. Gene Winfield did the fancy fade job and Dennis Jones applied the Galpin signage to make one slick looking ride. Gene is slated to drive it if he’s ever inded in ‘52). Willie ended up the week with a one way run of 252.20 mph and a 244.66 mph record to become the fastest Hot Rod in the world. Behind the liner is the yellow Class C lakester wearing number 8 of the Stanford Brothers that in its past life was painted purple and driven by Bill Phy. The car ended up running 169.97 mph for a second in class.

Last week we mentioned that Mark had also sent us some other goodies. One was a pre-WWII scrapbook filled with newspaper clippings. Our next image shows an interesting one from 1938 (KCK_085). It clipping’s caption mentions driver Jim(my) Jurgens in his black Diamond special and that Roy Leslie (yes the same Leslie in Kenz & Leslie) was also going to drive it. Former research on our part found that Black Diamond was actually Black Diamond Coal Company and was owned by Jurgens. Roy would also go on to be Midget Champ at Merchants Park in ’38 driving for Jimmy.

Next up from Mark is this rare Roadster Racing Program from Englewood Speedway, Colorado (KCH_026). We’ve guesstimated the program dates from May 14, 1948. The races were promoted by the Colorado Automobile Racing Club who’s President was Lafe Ellsworth. The Club was in its fourth season of racing and would hold race programs at Ord, Nebraska on the Fourth of July and Rock Springs, Wyoming on Labor Day later in the year. Can we say the hot rod puzzle just got bigger?

We know Gow Jobs go back a long way but this one is something special (JMC_5528). The back of the shot was even kind to us as it had the date 11-23-24 written on it. There were other notes on it that we couldn’t decipher but we made out the word Kissell. Out came our old Tad Burness reference determine that this was indeed a Kissel built before ‘24. Because of the short wheelbase. we’re guessing the builder started with a “Gold Bug” before dumping the fenders and scratch building the body from the rear of the hood back. The headlight buckets look like the’re off an earlier ’19-’22 model. Our driver is probably thinking “Try and catch me”.

While on the Gow kick let’s fast forward to the late ’40s as we check out this ’27 body on a model A chassis stuffed with a 24 studder (MBB_505). We’ve dated the shot to ’48 and with the other shots that were with this one, we bet our shooter was on a side street in Los Angeles near the National Guard Armory on his way to attend the First Hot Rod Expo. We like the rag over the carbs to keep foreign objects from magically being sucked into them while parked.

Back in 1968 Rod & Custom Editor Bill Neumann shot this interesting street rod from Washington State called Surfin’ T (NEU_417). Aren’t you glad the headrests and wild paint jobs are a thing of the past?

Talking about the past we just snagged a bunch of NASCAR programs from the last century for you (JMC_5529). What makes this bunch of programs special is that they are all illustrated. In the upper left is the oldest that dates to the First Motor Trend 500 back in 1963. The last is the newest and is from 1978, a mere 37 years ago. If you look at the fourth cover in the second row it shows a nice rendition of the King’s Petty Blue and STP Dayglo colored Dodge in January 1975. Our next image shot by George Callaway shows Mr. Petty winning that very race in the car that was illustrated on the program cover (GCC_249). We call that cool.

Least we not forget, our last shot for this week shows an even earlier version of a stock car racing machine. The Petty shot was taken 40 years ago. If you subtract 40 years from 1975 that takes you way back to 1935. The closest we can get to that is 1934. CKC_1007 transports us to the 250 mile AAA Sanctioned Championship Stock Car Race that was held at Oakland Speedway on May 6, 1934. Bet not too many of you remember that race. We see driver Jack McNamara behind the wheel of his Stewart Chevrolet of San Francisco sponsored roadster. After stopping multiple times for water and oil Jack dropped out on the 227th lap when he lost a connecting rod. One wonders how many people will even know what a connecting rod is in another 40 years let alone a car. 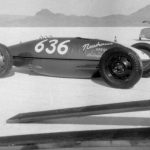 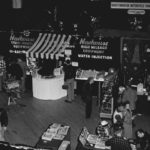 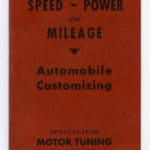 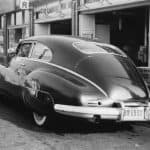 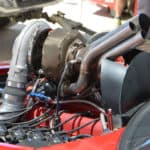 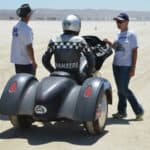 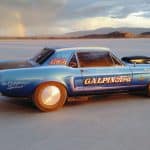 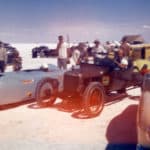 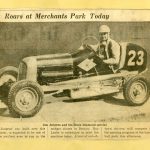 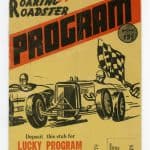 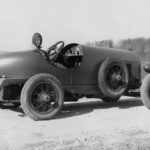 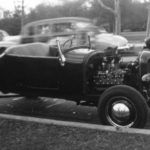 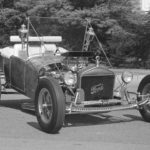 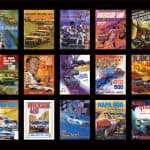 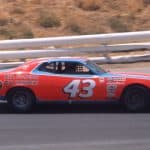 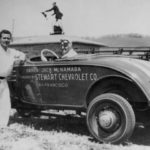